In April, Florida, eighteen-year-old Austin Hatfield captured a water moccasin, also called a “cottonmouth” snake, and decided to keep it as a pet. He stowed the snake in a pillowcase, and two days later took it out to play.

Hatfield allegedly kissed the venomous snake on the head and mouth twelve times before it bit him on the lip. He was taken to the hospital in critical condition, and the snake was killed.

After multiple anti-venom treatments, Hatfield was able to recover. However, he faces charges for handling the deadly snake without a permit. This wasn’t Hatfield’s first foray into snake-kissing, though hopefully it will be his last. 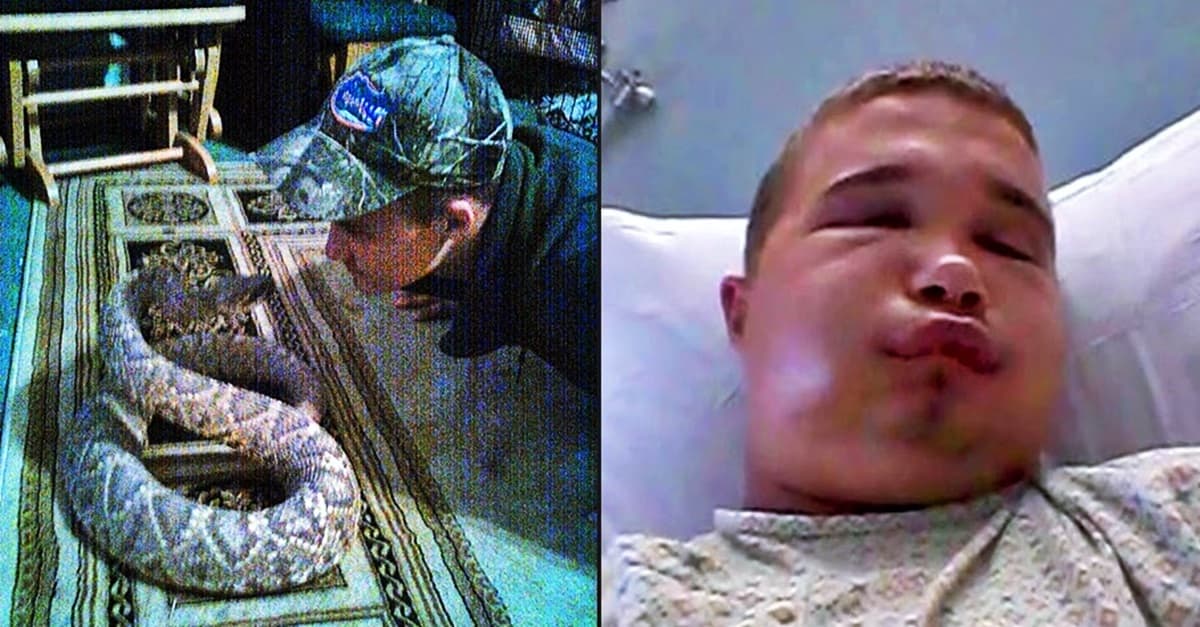 On the left, Hatfield kissing a rattlesnake, via Facebook. On the right, Hatfield at the hospital after being bitten by a water moccasin.

Snakes, especially those of the venomous variety, are best left in the wild.

While snakes may seem scary, they actually play a crucial role in the ecosystem. Many prey on “pest” species — like rodents and insects — and some are important prey for larger predators. Certain nonlethal species even hunt venomous snakes, which may actually help reduce the chances of a deadly encounter with a human.

The odds of being bitten by a snake are actually already quite low — but your odds substantially increase if you attempt to handle, harass, or kill a wild snake. So if you see a snake in the wild, or even in a residential area, let it be. Nonviolent, respectful coexistence is the key to living near any wildlife, including snakes.

What happens if you have a chance encounter with a snake?

Snakes are found almost everywhere in the world, and live in virtually every type of ecosystem, including many residential areas. Sometimes they’re hard to spot, and certain snakes are nearly invisible in their natural habitat. So accidentally encountering one isn’t out of the question.

However, only about fifteen percent of snakes are venomous. If you run into one, odds are it won’t be dangerous — but if it is, you’ll want to know. 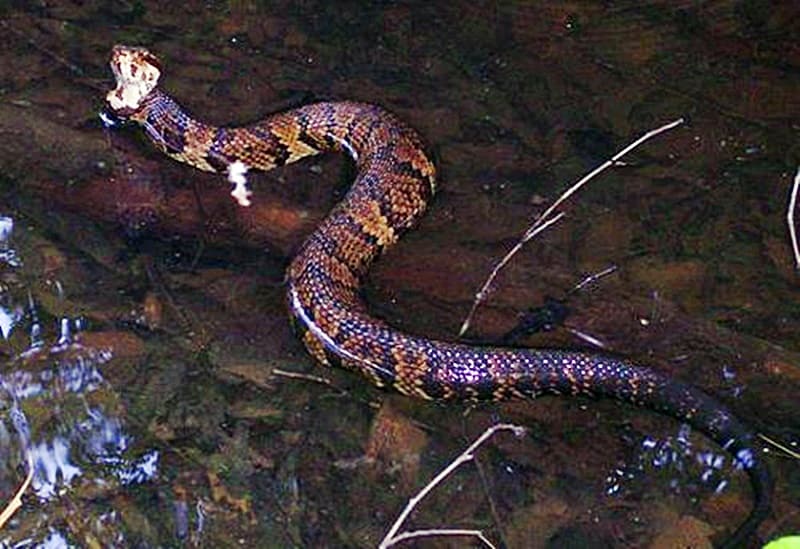 If you see a snake, maintain a safe distance, and allow it some room to move around. If it is startled, it may take up a defensive position, or dart to the nearest cover. If there are bushes or some other cover nearby, try to give the snake an open pathway toward it, and avoid cornering it in any way.

Eastern coral snakes, who often defy the rules of venomous snake exposition, have two non-venomous counterparts with suspiciously similar appearances — but with some key differences. Coral snakes are venomous, and have black snouts. Scarlet snakes and kingsnakes are non-venomous, and they have red snouts. 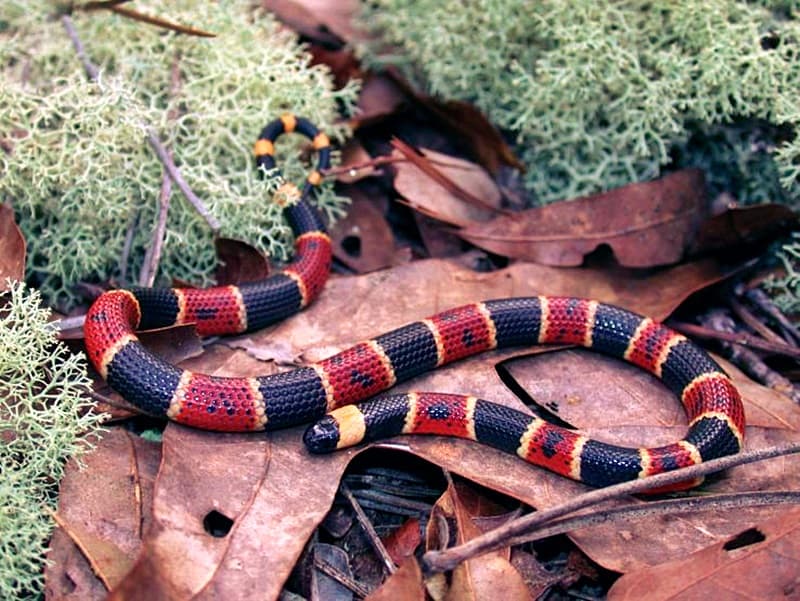 Though the best way to identify a red-, black-, and yellow-striped snake, like coral and scarlet snakes, is to remember the old mneumonic rhyme (surprisingly, it holds true):

“Red on yellow, that’s a deadly fellow; red on black, cut him some slack!”

You’ve identified the snake. Now what?

Whether you’re indoors or outdoors, if you think the snake is poisonous or you aren’t sure, stay back and contact a professional. Most areas will have snake removal services, which you can find with a simple search engine inquiry.

If you’re outdoors and come in contact with a non-venomous snake, the best thing to do is to leave it alone — a “live and let live”-type situation. However, if you feel you absolutely must get rid of it, you can gently spray it with a water hose to drive it off. 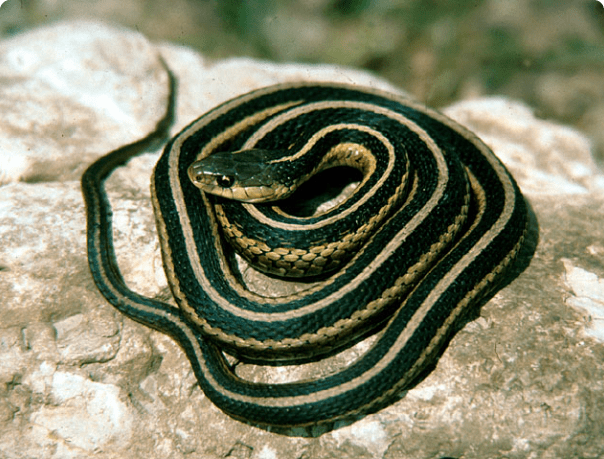 When there’s a non-venomous snake in your house, it may be prudent for all parties involved to release the snake back into the wild. You can do this by placing a large (empty) wastebasket on the ground, and sort of corralling the snake into it with a broom.

If space doesn’t allow for this technique, you should be able to find humane snake glue traps at your hardware store. Check the traps daily, and once you’ve got a snake just bring it outside and pour-over some vegetable oil to release it from the glue.

What if you get bitten by a venomous snake?

As always, preventing a deadly snake bite is your first line of defense for stopping one. But there’s always the chance that, no matter what you do, for whatever reason, you or someone you know might end up getting bitten by a snake.

If that happens, get the victim away from the snake (to avoid further biting), then do this:

Venomous snake bites are incredibly treatable, and only an estimated six people die from snake bites per year. That’s even less than lightning strikes and dog bites. It’s very unlikely a snake bite will turn fatal (even Hatfield survived a cottonmouth bite to the face) — but if you or someone else gets bitten, even if you’re 99% sure that the snake is non-venomous, you should seek immediate medical attention. Which brings us to: 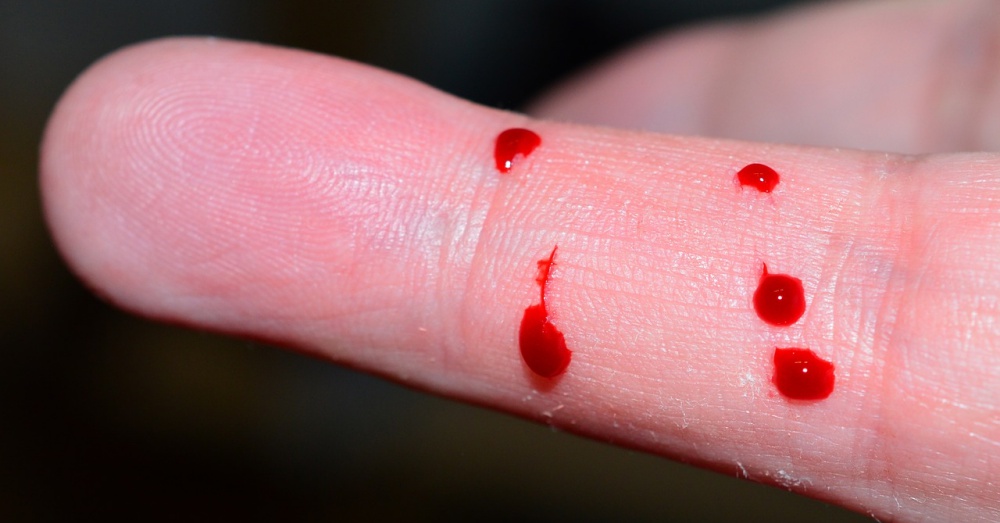 If you’re in the United States, your first phone call post-bite should be to 911. Find out to which emergency room (ER) they plan to take the bite victim. Then, call the Poison Control Center’s National Hotline at (800)222-1222. Give them the name and number of the ER, and request for a toxicologist to contact the hospital so they can collaborate on treatment efforts.

When your pet has been bitten by a snake, call the emergency vet, then the ASPCA Animal Poisoning Hotline at (888)426-4435 (they do however charge a consultation fee), carry your pet to the car, and immediately take him or her to the veterinarian.

Third, tend to the victim until help arrives.

It is vitally important to keep the snake-bitten person or pet calm. Venom must enter the bloodstream to be effective, and it will work faster if the victim’s vitals are more rapid than usual. Limit his or her physical activity to keep the heart beating normally, and keep the site of the bite lower than the heart.

Swelling is common in venomous snake bites, so remove any potentially constricting jewelry or clothing. Clean the bite wound with soap and water (if there’s time). Take note of how much time has passed since the bite, and keep a record of any symptoms that the victim is experiencing. Document any first aid you have administered, and record any allergies or medical conditions that the victim may have. All this information will help medical personnel to better treat the bite. 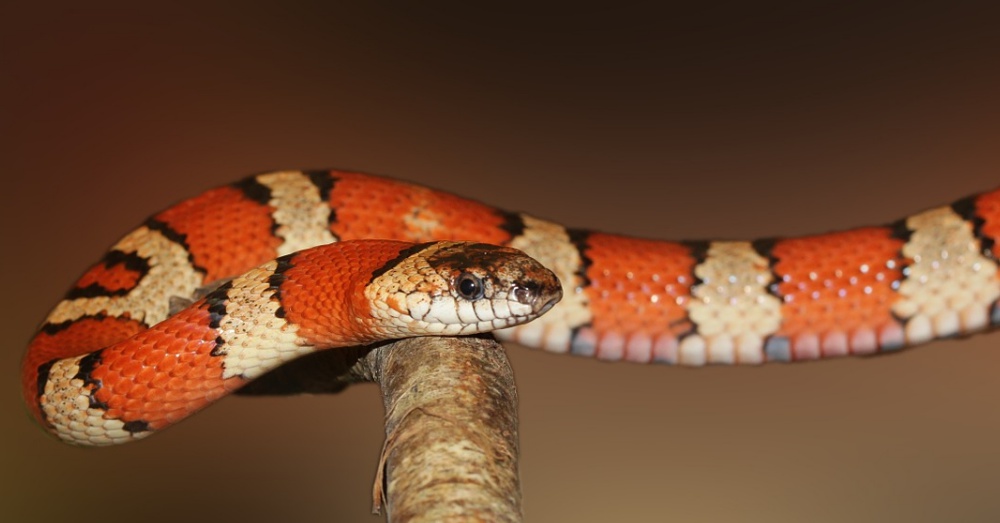 Now some things you shouldn’t do.

Don’t try any at-home remedies for removing the venom. Old-fashioned treatments, like making an incision at the wound site and attempting to suck out the venom, often do not work, and may result in worse damage to tissue or the loss of a limb.

Do not give the victim any stimulants or alcohol, as these can accelerate the venom’s effects.

And finally, don’t try to capture or kill the snake. It’s not necessary to treat the bite, and can result in another one. If the snake appears dead, it may still be dangerous — some snakes can reflex bite and inject venom for up to an hour after their death.

Mostly though, don’t let any of this scare you!

Snakes are generally harmless if you let them be. So be smart out there this snake season, and if you see one minding its business out in the wild, say hello and move along.

The Rainforest Site is a place where people can come together to protect our environment for generations to come. In addition to signing important environmental petitions, shopping for the cause, and learning about the natural world, visitors can take just a moment each day to click on a green button to preserve vital wildlife habitat. Visit The Rainforest Site and click today - it's free!
Whizzco for FAP
$75M