These Kittens Are Prepared To Compete Against Each Other For The Cutest Reason Ever!

The Summer Olympics are almost underway and with plenty of controversy going on in Rio, you might be looking for something a little “cuter” to watch. Every year many organizations use the hype as a way to raise awareness for their cause, such as animal adoption. This year, a special group of kittens will take the stage for Hallmark Channel’s very first Kitten Summer Games. 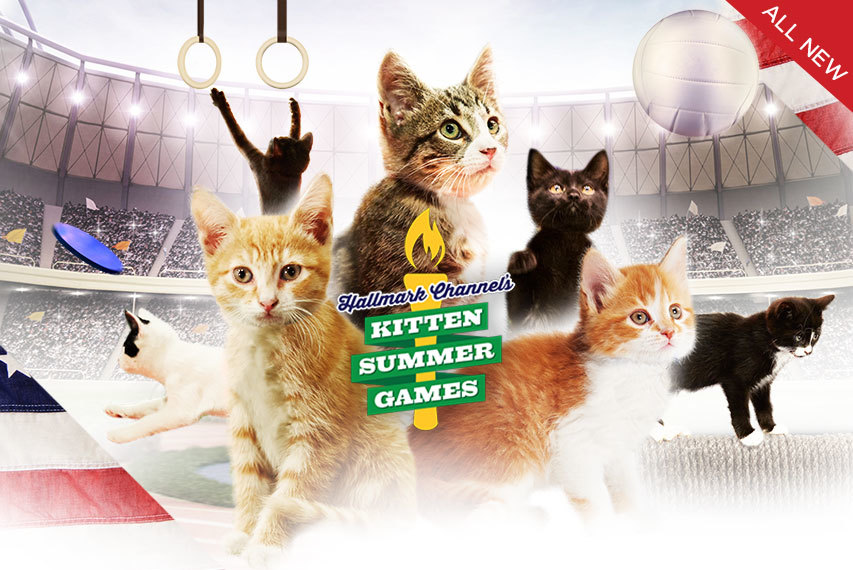 Kittens from the Los Angeles County Animal Care Center will compete in a series of fun events, such as kitten gymnastics, volleyball, tennis and even wrestling. The event will also feature about 50 other animal shelters to help raise awareness for pet adoption.

The Olympics isn’t the only event that rescue organizations use to promote animal adoption. During the Super Bowl, the Animal Channel airs the Puppy Bowl which features puppies looking to be adopted.

The Kitten Summer Games will be aired on August 5 on the Hallmark Channel. Check out some of the kittens who will be participating: 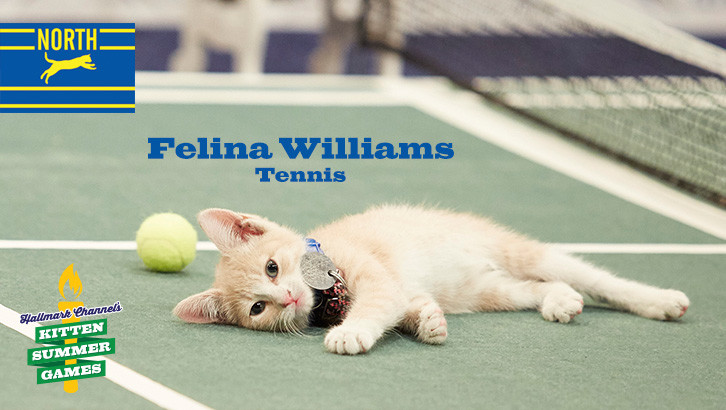 “Not only does the mega-talented Felina never double fault; she doesn’t believe anything is ever her fault. Her drop shot regularly ruffles the fur of opponents, particularly when it finds Williams dropping off of a counter onto their head. In her spare time, she likes to collect and attack shoelaces.”(Hallmark Channel) 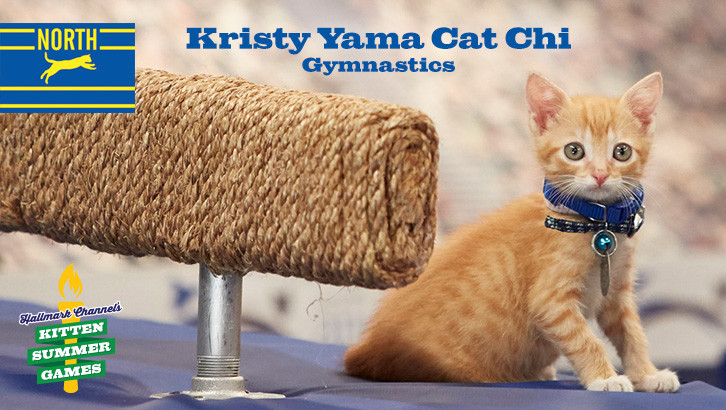 “Yama Cat Chi and her teammate would swing on the strings of blinds to train for Kitten Summer Games. She also slimmed down to a svelte 2.8 pounds since giving up tuna and mice this spring. Ruffling fur is what this kitten lives for – that, and of course spinning a good yarn.” (Hallmark Channel) 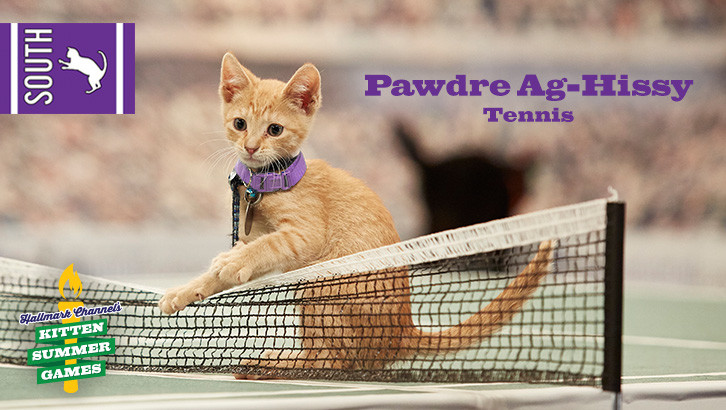 “Ag-Hissy is known for having the best swerve on the kitten tennis circuit as well as a killer backpaw and forepaw. Pawdre loves to rally, though he sometimes will spontaneously stop in the middle to assault the ball. He’s well respected for his belief that actions speak louder than meows.” (Hallmark Channel) 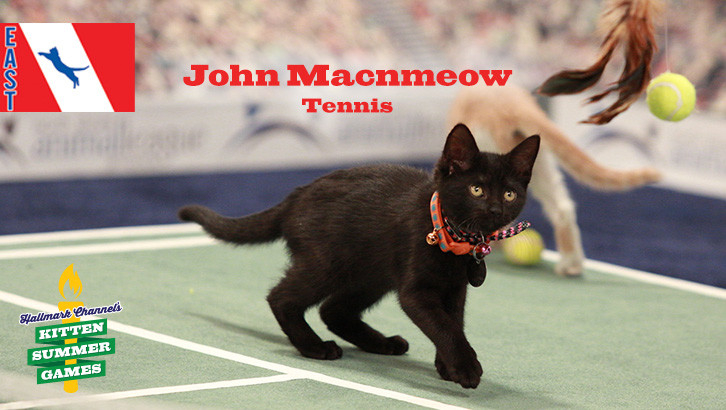 “More than perhaps any other animal at these Kitten Summer Games, MacNMeow tends to get hot under the collar and sometimes tosses a hissy-fit on the court. His Paw says John has been this way as far back as he can remember, which is about 10 minutes ago. He’s very much his own cat.” (Hallmark Channel) 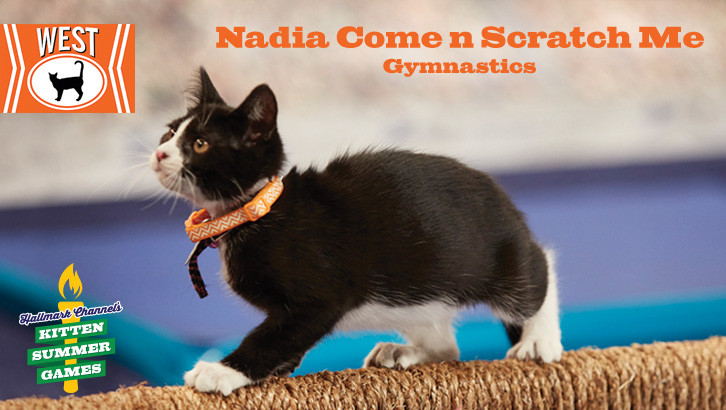 “Nadia’s remarkable story began when she was found alone balancing on the rails of an abandoned hardware store. Once famed gymnastics coach Bela Cat- Rollie heard Nadia’s incredible story, he immediately took Nadia under his paw. Nadia has been training all 12-weeks of her life and her training routine involves repeatedly running at maximum speed through a house chasing imaginary invaders, stopping…then doing it all again. She also employs a team of handlers whose entire job is to scratch behind her ears. Nadia clawed her way from balancing alone in a hardware store to competing for gold in the upcoming Kitten Summer Games.” (Hallmark Channel) 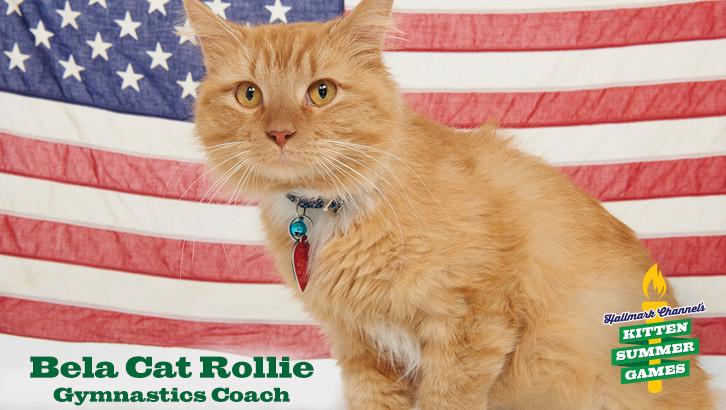 “At his training retreat in the woods of East Moncata, the Hungarian Bela Cat-Rollie, now 12, exhorts young gymkits to “stick the hissmount,” “spring with passion” and “kick some tail,” giving a tongue-lashing to any who fail to listen. But those that know Bela insist his meow is cuter than his bite.” (Hallmark Channel)

Learn more about the other kittens on the Hallmark Channel website. And be sure to tune in on Friday, August 5th at 8/7c