This Sergeant Did Everything He Could To Make Sure His Furry Companion Made It State Side!

In environments such as war-torn Afghanistan, stray cats like Kashka were seen as rat exterminators, instead of the friendly creatures they are meant to be. It was all thanks to one sergeant that Kashka was given the chance to have a forever home.

Sgt. Jesse Knott has served in the military for eight years. And during that time he had seen some unimaginable things. To bring a little bit of light into his life on his military base, Sgt. Knott decided to take Kashka into his office and create a home for the cat, despite not actually being allowed to keep a pet. And it was a good thing that he did! Kashka was able to provide Knott some much needed comfort when he was faced with the devastating news that two of his friends had been killed when a suicide bomber had targeted their convoy. Kashka, sensing his human companion’s sadness, curled up with Knott and comforted him as he grieved. 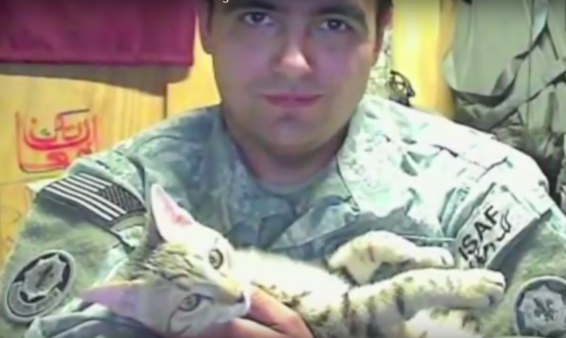 Wanting to return the favor, Knott decided the best way to do so was to get Kashka out of Afghanistan and to the safety of Knott’s own home in America. Unable to get Kashka out through military means, Knott was left with little options. It wasn’t until a local interpreter made the very brave decision to help, that Kashka found his way out of his own dark place. The interpreter decided to take Kashka and personally bring him to Kabul. It was with great risk that this interpreter traveled with Kashka, and after weeks of anticipation, Knott received word that they had made it safely to Kabul.

Once in Kabul, it was up to Knott’s parents to bring Kashka home. Three thousand dollars and a couple of flights later, Kashka made it safely to Knott’s home in Portland. To Knott and his family, the money didn’t mean anything. The only thing that was important was giving Kashka a safe forever home.