“Use the anesthetic,” a man’s voice could be heard over a surreptitious recording device. “Then just cut the neck…peel its skin.”

Karl Ammann was listening to the man they call the Tiger Butcher, Nikhom Keovised. The 70-year-old Swiss counter-trafficking conservationist has been tracking down poachers and illegal wildlife dealers for decades.

Deep in the jungle of Tha Bak, Laos, he had found one of the biggest trafficking fronts in the world, no doubt partly responsible for bringing the wild tiger population down from 100,000 to fewer than 4,000 in the last 100 years, the Washington Post reports.

The government of Laos promised to rid its country of wildlife traffickers in 2016. But Ammann was seeing and hearing pretty damning evidence that the promise had not been kept. From this small country on the border of Vietnam, tigers have been farmed and sold into captivity, or else slaughtered for trinkets and snake oil remedies. 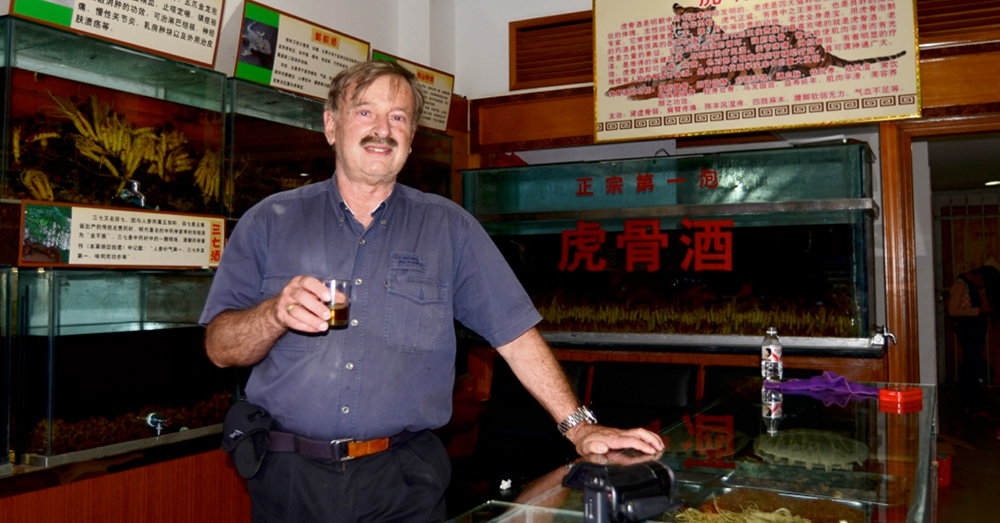 Source: Karl Ammann/
Tiger Farming: an ‘industry’ with
a range of profit centers
Karl Ammann with a glass of tiger wine, alcohol infused with tiger bones and ginseng.

Nearly all the wild tigers in Laos are now dead. Those that remain are kept in cages.

Ammann is willing to take risks for these animals because he hasn’t seen hope in the species like others have, others who consider the increase in captive tigers a benefit to the species.

“They all want hope and happy endings,” he told the Washington Post. “And I don’t see any happy endings. I can’t create fiction from what I see as fact.”

He is notoriously hard to work with, and was once even kicked out of an international conservation meeting for arguing with other environmentalists over the value of their work.

Still, he gets results. 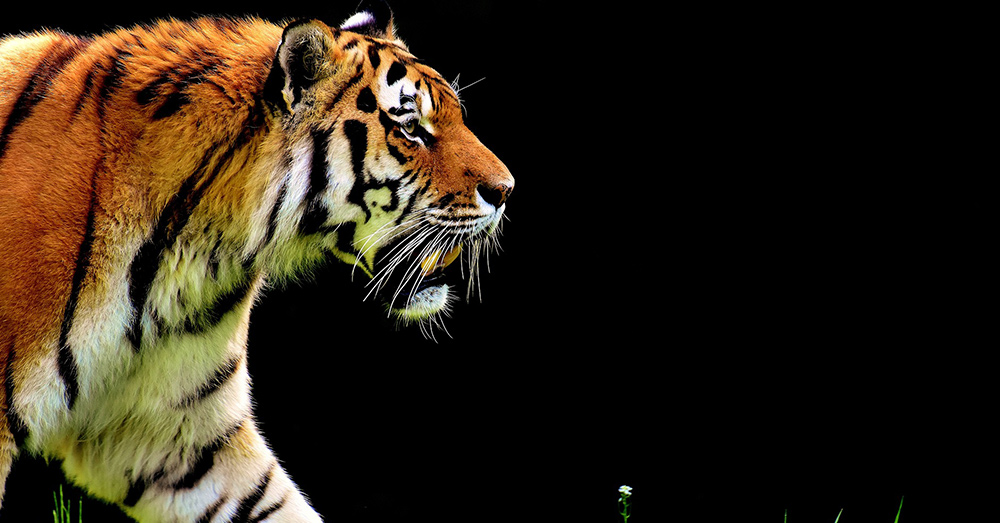 Source: Pixabay
The wild tiger population has been almost completely wiped out in Laos.

Ammann sent the WP images of sick and suffering tigers, rotting alive in clandestine cages. They are fed scraps and left to languish and die, if not sold or slaughtered first.

Using an aerial drone, Amman has captured photographic evidence of these tiger farms, and he’s exposed them to the U.N. He even pinned the blame on them for allowing these farms to continue operating. Ammann accused the Convention on International Trade in Endangered Species of Wild Fauna and Flora (CITES) of condoning the industry, and sent copies of his lengthy letters to European Parliament.

Ammann has covered his research in a number of reports and documentaries, but his work is often met with skepticism. He has seen Laotian military helicopters being used to transport tigers illegally to private casinos, a flagrant violation of CITES regulations. 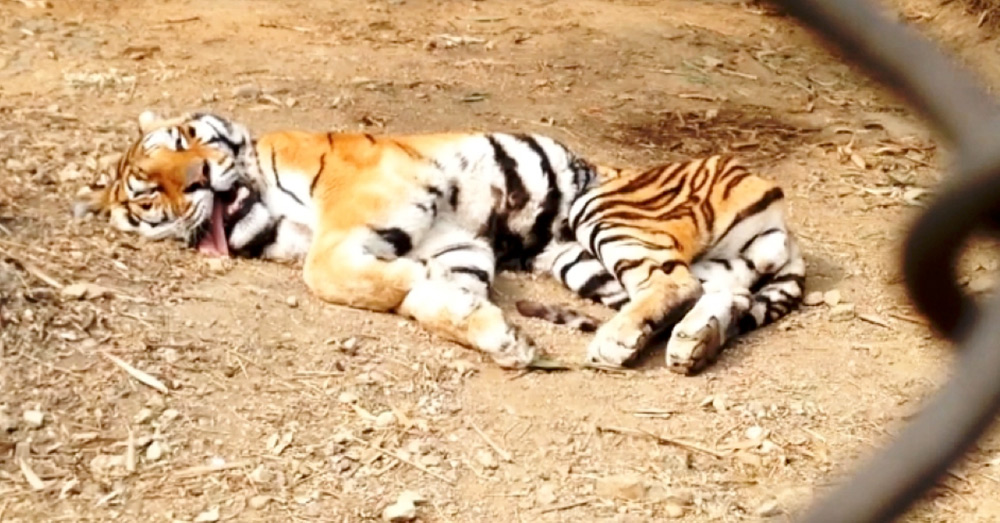 Source: Karl Ammann/Tiger Farming: an ‘industry’ with a range of profit centers
A severely dehydrated and starved tiger in Guilin tiger farm.

“I asked my local translator to ask some questions and he got confirmation that a shipment of tigers arrived at an army base about 6 months ago,” Amann wrote in a report published on his website. “I believe I have also seen some of these tigers at the Kunming Wild Animal Park where I filmed some very scared new arrivals refusing to leave their night housing.

“This was very different to the behavior of a large number of tigers in a wide range of other enclosures. Interestingly one of the former tiger keepers / trainers of this facility is now in charge of the new set up at the Kings Roman Casino in Lao PDR.”

Throughout Laos, Vietnam, and Thailand, Ammann has found many other atrocities, often masquerading as zoos.

“During an October 2013 exchange with Mr. Vixay Keosavang he mentioned that he knew the owners of the Thakhek farm very well and that he had set up his own tiger breeding operation and already had 30 tigers,” Ammann writes. “When we checked his former facility where he had been holding macaques for export we found it had closed down and ownership reverted back to the army. It had not been converted to tiger breeding as we had assumed so there is the possibility that this additional farm is located somewhere else.

“There is little doubt that there is a clear link between the owners and operators of the Tiger Kingdom set up in Thailand and the tiger farm in Thakhek. There is no doubt that there is a supply chain from this farm to what will be a large scale new breeding set up at the Special Economic Zone and the King Romans casino in Lao PDR. In the past large gambling wins at the casino meant a bear banquet had to be sponsored by the winner.” 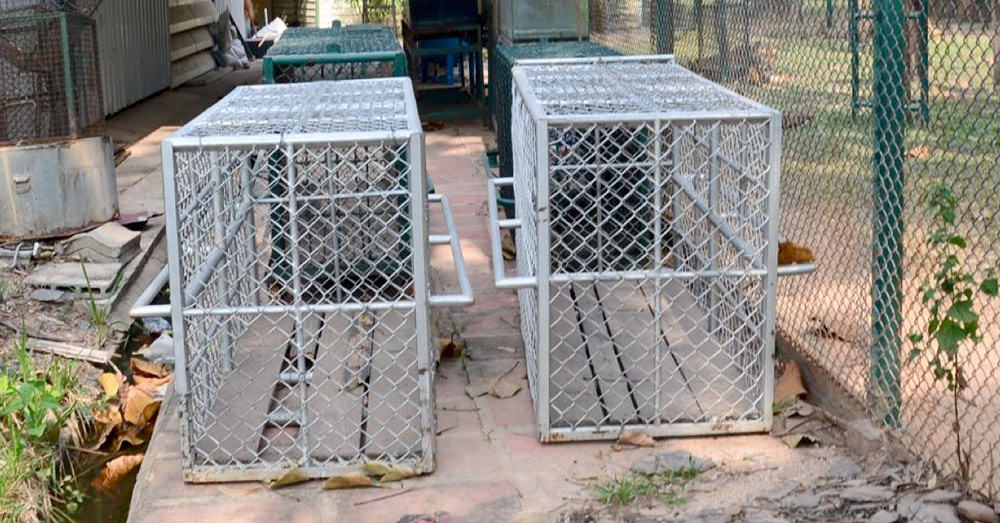 Ammann is driven by his work more than anything else in his life.

In 2007, Ammann was named a Time magazine Hero of the Environment for “almost single-handedly raising awareness of the issue of bush meat.” Meanwhile, his personal relationships were bearing the weight.

He is still married, but that relationship was wearing thin.

Back in Laos, Ammann was narrowing in on his target.

Nikhom met up an investigator Ammann had prepared with a hidden camera and an excuse. He was inquiring about four tigers for a wealthy Chinese contact.

“We are happy to sell some for you,” Nikhom told the investigator. “We use the army helicopter, or we can sell them in pieces.” 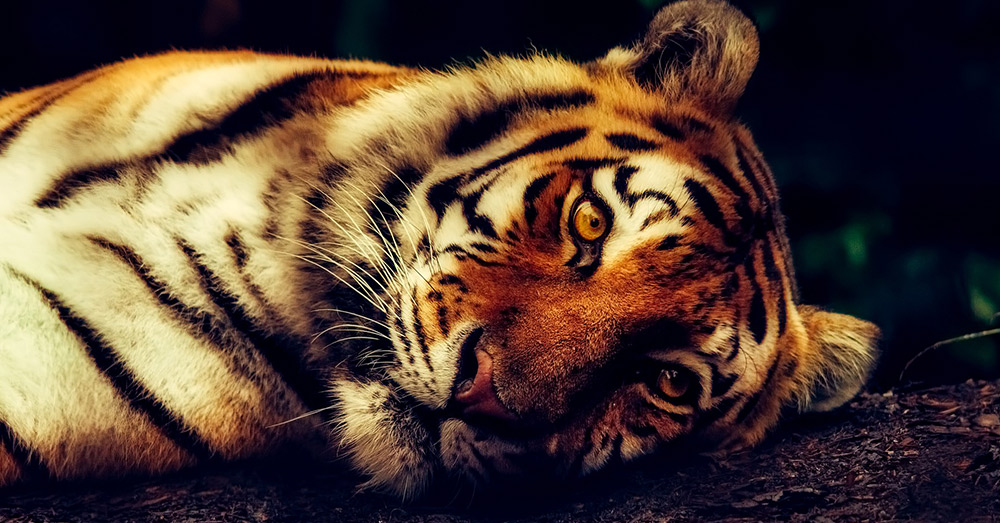 Source: Pixabay
Tigers are slaughtered or sold to the highest bidder from illegal tiger farms.

The investigator and Nikhom grew closer after months of back and forth communication. They even met for drinks and conversation.

“It always cost me,” Ammann admits. “A lot of alcohol and meals on my invoice.”

Only years later, under a new government, did Laos take stronger action in closing down its tiger farms, banning the illegal “trading tiger products to international buyers.”

The tigers became collateral damage. Where farms weren’t abandoned, they were moved across the border.

Ammann kept in touch with the investigator, who was still working with Nikhom. He learned tigers were being prepared for sale by the dozens, dead or alive, slaughtered, skinned, boiled, or frozen. 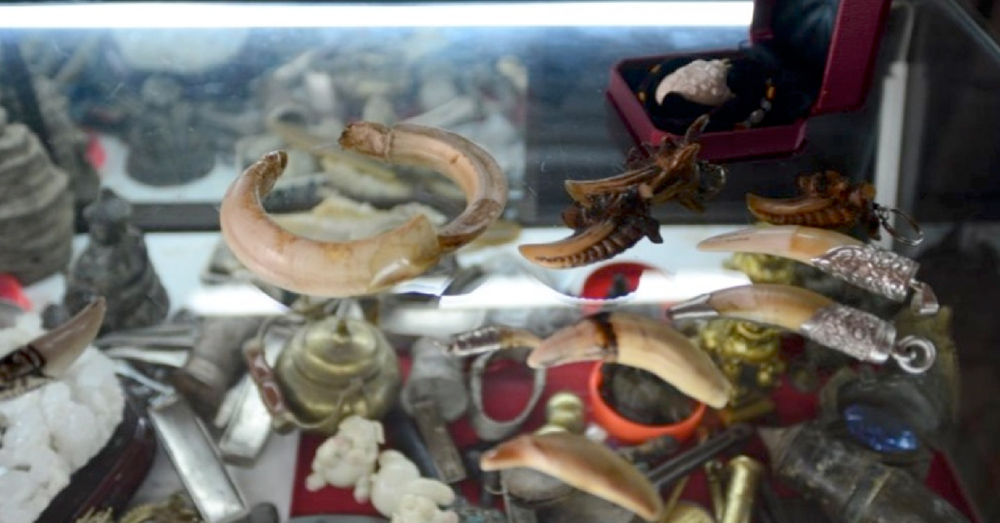 Source: Karl Ammann/ Tiger Farming: an ‘industry’ with a range of profit centers
Once a tiger is no longer earning money as a tourist attraction, its value can be added to by slaughtering it and selling the body parts.

Ammann eventually confronted Nikhom face to face, recorded their conversation in honest. Disgusted with his findings, he reported the evidence to CITES once more.

Months later, he was berating an agent from CITES in an otherwise empty meeting room.

“We know there are two more tiger farms,” Ammann said. “Two new tiger farms! You said you’re closing them down? How can your minister say you’re going to close, if now new ones open up?”

The agent refused to acknowledge Ammann’s work, no matter the proof he could offer. The answer remained the same after all these years: Not our fight. Not our job.

“This is our system,” the agent said. 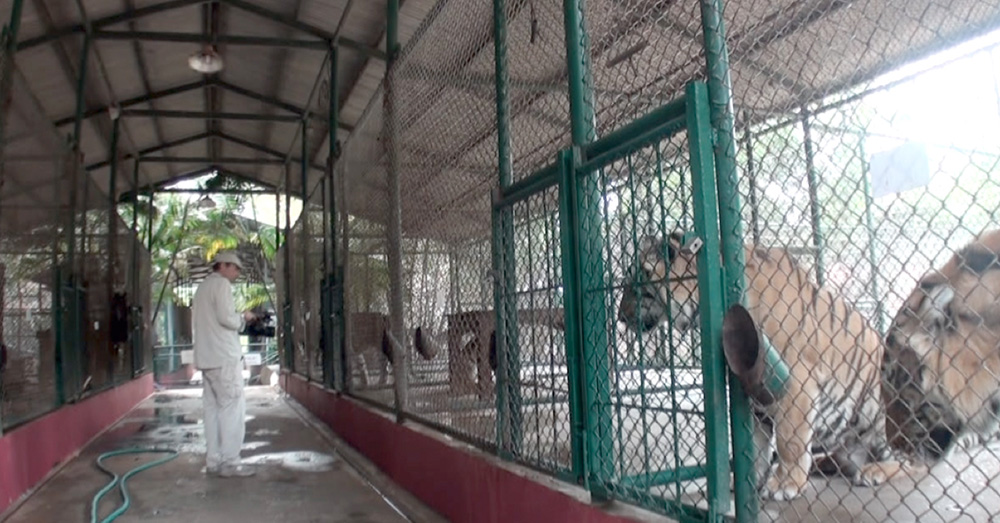 Source: Karl Ammann/ Tiger Farming: an ‘industry’ with a range of profit centers
The tiger holding facilities at Ubon Ratchathani.

Ammann published his response on January 7, detailing the horrific breeding practices he witnessed in Laos, tigers being taken away from their mothers immediately after birth, so the adults could become pregnant again, their eventual slaughter and sale, and the duplicity of government and international oversight.

“Nothing has really changed or is changing,” he wrote.

Still, Ammann continues the fight for tigers. Learn more about his work in the video below.