The Kākāpō is a chubby looking green parrot that waddles like a duck, and it’s evidence of the impact of conservation.

Also known as “Mighty moss chicken,” the world’s heaviest and longest-living parrot cannot fly, and only comes out at night. Its name means “night parrot” in Māori. It is also critically endangered, but its numbers are on the rise.

According to the Guardian, just 50 kākāpō remained alive during the 1990s. Today, more than four times as many are growing stronger on Aotearoa. It’s this success that has earned the Kākāpō the title of New Zealand’s bird of the year for the second time in the competition’s 15-year history.

Congrats to the world’s thiccest parrot, the Kākāpō, for taking out this year’s NZ #BirdOfTheYear2020!!! pic.twitter.com/AsWYBxvJty

According to USA Today, the competition was held by Forest & Bird, a conservation organization based in New Zealand. This year, 55,583 votes were cast for bird of the year, with the Kākāpō clinching the popular vote.

Also rans in the competition included:

The Kereru took the title in 2018, running on a campaign of getting drunk and falling out of trees, the BBC reports.

This is #NewZealand’s endemic and magnificent pigeon, the #kererū. Making a comeback as we get introduced pests under control, plant natives and restore habitats. Sound on to hear the characteristic wingbeats. @AlbanyBiology @GoPro. #birds pic.twitter.com/c1DYeBANKA

The kākāpō once flourished on all of New Zealand’s islands, but in the last few centuries has been mostly extirpated by invasive predators.

“The things that make Kākāpō unique also make them vulnerable to threats. They are slow breeders, they nest on the ground and their main defense is to imitate a shrub,” Laura Keown, spokesperson for the competition, told the Guardian. “Those qualities worked great in the island of birds the kākāpō evolved in but they don’t fool introduced predators like stoats, rats and cats.”

We of team kākā would like to fully congratulate the kākāpõ for their #BirdOfTheYear2020 win. It was a democratic election and we are glad all votes were counted. It is right to concede. May you do justice to this high office, for all birds and planet. pic.twitter.com/MgN4xCk8FA

Kākāpō have about a 60-year life expectancy.

The most famous Kākāpō in New Zealand, and by default the world, is a bird named “Sirocco.” Sirocco’s most notable claim to fame may be the time he tried to mate with zoologist Mark Carwardine’s head as actor Stephen Fry looked on and took photographs for the BBC documentary “Last Chance to See”

“He’s really going for it!” Fry said during the incident.

Characteristic of a year many would rather forget, the bird of the year contest was tainted by actual voter fraud.

“Volunteer scrutineers found 1,500 votes cast one night were from the same IP address, all for the smallest kiwi species, the kiwi pukupuku or little spotted kiwi,” the Guardian reports. 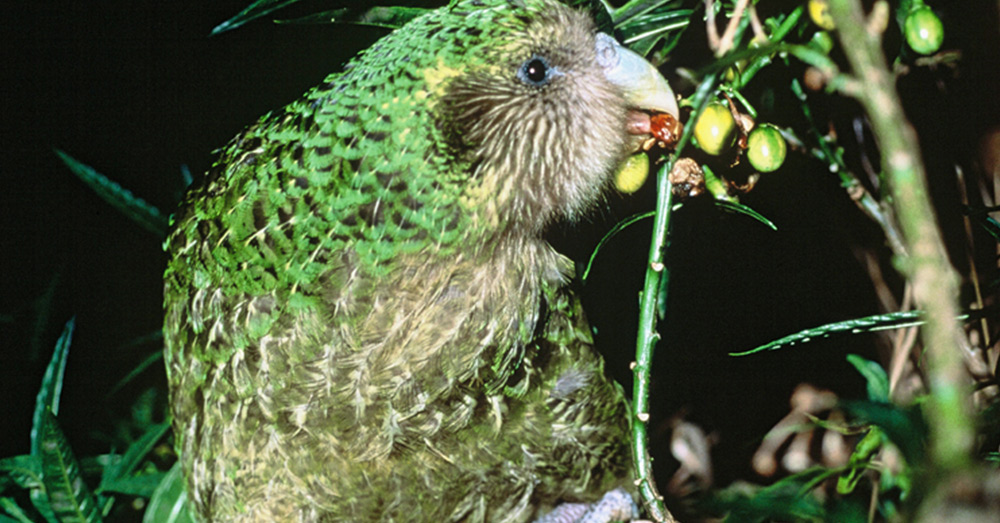 Source: Wikimedia Commons
The Kākāpō is New Zealand’s 2020 bird of the year.

Winning by an unscathed margin of legal votes, there was little doubt the Kākāpō was the 2020 bird of the year. Even as the Hihi and Kereru tweeted loudly in the days following the contest’s conclusion, the judges were not swayed and no recount was necessary.