A three-year-old K-9 officer named Arlo was just released from a veterinary hospital in Oregon after undergoing multiple surgeries to repair damage done by two bullets he took during a police chase.

Thurston County Sheriff’s Office (TCSO) announced in a news release that K-9 Arlo was shot twice by a 25-year-old suspect after a high-speed chase on I-5 south in Washington state. “A TCSO K-9 was struck by gunfire and has serious but survivable injuries. The suspect, a 25-year-old man was also struck by gunfire and was transported to the hospital in serious condition,” wrote TCSO.

Arlo was rushed to Newaukum Valley Veterinary Services where he was treated for a bullet wound that went clean through his leg. The other bullet grazed his spine and shoulder before landing near his neck. He was referred to Oregon State University Veterinary School of Medicine to remove the other bullet and hopefully repair the damage.

“Currently the extent of Arlo’s known injuries are, a fractured vertebrae and a fractured scapula, resulting from the incident last night. We have confidence that through the skilled hands and knowledge of Arlo’s care team that he is getting the best care possible,” posted the department.

A team of some of the top veterinary neurosurgeons in the country examined and then performed multiple surgeries to save Arlo. “It’s a miracle that Arlo’s still alive,” Dr. Jen Warnock, one of the veterinary surgeons who worked on Arlo, told Today, Oregon State University’s news site. “The C6 vertebra was shattered; the bullet missed an artery that would’ve killed him by a millimeter; it could’ve destroyed his carotid artery.”

The team fused his C6 and C7 vertebrae with six screws and watched him closely over the weekend. He is on the road to recovery but still limps due to his shoulder injury.

“The shoulder that had all the bullet damage is the weakest,” Warnock said. “He’s still weak, but he’s improving by leaps and bounds.” 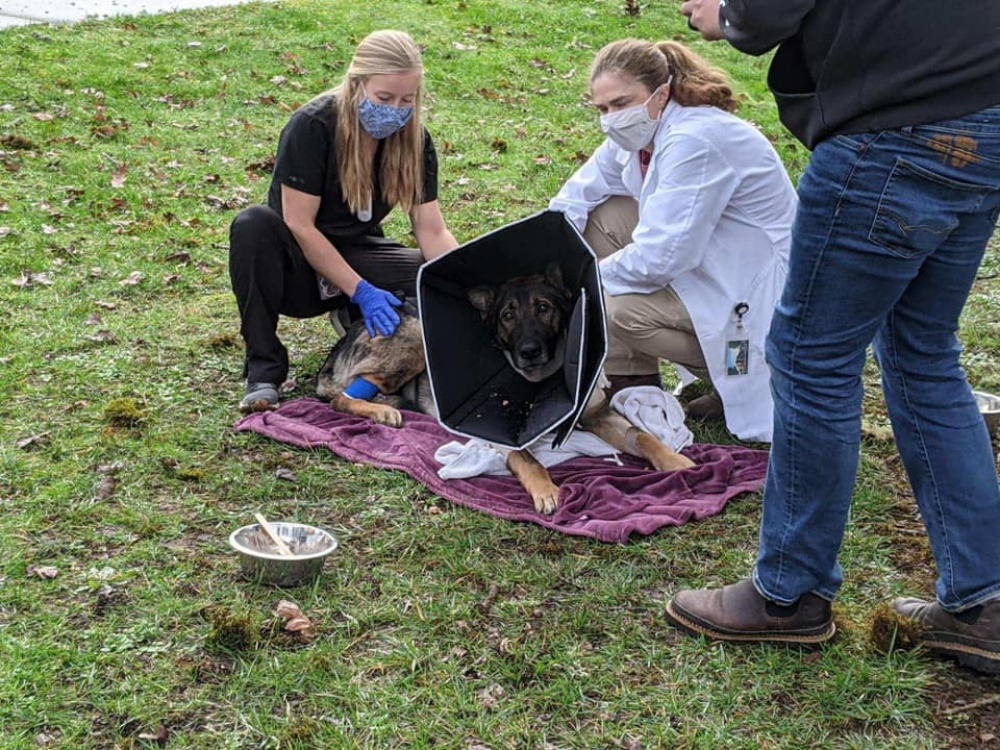 On Monday, he was released to his handler, Dep. Tyler Turpin, and received a police escort all the way home. Officers lined up outside the facility to show their support for the brave pup and then turned on their lights for a true hero’s welcome home.

K-9 Arlo has a huge following on TikTok with over 1.6 million followers who sent him well wishes and anxiously waited for updates. They were relieved to hear he is on the mend. His homecoming video was posted on TikTok which immediately went viral with 46 million views.

“Such a warrior,” is how Dep. Turpin described his loyal partner. He posted a heartfelt thank you to everyone who has helped Arlo, “It’s only been a few days but this journey seems like it’s been months. We still have a long road to go and it’s a daily struggle for all of us. But we have the winning mindset and will fight everyday to comeback.

“Arlo is so happy to be home with his family. His personality is back and wants to go play but he also knows he needs rest.

“Thank you everyone for the love and prayers. We felt it since day 1 and it alone helped us continue to fight! #arlostrong.”

Arlo will likely suffer from arthritis due to his wounds, so he has been retired from active duty. However, he will continue to entertain his fans on TikTok.

Grab a tissue and watch the heartwarming homecoming in the video below.