This Poor Pup Was So Frightened Of The World Around Her That She Refused To Leave Her Safety Net!

This poor puppy was so frightened that she curled herself into a tight ball and tried to blend in with the wall! Lab mix, June Cash, was abandoned at a North Carolina animal shelter, along with two other pups. According to Inside Edition, Cash was so frightened of those around her that she pressed herself against a wall and hid in the corner of her kennel. She had only been at the shelter for 18 hours, when a volunteer noticed that something was really wrong.

Since her arrival at the shelter, Cash had not moved from her hiding spot even once. She refused to move for anything. She hadn’t touched any of the food given to her, and didn’t even budge when she needed to relieve herself. This led to her, unfortunately, soiling herself. Not wanting this to continue the volunteer, Tammy Graves, called in a friend to help. Together, they were able to lure June Cash from her little corner and coax her into eating. They took her to a vet and learned that, not only was she badly abused by her original owners, she was also very sick. June Cash had all sorts of parasites riddling her body. 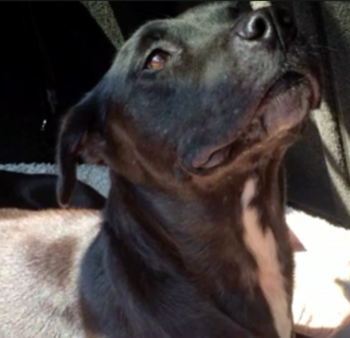 June Cash has a very long road of recovery waiting for her. Her body needs to heal, as well as her spirit. She is so shy and skittish that it will take a lot of work, but will definitely be worth it in the end. Since her arrival at the shelter, June Cash has begun to show some progress by showing affection to those few that she trusts!