This Pup Was Returned To A Shelter Because Her Owner Claimed She Was Too Clingy!

Jubilee is an affectionate pup that suffers from an anxiety disorder. These qualities that make her endearing to others are the exact the reasons that her owner returned her to the shelter that she was originally adopted from.

Jubilee’s prior owner brought Jubilee back to the Montgomery County Shelter in Texas and claimed that the pup was just too clingy. Apparently Jubilee always wanted to be by her owner’s side, but that wasn’t the only reason. Her previous owner also claimed that Jubilee had a bit of a destructive streak. Jubilee had destroyed part of his couch, a cushion, and some baseboard. It is believed that she was destructive because she was suffering from anxiety. And while these reasons aren’t the ones that would make most return a pup to a shelter, Jubilee’s previous owner did, in the end, do the right thing. Instead of resenting or neglecting Jubilee, her prior owner acknowledged the fact that he couldn’t care for her in the way she needed, so he brought her back to the shelter so that Jubilee could find the home that was meant for her. 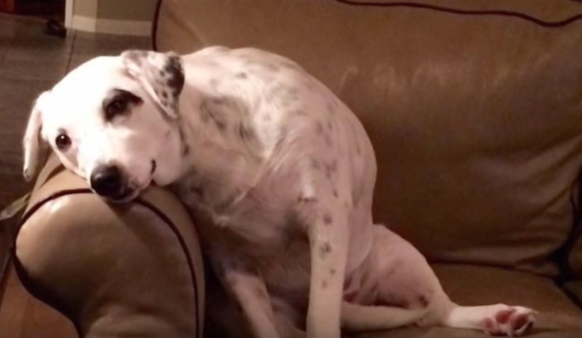 Jubilee’s story spread like wildfire. It was shared so many times and seen by so many people that it wasn’t long before people were reacting. Many were appalled by her previous owner’s actions and many more flocked to the Montgomery County Shelter in order to give Jubilee a loving home. Jubilee was only in the shelter for a day before a lucky family won out. Jubilee’s new family was able to provide her with a loving home where she has a new sibling named Abby to help ease some of her anxiety. On top of giving Jubilee a new home and a furry sister, Jubilee’s new owners provided Jubilee with a trainer meant to help lessen and work through her anxiety issues.

While Jubilee’s previous owner obviously didn’t deserve her, he ultimately made a good call by returning her to the shelter. Because of his actions, Jubilee was able to find a new home with a family that loved her unconditionally and would do anything to help this affectionate pup.
Share on Facebook
Share on Facebook