She Walks Two Dogs Up To Him. When They Realized Who He Was, She Could Barely Hold Them Back!

An Air Force veteran, named Joshua, unfortunately had to be without his two dogs for two months. He had to leave them in Louisiana when he moved to California and asked Tia and Mariah of Pit Bulls and Parolees to help get them across the country. Mariah met him at a local park with his two pups so he could reunite with them for the first time. 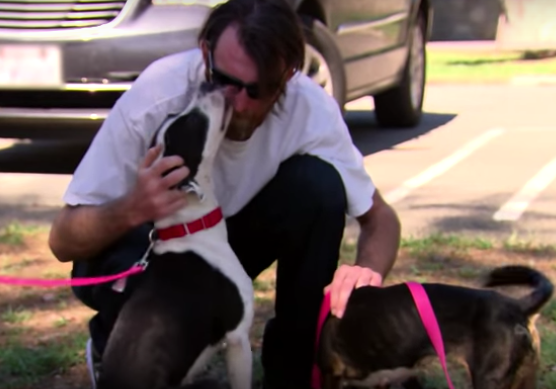 The second he pulled up and got out of his car, the dogs’ tails began wagging and they started walking toward him. People are always afraid that their dogs won’t recognize them, but these pups recognized their owner immediately. Joshua bent down to hug them and they jumped up on him and licked him all over. They were so happy to be with their dad again! These two pups are his best friends and they are the only ones who have been there for him since getting back from Afghanistan.