Surrendered as skin and bones, Joannie needed food for her body and her soul

Joannie, a Great Pyrenees, and her sister came to Saving Pyrs in Need when they were surrendered by their owner. Although almost two years old and in good health, Joannie and her sister were as different as night and day.

Joannie only weighed 65 pounds, just skin wrapped around bones. The vet said she had a hole in her diaphragm, her right lung was collapsed, and her small intestines were inside her chest cavity. Because of this, Joannie had been slowly starving for at least four months and she could not eat. 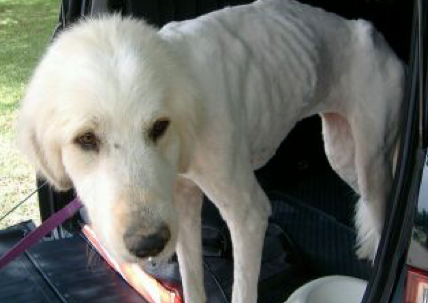 The vet has never been faced with a surgery like this before but agreed to operate in an attempt to save Joannie’s life. The surgery was a success! Within a week she gained 4 pounds. As Joannie continued to recuperate, Saving Pyrs would post her progress so people could watch her amazing transformation.

One of those watching was Tracy. Tracy lived in Seattle and totally fell in love with Joannie. Tracy even flew to Texas to meet her. Once there, she knew that Joannie had to become a part of their family. She rented a car and drove her the over 2,300 back to Washington, to her forever home. 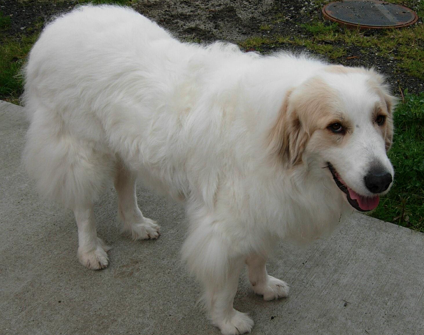 When Joannie was adopted she weighed 105 pounds and today weighs 115, almost double what she was when she came to Saving Pyrs in Need. Now Joannie is the love of Tracy’s life. She even goes to work with her everyday and her four-legged brother Tito. If it wasn’t for Saving Pyrs in Need I’d hate to think that Joannie would not be here today.