After Being Injured By Poachers, This Baby Rhino Made A Unique Friend When Rescuers Saved Her!

This baby rhino is a brave little (big?) thing! She was seriously hurt when she attempted to save her mama from poachers. Her injuries were the result of being stabbed multiple times by the poachers. Wanting her to heal, rescuers took her to a rhino orphanage where they treated her stab wounds and gave her a name. Rescuers named this brave rhino J’aime, which when translated means ‘I love you’ in French. It is definitely a fitting name for a creature that risked herself in an attempt to save her mama. 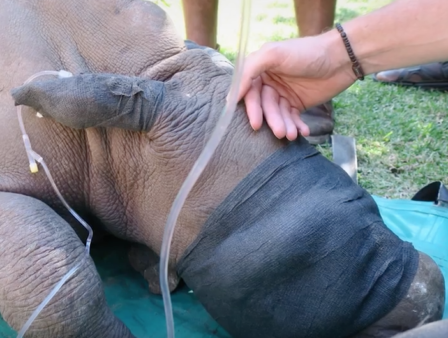 At the rhino orphanage J’aime is not only given the time to heal, but she is also given the time to learn and grow. So far she has learned the very important skill of rolling around in the mud and blowing bubbles in water! Unfortunately, J’aime was still too small to be learning all of these valuable life skills with the other rhinos. Instead, J’aime is learning with her new best friend… a goat. While an unlikely pairing, J’aime and her goat best friend make the perfect team. The duo learns together, grows together, and plays together. And while her goat isn’t the only friend that J’aime has made since she began to stay at the rhino orphanage, she is certainly the one that turns the most heads. It’s absolutely amazing to watch them interact with each other. 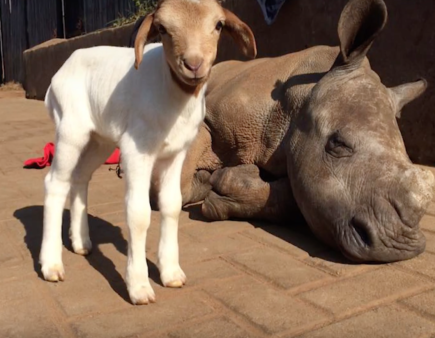 As J’aime heals and grows, her rescuers know that she will eventually want to return to the wild and they will let her. When she feels ready, J’aime will venture off on her own and live a life full freedom to roam the wild like she was always meant to.
Share on Facebook
Share on Facebook