It doesn’t matter if you are obsessed with animals or not, you probably realize that they each have their own personality. It doesn’t matter what species or specific animal you are discussing, something is going to come out from inside of them that makes you realize they are an individual. We tend to break it down by species, such as dogs being silly and lovable and cats being aloof, but the fact that each animal is an individual is seen very clearly in the case of this Jack Russell Terrier.

The Jack Russell in this story is named Callie, and like many other dogs in his breed, he had a lot of energy. He also just happens to love chasing squirrels, which is fairly stereotypical of the breed as well. It went beyond just enjoying chasing squirrels, Callie would lose her mind, anytime there was one in the area.

It seems as if the obsession that Callie had for squirrels was so strong that even mentioning the word squirrel would send her to the moon. When you see it in action for yourself, you realize just how amazingly adorable it really is.

Jack Russell Terriers, in general, are known for the energy that they have at their disposal. They were bred to chase vermin and help farmers to keep barns and other outbuildings clear of those pests. Callie wasn’t born to work on a farm, but she still loves chasing squirrels when she has the opportunity to do so. 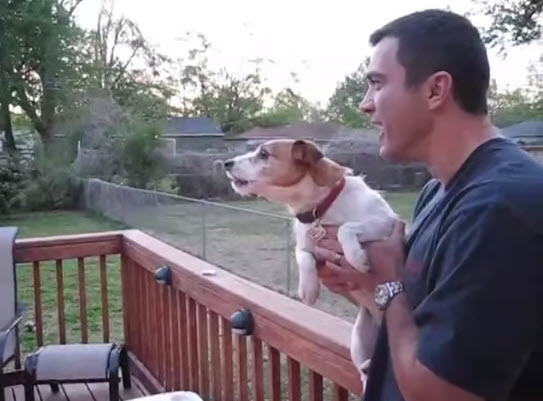 In the video below, Callie’s owner is holding on to her and he is taunting her weakness, asking her if she sees the squirrels. Callie then starts staring off into the distance, checking to see if he is telling the truth this time. She then gets frustrated, barking until she is released so that she can start chasing the squirrels, as she was born to do.

You can see it for yourself in the following video: