Hurricane Irma has left many Floridians in dire need of help. In the wake of the storm, those neighborhoods that haven’t been left underwater are left without power.

But in Gainesville, a man investigating the power substation near his house found more than electrical issues. While approaching on his bicycle, Chad Mitchell heard a faint squeak, Love Meow reports. After he checked his bike, however, it was clear the squeak was coming from somewhere else nearby.

There in the grass was a wet, weak, and nearly lifeless kitten, around six weeks old, holding onto what little energy it had left. 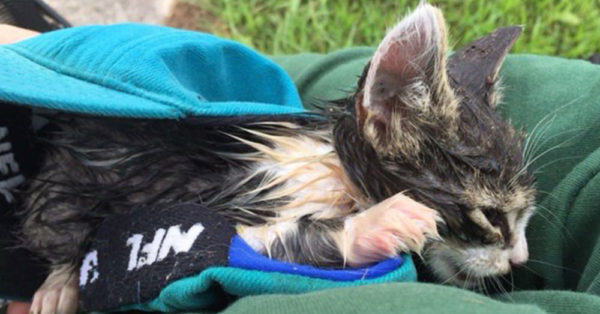 “He saw the kitten and at first thought he was dead,” Carre Mitchell, Chad’s wife, told Love Meow. “Then he realized that the noise was coming from him.”

Chad put the kitten in his baseball cap and carried it home on his bike, trying hard to keep it warm. 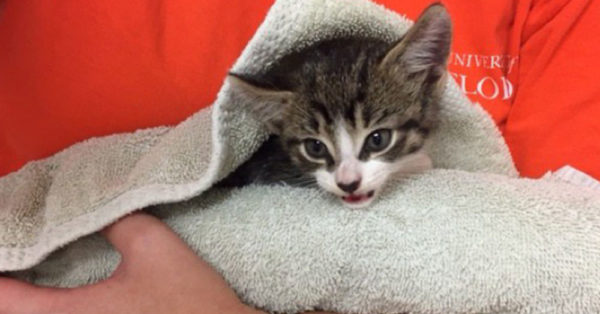 “Our house was boarded up against potential debris, so it was dark as pitch,” Carre said. “I grabbed my flashlight and headed out to the hallway where he had this little lifeless kitten in his hat still.”

As Carre dried the kitten off, Chad attempted to revive the tiny animal, motionless at this point. They warmed his body with towels and used every other method of resuscitation they knew.

After a tense 2 hours, the kitten started to move around. 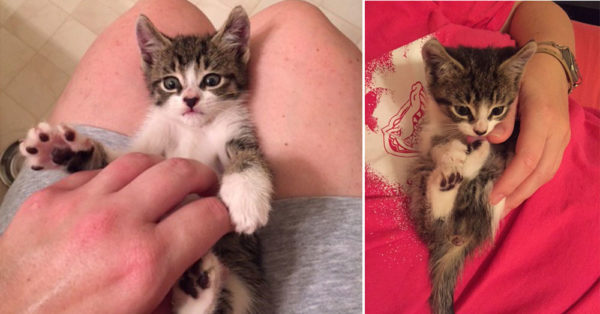 “He started to show more signs of life, perking up and meowing occasionally,” Carre said. “He was about the size of a four-week-old kitten, but all of his teeth and his eyes had already changed colors.”

The couple fed the 1-pound animal a soft mixture of canned food and water and took him to the veterinarian, where they found he was suffering from hypothermia. The little kitten is going to survive and now has a new forever home, as well as a name.

“We named him Cantore because the eye of the hurricane came over Gainesville, and every Floridian knows that Jim Cantore is always right where the action of any storm is!” Carre said. 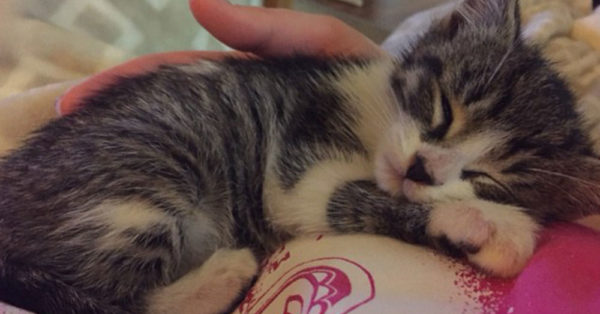 Thanks to quick thinking in a disaster, Cantore is thriving. Perhaps the silver lining to the clouds left over Chad and Carre’s Gainesville home.

“He was severely hypothermic, very malnourished, but with a heck of a will to live,” Carre said. “Amazing what being warm, dry and getting some good grub can do for a kitten!”

Out of all of the rescue stories we’ve seen recently, Cantore will surely be remembered. Across the Atlantic, another cat has been memorialized in the corner of the UK he liked to frequent most, a supermarket. Click the button below to read more.