Some friends are so close they become like a surrogate family, supporting you during life’s many ups and downs. As it turns out, this dynamic exists in the animal world, too.

One day animal rescue worker Joellen Anderson received a call at the Peepal Farm, a non-profit organization in Himachal Pradesh, India that aims to help abused, abandoned, injured, and unwanted animals. The frantic call from a helpful stranger painted a sad portrait of a sick monkey that desperately needed help. 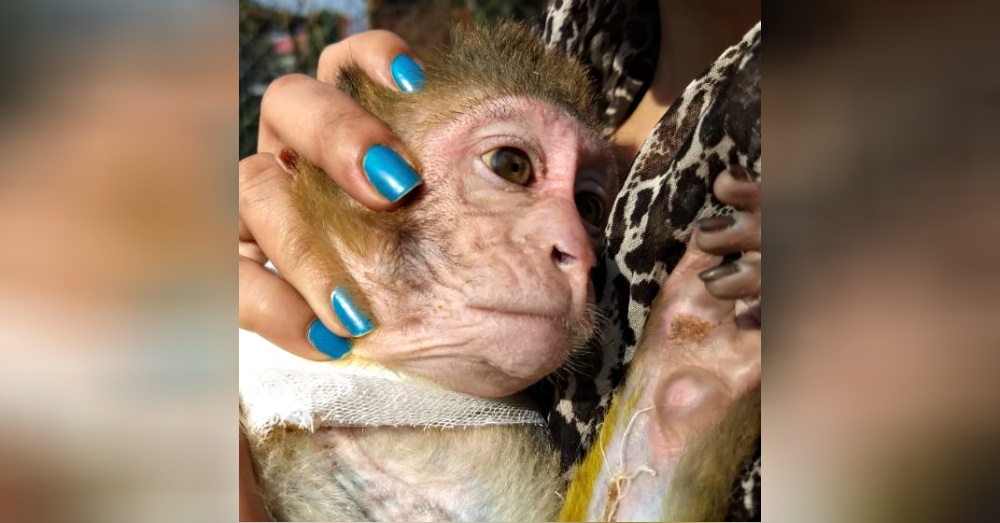 “There’s a monkey in Dharmsala with its arm ripped off,” said the alarmed voice on the other end of the line. The Good Samaritan had discovered a tiny Simian monkey dangling from some power lines. The monkey had been abandoned by her family for some reason, and as the baby tried to live by itself it had stumbled onto the power lines and been electrocuted. The caller was correct — the poor monkey’s arm was so badly mangled that they had to amputate it soon after rescuing her.

Once the monkey was safe and the arm had been removed she began the long healing process, but shelter workers noticed that she seemed depressed. Monkeys are extremely tribal animals and prefer to live in troops, so this little one was in pain and also feeling sad at being separated from the only family she’d ever known. 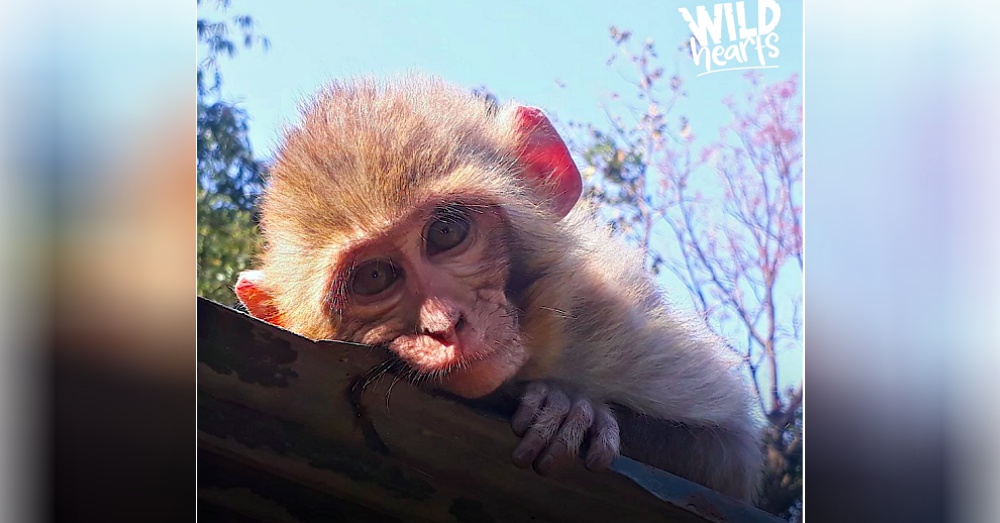 Workers named her Avni and did their best to give her a second shot at life. One day they noticed that Billo, the shelter’s resident rescue cat, had taken a shine to Avni. The gray tabby cat would come and sit next to Avni’s crate, purring and rubbing her cheeks against the bars. The monkey was also interested in the cat, so when she was well enough they opened the door and let the two interact.

The effect was instantaneous. “Billo just came right up and walked right in,” Joellen said. “They started snuggling. It was immediate. We were like, ‘O.K., this might actually be a good thing for Avni, for her recovery so that it can help her reduce her stress.’” 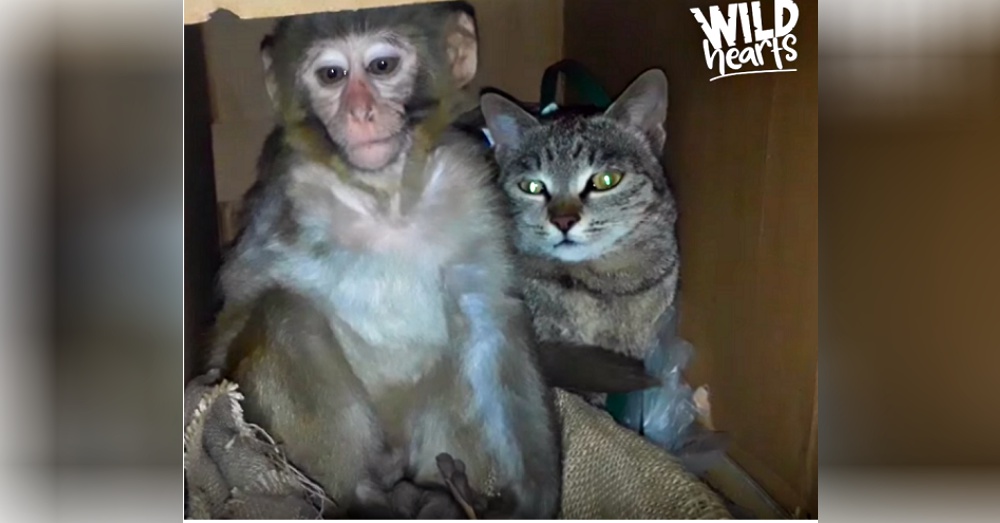 Soon Billo stepped into the shoes of surrogate mother for Avni. The pair played together, slept together, and groomed one another. Avni’s mood improved so much that she even started to heal faster. “Avni really likes to groom Billo,” said Joellen. “She just ruffles through her hair and pulls things out.” 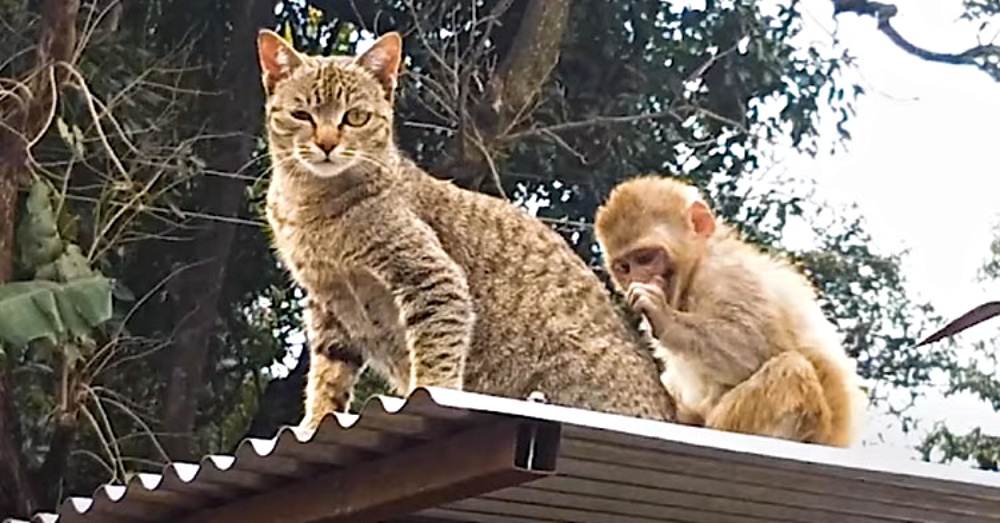 “We eventually decided to let Billo enter Avni’s crate, and we were pleasantly surprised to see how gently she snuggled right beside Avni. From then on Billo and Avni were inseparable pretty much all through their waking hours. Avni began recovering and was finally released from the crate. The one thing that we believe aided her recovery the most was Billo’s love and company.” 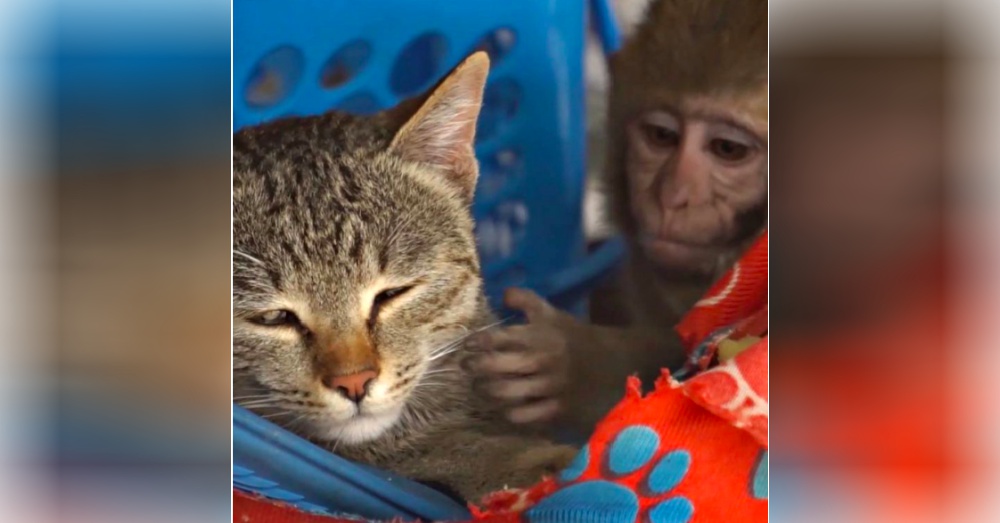 Avni has now made a complete recovery and will live out her days in the jungle area of the shelter. She now has a fondness for all of the other creatures who call Peepal Farm home, romping and playing with dogs, sheep, and every other animal she can find. Yet no matter how many other furry pals she makes, Billo will always be Avni’s favorite friend. These two are bonded for life!

Watch the video below to learn more about this adorable pair of BFFs, and be sure to share to make an animal lover smile today.

Community Rallies To Help Soldier Bring Rescued Cat Back Home From Afghanistan: Click “Next” below!