Man Builds Most Incredible “Boudoir” For His Anxiety-Prone Rescue Dog.

One glance at Sean Farrell’s Facebook page tells you everything you need to know about this British pet owner.

The fact that the page is dedicated to his two dogs Zook and Sgt. Buster is your first clue that Sean is a tried-and-true animal lover who often goes above and beyond to care for his pets. He had lavished attention on Zook for years before the dog passed away. When he volunteered to foster Buster, a Staffordshire Bull Terrier, he knew right away that Buster was meant to become a permanent member of his pack. 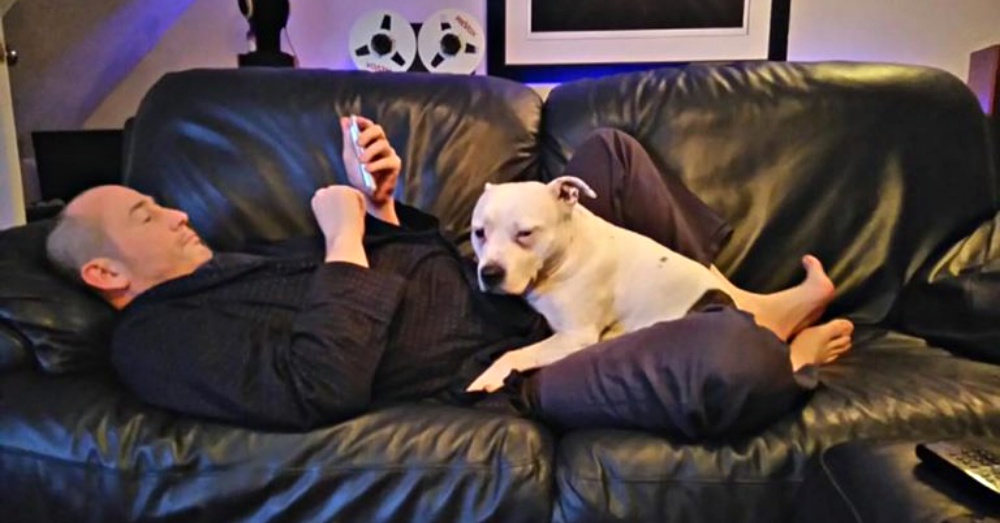 “I’ve had him just over 2 years,” Sean explained. “He’s not had the best life and that changed the day I met him. Initially, I was only supposed to foster him but I fell in love, and we [both] knew we were meant to be together.”

Like many rescue dogs Buster suffers from some anxiety and other issues from his earlier life. He doesn’t care to be around any other men aside from Sean, and he’s got a myriad of trust issues in general. Thanks to lots of love and hard work with Sean, Buster has already improved so much that he’s a therapy dog who visits hospitals and clinics to help people with autism, agoraphobia, and other issues. 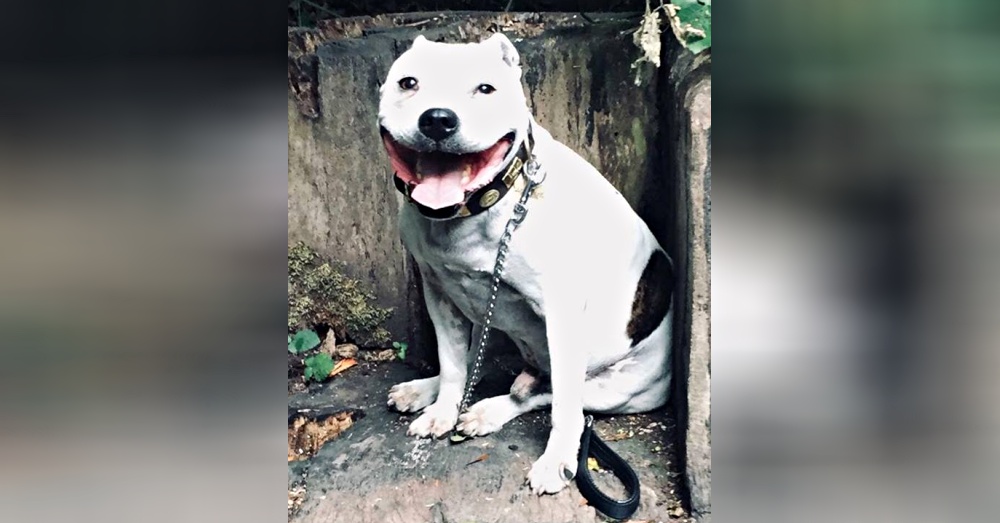 At home, Buster often sequesters himself in Sean’s bedroom and refuses to come down for anything but food. Sean wanted to find a way to give him a safe space in the family room so that the dog can be separate yet still included in the daily events.

“The boudoir was an idea to give Buster a cozy space of his own in the same room as me,” Sean said. “To really let him know he can be safe around me and feel secure in his little den at the same time. [After finishing it], he went in there almost instantly. It has been a few weeks now and he’s happy to sleep and hang out in his house.” 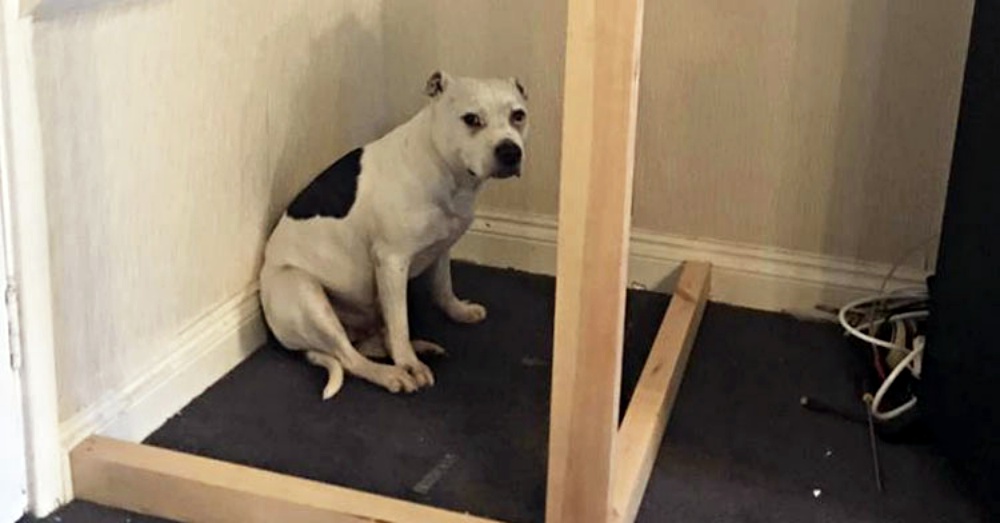 Sean admits that he has very minimal carpentry skills and only spent about $100 on building Buster’s “boudoir.” Along the way he continued to give “pup-dates” to the thousands of fans who follow his Facebook page.

“As it was in my own living room, I wanted it to blend in and look part of the room,” Sean said. “I had no real plan, I just bought some wood and ply board, and just did it as I went along due to its enormous success with over 20 million views on Facebook.” 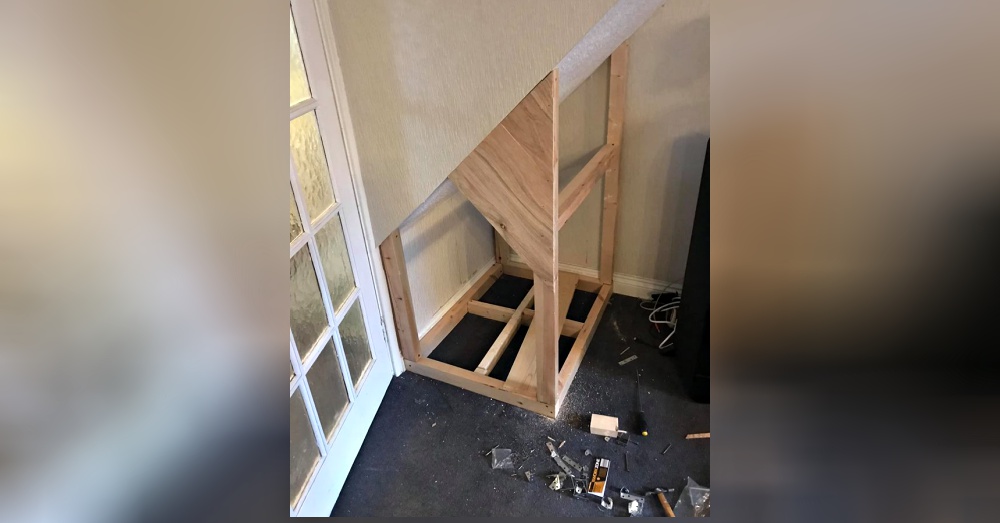 The tiny bedroom has a cooling fan and mood lighting, along with some wilder touches like Buster’s very own television. Just kidding; Sean says he’s “not mental” and that screen is actually just a digital picture frame filled with good times shared with both Buster and Zook.

“From start to finish, the boudoir took me about four days to make. After I painted it and used carpet adhesive, Buster wasn’t allowed in for another 2 weeks. I’ll never fuss or play with him when he’s in there as I want him to feel it’s his own little corner.” 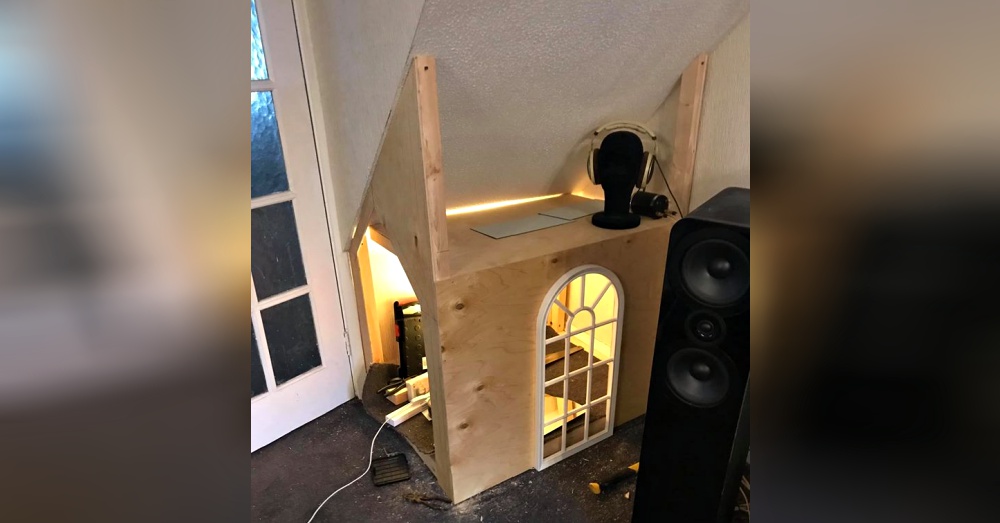 After Sean’s photos of Buster’s boudoir reached viral status he was inundated with kind messages from all over. He says he hopes the attention will alleviate some of the negative stigmas attached to Buster’s breed.

“I’m absolutely blown away by the response it had from hundreds of thousands of people from all over the world. Staffordshire Bull Terriers are getting very bad press and it’s so lovely to be able to show them that they are beautiful dogs that deserve a wonderful life.” 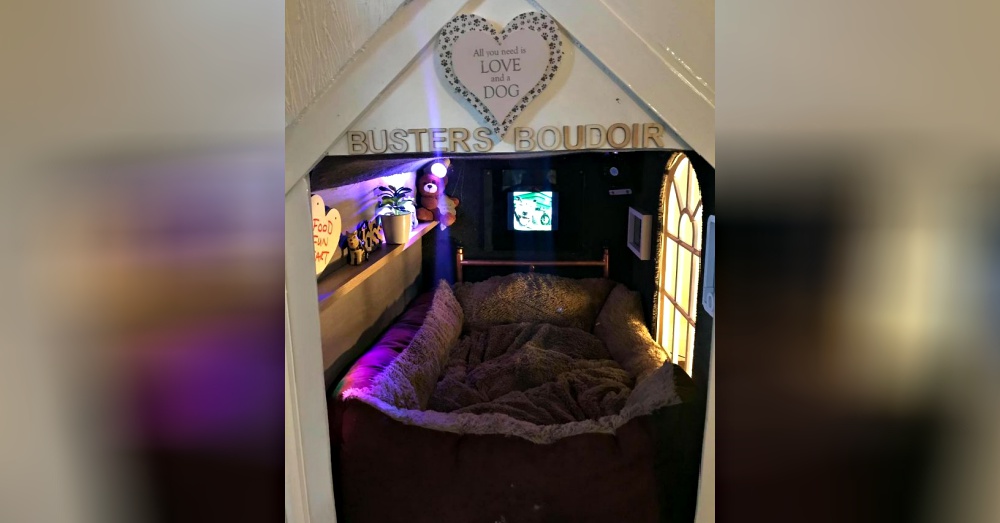 Who else wants to be one of Sean’s dogs in their next life? This is one pampered pooch who seems to know exactly how good he’s got it. Then again, so many beautiful dogs are out there waiting for their forever homes that perhaps this story will encourage more people to shower these animals with all the love they’ve been missing in their lives so far.

Share this story with a dog lover who would totally build one of these for their best friend!