Husky dogs have a lot of energy – something that serves them well in the type of frozen wilderness environments that they live in. They’re easily one of the most beautiful breeds of dogs out there, with their thick and lustrous coats, piercing blue eyes. But there is something very unique about the huskies, and that is they don’t bark like most other dogs. Instead, they tend to howl. And they’re known for being quite vocal – so much so that if you talk to them, chances are they will talk right back to you. Because they’re such unique dogs, it’s no wonder that they’re one of the most popular breeds in the US.

While some dogs don’t necessarily like to get a bath, there are others who do. And Zeus, a Siberian Husky, can’t get enough of baths. They’re his favorite past time. And when he gets told no, he will throw a temper tantrum.

And it doesn’t stop there. Zeus it seems, has made the bathtub his new hangout spot in order to be that much closer to what he hopes will turn into a bath. However, when his mother tells him to get out of the tub, Zeus decides he’s going to protest. 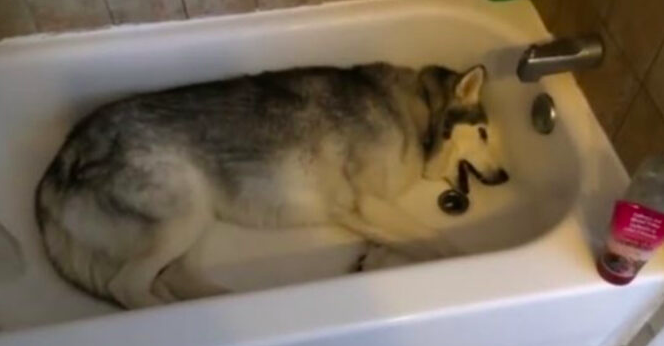 In typical Husky form, his protest takes quite a dramatic turn. He certainly lives up to the term “stubborn Husky.”

Check out his temper tantrum in the video below: