How Birds See The World Compared To Humans

Have you ever wondered what animals’ vision must be like? I used to ponder that concept often as a kid. And the science community has too, although their recent scientific research into the question “how do animals see?” has yielded some amazing results – we are now privy to a whole world of vision diversity across the animal kingdom. For example, did you know that a dragonfly’s brain works so fast that it sees movements in slow motion? Also, snakes pick up on infrared heat signals from warm objects, thus being able to detect prey. Horses and zebras both have eyes pointed sideways, which enables them to have peripheral vision and escape danger. While insects have compound eyes that are made up of thousands of tiny lenses that look like a honeycomb.

Isn’t nature just so cool? Well, to add to the visual diversity, there really is no better stand out than the vision of birds. While you may think to yourself “why? What’s so special about their vision?” let me just show you. It’s actually pretty cool.

Normally speaking, birds are pretty bizarre creatures when you start learning more about them. For example, penguins only have two taste ranges: salty and sour. And the Palila birds – native species to Hawaii – only eat the seeds of the māmane plant, which contain a level of toxins that could easily kill any other small animal. There’s also the fact that pigeons, of all animals on Earth, are believed to be the best at color detection and are often employed in search and rescue missions. While the various types of birds all have their own unique specialties and superpowers, there is one thing that they all have in common: eyesight that is far superior to most human vision.

Birds are what are known as tetrachromats, meaning they see four colors: UV, blue, green and red. By comparison, we humans are trichromats and can only see three colors: blue, green, red. Keep in mind, that the magenta UV “color” that we see is a “false color” since it had to be made visible to us humans for the demonstration. In nature, the definition of UV light is having no color.

Joe Smith, an ornithologist, explains that birds have the amazing ability to see a whole spectrum of colors, which are invisible to humans. In 2007, scientists, along with the assistance of a spectrophotometer, analyzed the colors of 166 North American songbird species, specifically looking at the ones who didn’t have an apparent physical difference between the sexes.

From a human’s perspective, in 92 percent of species, both the males and females look alike. However, during the study it was showed that these birds actually have colors, which are undetectable to the human eye, that they can see in order to differentiate between their genders. 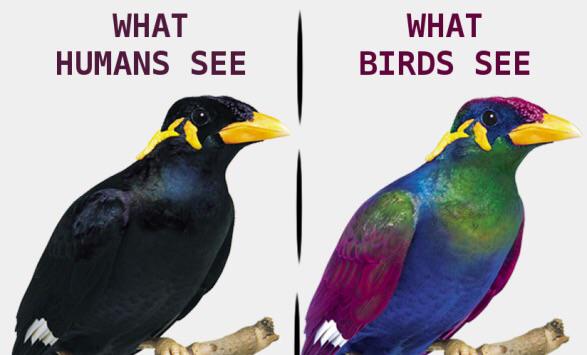 For example, the male Yellow-breasted Chat has a yellow breast that we can see – however in the bird world, both rivals and potential mates can also see ultraviolet feathers on his chest, and that is what sets him apart from the female Yellow-breasted Chats. The theory was proven again during another study where scientists placed taxidermied male and female Chats out in the wild in order to see how their living counterparts would react. Males stayed true to their territorial nature and attacked the stuffed male Chats while trying to win over the taxidermied females. This proved that the birds were clearly seeing something within the feather colors that the scientists couldn’t see.