Horse Is Brutally Attacked With Acid, But Is Recovering Thanks To Ground Breaking Treatment

An eight-month-old horse was found dumped in Clowne, Derbyshire after someone intentionally through acid on its face and legs. The poor horse was in excruciating pain, but was still alive. The horse was rushed off to an emergency clinic for pain medicine and to be evaluated.

Vet David Rendle at Rainbow Equine Hospital, located in North Yorkshire, had never seen a horse with such bad chemical burns. The skin on the face and around the eyes was completely scorched. The poor horse could not open her eyes. Cinders, as she was later named, remained calm even after the horrible abuse she suffered. 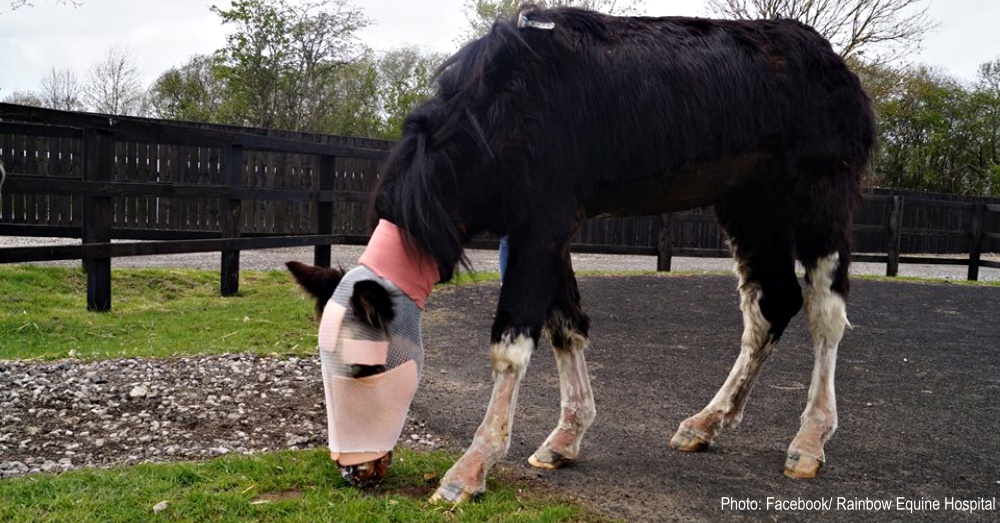 “She was anaemic due to the ongoing blood loss and a heavy burden of skin of intestinal parasites. A blood transfusion was given to increase levels of blood cells and proteins that are vital for healing. Once the treatment had started, she started to eat and become much brighter stronger,” posted the hospital.

The staff is concerned about the burns around her eyes and how the skin will heal. They dressed and wrapped it to prevent infection. Her overgrown feet were trimmed so she could walk comfortably. After being treated for the lice and possible worms, she was turned out on pasture to see if she wanted to graze. 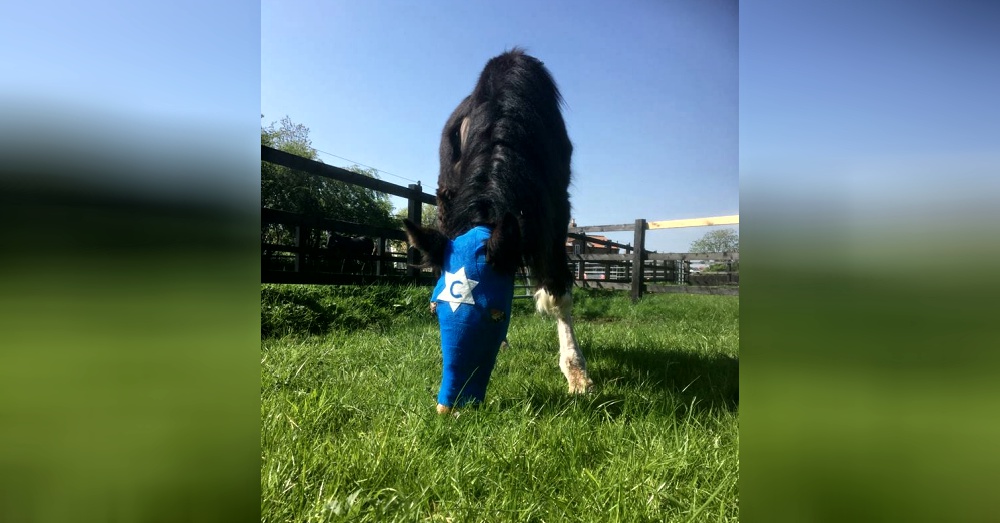 Slowly, she started to eat more and regain her strength. She loves to eat and is usually seen with her head down grazing. The hospital posted updates on social media and were humbled by all the generous donations and supplies they received for Cinder.

However, the greatest donation was yet to come. Since the staff has never dealt with chemical burns to this extent they were considering their options in helping heal the skin. They pondered over skin graphs and consulted with a human burn specialist, but decided to try a new technique that had never been done on horses. 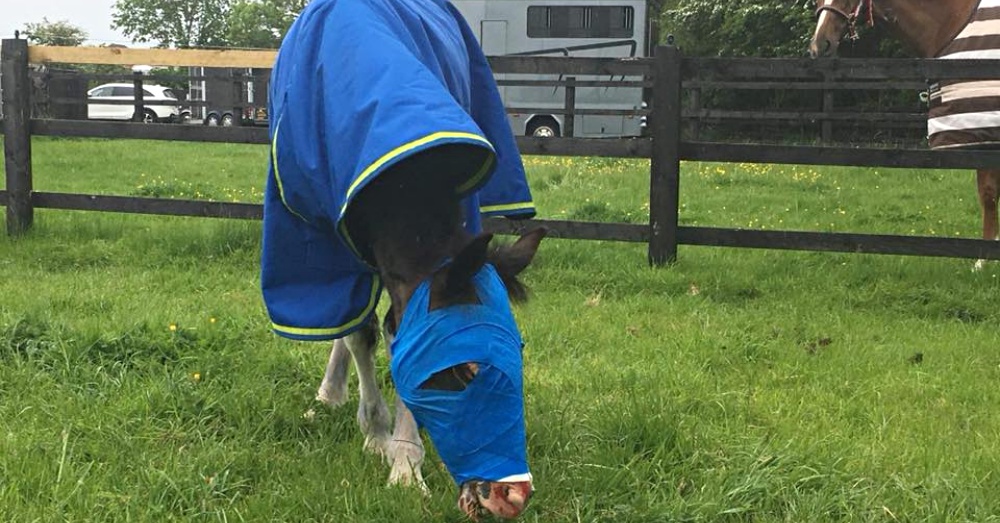 Doctors in Brazil had applied Tilapia fish skin dressings to humans to help heal burns with success. Vet Jamie Peyton, from the University of California Davis, was the first to apply this method to animals. Dr. Rendle contacted Dr. Peyton to consult on how this method could be used for Cinder.

Tilapia skin infused dressings applied to the face to help regrow the skin sounded like the best option. Cinder would be the first horse in the world to receive this ground breaking treatment. Dr. Rendle volunteered to come to the UK to help with the surgery. “We were particularly interested in the use of tilapia fish skin dressings that she had been using to treat veterinary burns patients. We investigated means of shipping the tilapia dressings to the UK for Cinders when Jamie went one better and offered to bring them in person, with the support of University of California Davis Veterinary Medical Teaching Hospital,” reported Yorkshire Post. 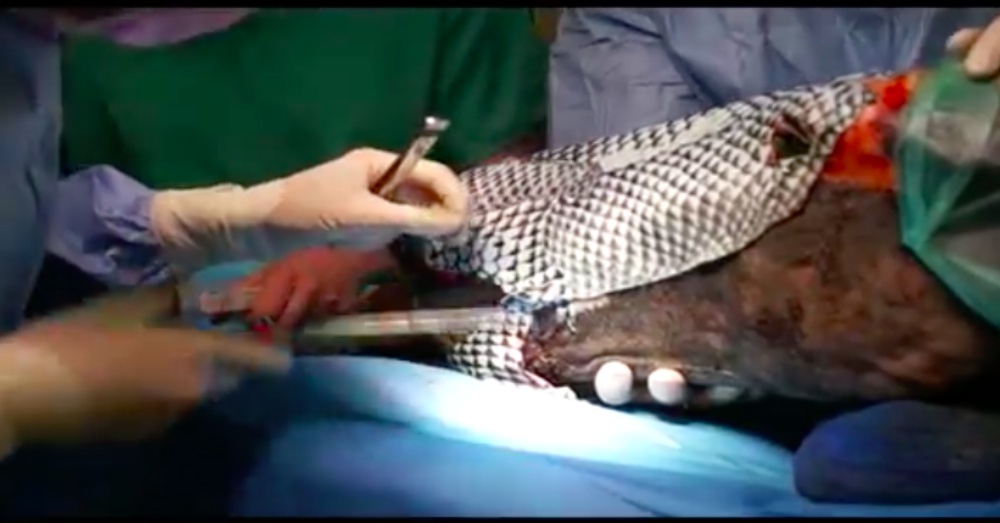 The surgery was a success. A few weeks after the surgery the hospital posted, “Cinders continues to do well. The novel tilapia fish skin treatment worked brilliantly and her deep burns are healing well, almost too well. She is having daily bandage changes and is extremely well in every way – she has developed a quite the attitude and hates being caught in the field! She has had a full clip and looks really well!” 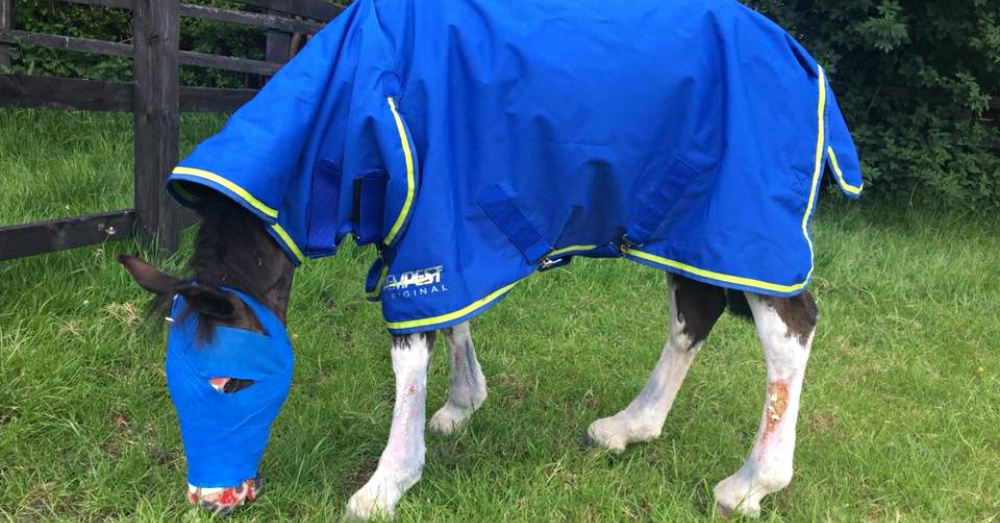 Her eyesight does not seem to be affected by the scorched eyelids. She is healing nicely and in time may need some more medical care with her nostrils, depending on how the skin heals. The vets are very pleased with the results from the new technique.

Cinder has a huge following that is rooting for her and generously donating to her recovery. This sweet horse will now get to live a happy and safe life.