He Was Barely Holding On, When His Rescuer Stepped In And Helped Give Him A Second Chance!

A woman was riding her motorcycle down the street one-day when she spotted something strange hanging out of the bushes. As she got closer she realized that it was a dog. The dog was so still that the woman wasn’t sure if he was alive. She got even closer and realized, that this pup was, not only alive but, seriously injured! Kind-hearted, the woman decided to take the injured pooch to a veterinarian to see what they could do.

Once at the vet, the pup was examined and it was discovered that his flesh wounds weren’t the only thing that ailed him. He had developed a skin disease that prevented hair growth, kidney disease, and issues with his blood cells. Wanting the pup to heal as best as he can, the vet started working on the pup’s treatment. And after a mere week, the pooch had started to show some improvement, but his leg was still acting-up on him. After two weeks spent recovering, the pup was improving much more! The only thing that hadn’t improved was the pup’s hair growth. According to the veterinarian, it would take, at least, around two months before one could see a difference in the pup’s hair growth. 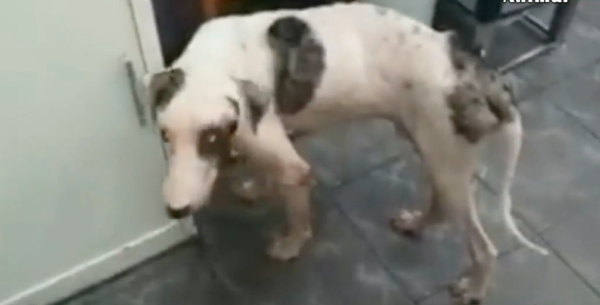 While his road to recovery was a long one, in the end it was all worth it! The pup now has a forever home where he is being given all the love he could ask for. His miraculous recovery is all thanks to the woman that found him and the many people that donated money in order to help lift the burden of the pup’s medical bills.

How To Adopt The Perfect Rescue Dog: Click “Next” below!