This year, GreaterGood.org and The Jackson Galaxy Project partnered up to make a difference for shelter cats. Shelter cats often have a harder time making a connection with people than dogs do, which makes it more difficult for them to be adopted. But teaching cats tricks that help them interact with humans can make a huge difference! And so the Cat Pawsitive High-Five Day Contest was born.

For the High-Five Day Contest, cat owners and shelters were asked to teach their cats how to give high-fives and then video them doing it. 268 videos were submitted, and 54,000 votes came in for the public’s favorite high-fivers! That’s a lot of kitties learning new skills and a lot of people spreading the word that cats can be trained to do amazing things and are deserving of loving homes! 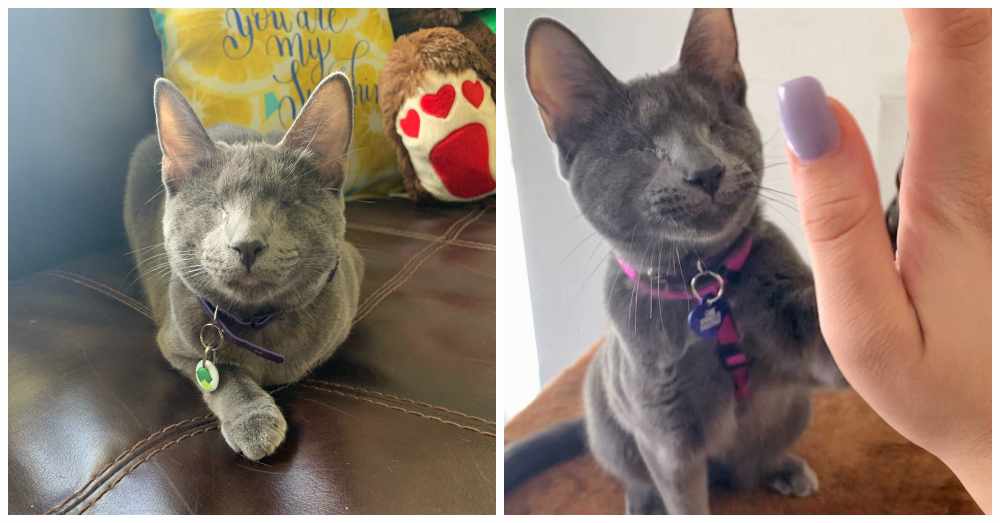 Lime is a blind kitty with an extra-special story. Brynna Rosario came across this kitten shortly after the death of another cat she owned, and she realized Lime was the exact doppelgänger of her beloved Lemon—a male cat with the same gray coat and blind eyes. While Lime could not fill the hole Lemon left in Rosario’s heart, she knew she was meant to adopt Lime and give her the best life possible. You can read more about Lemon and Lime here.

“Adopting Lime was one of the best decisions of my life,” says Rosario. “People are always so amazed when I tell them she’s blind, but honestly, I forget she is blind all the time! I feel there is some stigma behind blind kitties, that they need a lot of help with simple things. Well, Lime is here to prove everyone that that is simply not true.

“Teaching Lime how to sit, spin, high-five, come when called, and walk nicely on a leash was easier than teaching her sister kitties that can see,” Rosario continues. “My hope is that Lime can serve as a great example that blind cats are just like any other cats, they just see with their hearts.”

Lime has two cat sisters (Deadpool and Rajah) and a dog brother (Jordin), and a dog sister (Letty). Letty, in particular, is Lime’s best friend and constant companion. Lime even learned to walk on a leash so that she could go outside with Letty instead of crying every time her favorite sister was taken out for a walk. 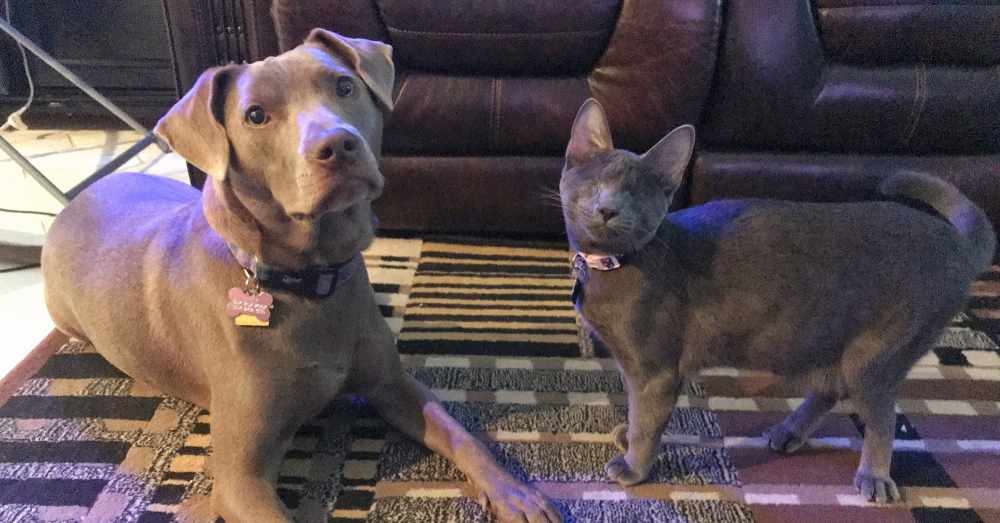 “Honor Animal Rescue is an incredible shelter that does so much for pets in nee,” says Rosario. “Their location is breathtaking and they are undergoing an expansion. It would be awesome for us to be able to help them in any way we can.”

Lime’s high-fives earned the Animal Honor Rescue in Bradenton, Florida, a $2,000 cash grant! You can follow Lime (and Letty and the others) on Instagram. 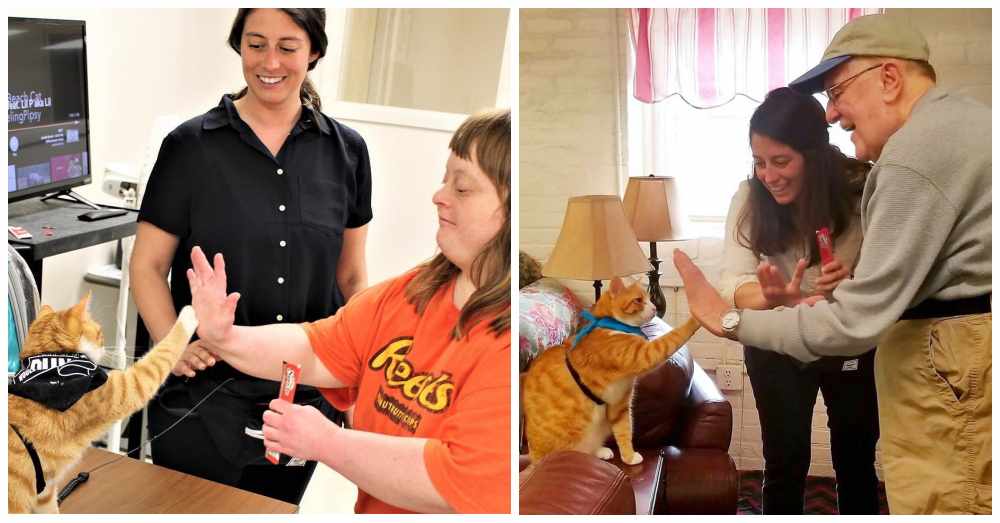 Photo: Courtesy of Emily and Pip

When Pip first came to live with Emily, he had serious eye problems that kept him from opening them all the way, and he was thought to be deaf. With some TLC and a few vet visits, however, his ears were soon cleaned out and his eyes healed up. Since then, Pip hasn’t done much sitting still. He preferred to make messes and terrorize the other cats in the house, Natty and Mowgli.

“At this point, Pip was spending most of his day knocking over everything and anything in our house,” Emily remembers. “Dirt was everywhere. (Honestly, dirt is still everywhere.) He ate every meal as though it was his last, shoving his head so fast and hard into the food bowl that the pieces would fly across the room. If Natty and Mowgli were sleeping soundly, he would quickly wake them up by jumping on their heads. If a window was open, Pip was climbing the screen. If a cup of water was left unattended, it was soon knocked over. If Pip woke up before us in the morning, he would jump on the bedside table and make sure we were up too. He didn’t like to use the litter box, and instead went in our house plants. It was Pip’s world, we were just living in it.”

The family decided to start taking Pip on walks outside to release some of his energy, and that’s when they discovered that he really just needed something to do! He loved being outside and proved to be very trainable. He was very content learning new tricks and stopped destroying the house.

Pip’s family decided to try bringing him to nursing homes, schools, and other places as a form of entertainment and therapy for people of all ages, even though he isn’t technically old enough to be certified as a therapy cat. Emily gives a presentation about him, and then Pip wows the crowd with some unique tricks.

Emily says when they learned about the High-Five Day Contest, Pip was eager to learn, and it took less than a day before he was consistently high-fiving. Now he will high-five just about anyone! 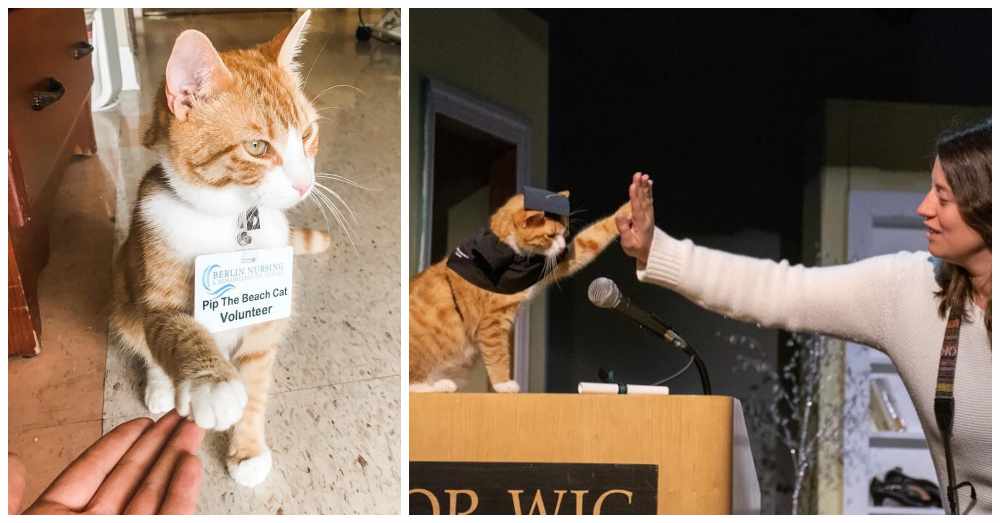 Photo: Courtesy of Emily and Pip

“Pip continues to give out high-fives all over!” Emily reports. “He volunteers his time at least 3 days a week, visiting nursing homes, developmental centers, schools, Veteran’s homes, and assisted living facilities performing his unique style of animal-therapy. He has just released his first children’s book, Pip’s Guide to Ocean City, and started his ‘Little Pip Project,’ where he designed a stuffed animal in his likeness, and for every one that he sells he donates one to a person in need, starting just this week with surprising his local nursing home residents with their very own Little Pips!”

For his high-fiving talent, Pip has earned a $3,000 cash grand for BARCS! Emily says, “We chose BARCS because they recently invited Pip to be the VIP Cat Model at their Pawject Runway show in Baltimore with Show Your Soft Side. We saw the amazing work that they do and the way the community embraces them, and we wanted to give back to them in some way too!” 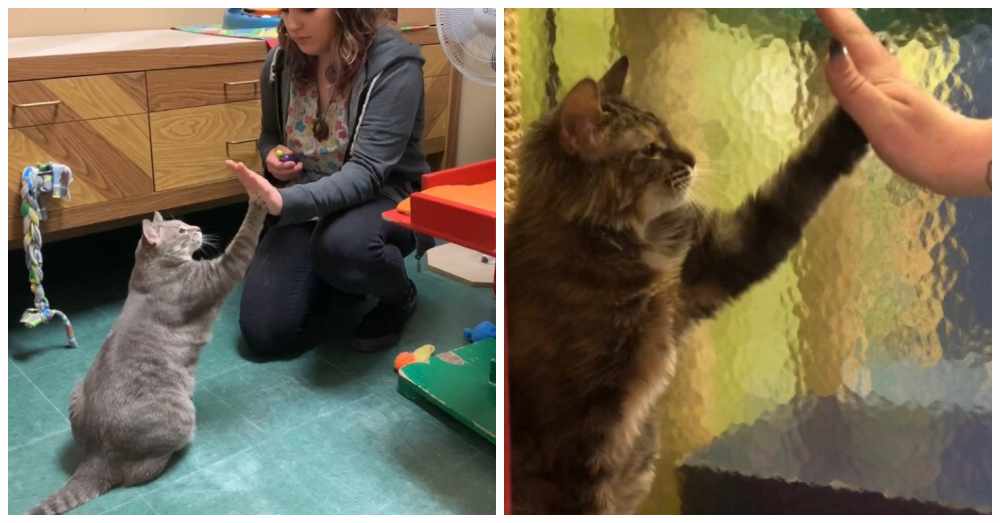 “The Oshkosh Area Humane Society Staff are ecstatic and proud to have won the Cat Pawsitive National High-Five Day Contest! Our organization prides itself on being ‘Different on Purpose’ and we feel our dedication to providing training and enrichment to our animals is evidence of what makes our shelter such a special resource for animals in need,” says Cari Tetzlaff of OAHS. “Teaching the “high-five” behavior was a simple and effective way to have fun with our cats while attracting potential adopters. The $5,000 prize will be used to help OAHS launch our brand new Behavioral Department on July 1, 2019. The purpose of this program will be to provide cats and dogs in our care with expanded access to activities and training that will relieve stress, help them express species-typical behavior, and lay a foundation to modify behavior to attract adopters.”

Tetzlaff says OAHS selected cats to train for the video that they thought might have trouble getting adopted quickly due to special needs. The staff trained several cats, some of whom never even got filmed for the video because they were adopted so fast! 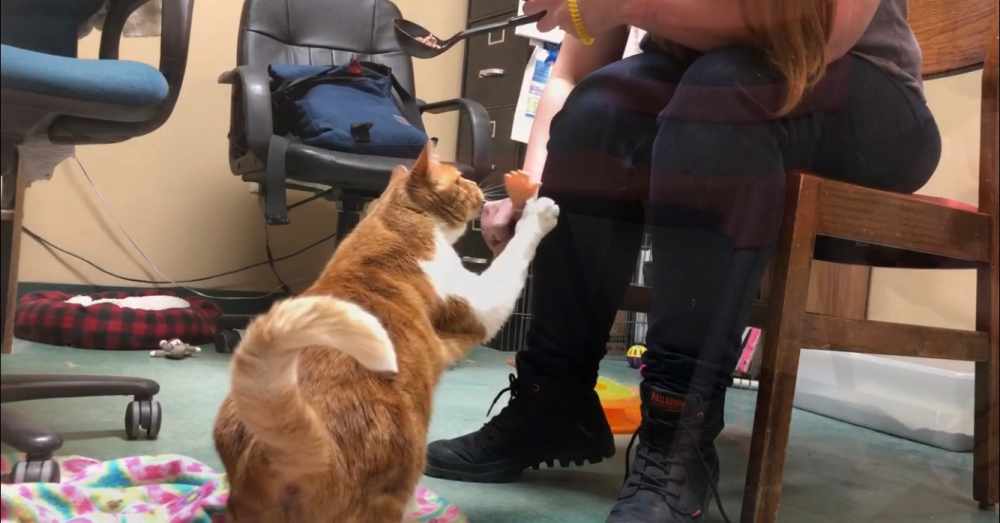 Tetzlaff reports that Tracer and PJ have been adopted since the video went up online, but OAHS is still in search of homes for Aven, Charlie, and Rocky. “We know their people are out there somewhere and we are excited for them to discover their new kitty companions at OAHS,” she says.

This clowder of kitties won the Oshkosh Area Humane Society a $5,000 cash grant as well as a trip to attend Lil BUB’s birthday party! Attendees at the party will even get the opportunity to meet Jackson Galaxy!

High-five, winners! Thanks for helping us raise awareness for shelter cats in need of forever homes. We hope this challenge has shown people around the country how amazing cats are!

Check out the video below featuring the winners of this year’s contest, or click here to see their individual submission videos. We hope to see even more high-five videos next year!