While the Yulin Dog Meat Festival has gained global notoriety for inhumane and horrific acts of animal slaughter, a massive rescue effort mounted just days before the event has freed at least 1,300 dogs and cats from certain death.

A truck transporting animals earmarked for the meat trade was en route to various Guangdong slaughterhouses in Southern China when it was intercepted by more than 100 activists. Lacking the required health certificates for the animals, the truck driver was persuaded to relinquish his cargo, or else face consequences from Chinese animal transport regulations, Humane Society International reports. 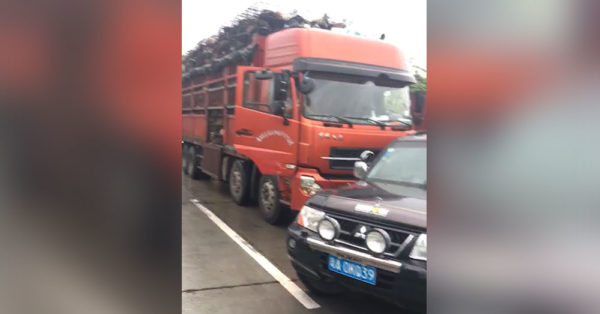 Those who weren’t involved in working with local law enforcement to free the animals were diligent in other ways, providing food, water, and comfort to the dogs and cats who had traveled nearly 2,000 kilometers in cramped containers. 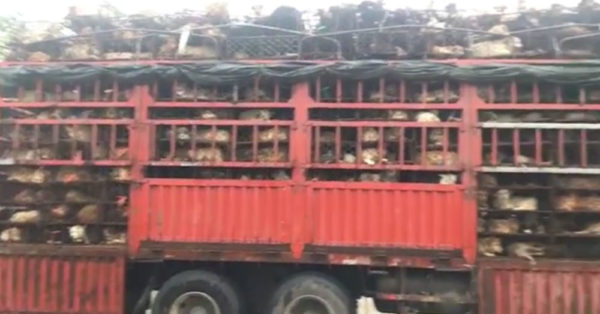 Source: HSUS
At least 1,300 animals were forced into the cramped quarters of the truck.

“This was an audacious rescue, the single largest dog and cat truck rescue that we’ve seen so far in China,” said Dr Peter Li, China policy specialist for HSI. “We applaud the brave work of the men and women animal lovers who saved the lives of these terrified animals who were headed towards a brutal slaughter.”

The Gansu province, where the animals are thought to have come from, is often rife with stories of stolen pets. And, HSI maintains, many of the animals confiscated showed signs of being raised as companion animals, unlike those bred specifically to be butchered. 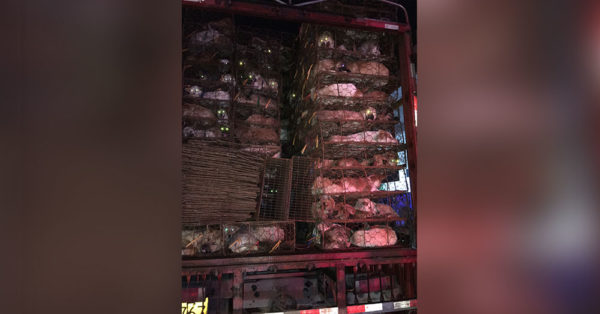 Source: HSUS
Twenty of the animals died in transit from the Gansu province, en route to Guangdong.

“What has made this rescue of far-reaching significance is that hundreds of young people from Guangzhou, the once so-called ’world capital of dog and cat meat consumption,’ have participated in the rescue,” Li affirmed. “These young activists are the hope of a new China that will be free of the dog meat trade cruelty. The activists found the dogs and cats wailing out of pain and despair, stuffed into tiny cages and hardly able to move. Many were sick and starving, with disease spreading rapidly in the tight confines of their cages.” 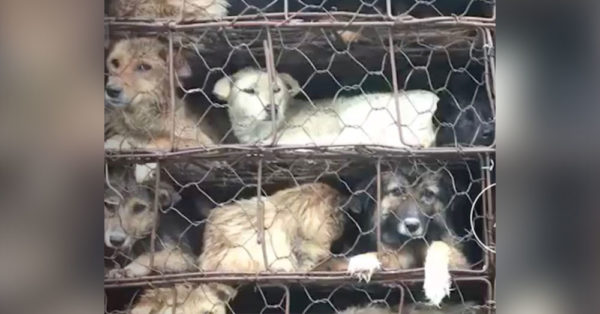 Source: HSUS
Many of the animals were believed to be stolen pets.

At least 20 of the animals died while being transported, before rescuers stopped the truck, Shanghaist reports. 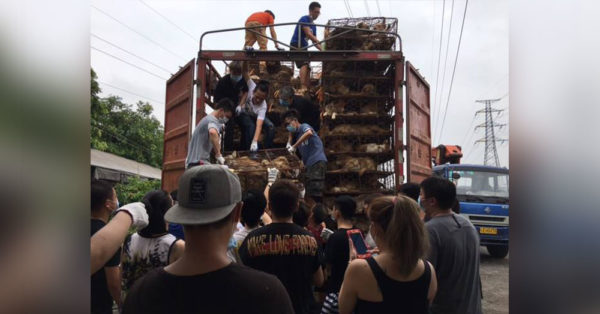 Source: HSUS
Rescuers help remove the animals from the truck.

As the Yulin Festival begins on the summer solstice, this particular rescue reinforces the importance of year-round vigilance toward animal cruelty. Support Humane Society International’s efforts to end a cruel dog-eating festival in China.
Your donation will go towards supporting our dog meat campaigns in Asia to end the dog meat industry, whether closing intensive dog meat farms in S. Korea, intercepting trucks crammed with dogs headed to slaughter in Vietnam, or caring for confiscated dogs from Yulin and other dog meat markets and promoting their adoption in China.
Make a difference