Greedy Cat Goes Viral After Gobbling Down Meal, But Some People See Cause For Alarm

Many people think of cats as refined household pets who quietly nap, play, and possess a sense of decorum not shared by their canine counterparts. But one greedy cat has shown the error of this common perception by gobbling down its food with a speed that would put wolves to shame — and going viral in the process.

The video, which you can watch below, begins with one cat politely nibbling away at a bowl filled with dry kibble. But then a second cat suddenly edges in and plants his or her face directly into the bowl, pushing the second cat out of the way as s/he greedily scarfs down the meal. 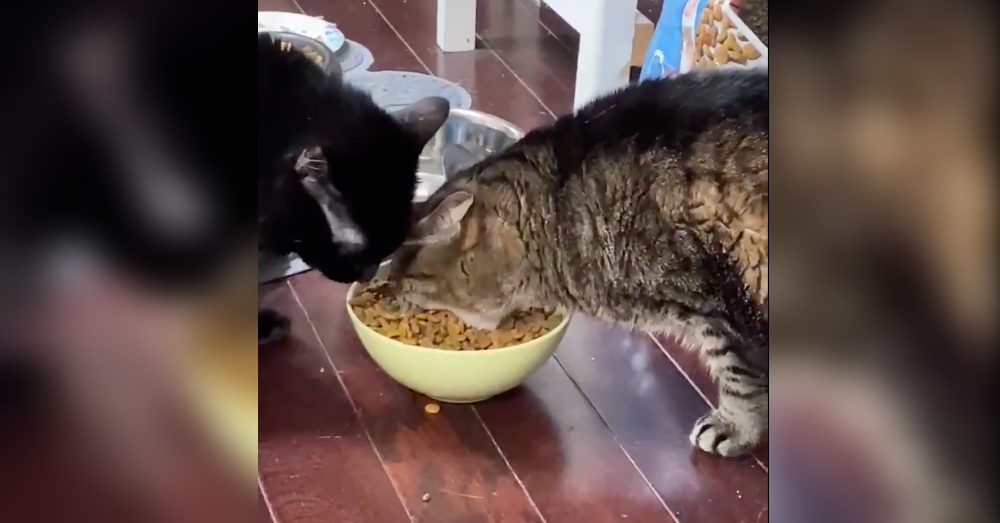 Some users have likened this unusual move to a hungry hippo board game, where the namesake animal gobbles up all the dice in a single bite. “What in the world kind of pig cat eats like this?” user tramL116 captioned the video, which quickly went viral on Twitter.

Others reported being mesmerized by the greedy cat’s reaction and watching the video again and again. “Would die for the pig cat,” one user gushed. “Seems fuzzy and sweet but also kinda rude,” another person joked.” Users were also entertained by the black cat’s pleading look to its owner. See? S/he’s doing it again! Can’t you do something? 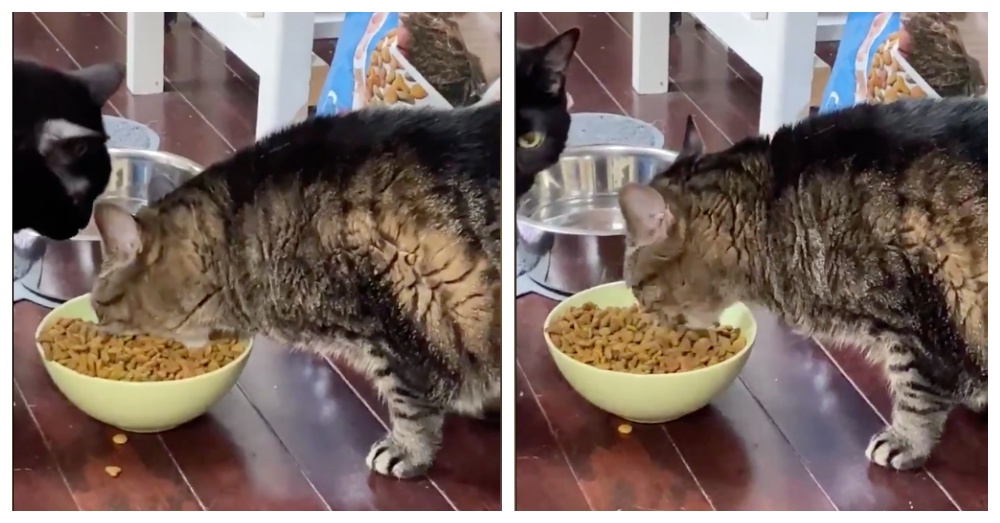 But many people were concerned by the cat’s voracious appetite, which they saw as a sign of unhealthy and anxious behavior. “Why are you feeding both cats out of a single cereal bowl filled to the top?” one user protested. “Use a plate (i use old saucers), and maybe raise the plate on a small box. And consider only putting down 1/4 c dry food per cat at a time. Insecure cats eat this way.”

“Heartbreaking,” another person agreed. “Give him his own bowl in a separate place. No competition!”

Others guessed the cat had probably been rescued from a life on the streets. “If a cat has been feeding for itself outdoors before it finds a home, this happens,” another user noted. “When they finally get regular food, their instincts are to gorge. It causes extreme weight gain. I feed mine in different spots for that very reason. They learn that no one is coming for their food.”

what in the world kind of pig cat eats like this pic.twitter.com/q1LojIN6bY

Obesity is a growing health concern for American house cats, so we really hope their owner notes these concerns and takes appropriate action. “Fifty-four percent of cats in the U.S. are obese or overweight, which can lead to other health problems like kidney, liver, heart, and pancreatic disease,” according to research by the Association for Pet Obesity Prevention. Check out our tips for helping your cat live a happier, healthier, and longer life.

Have you ever seen a cat eat this way? How do you keep your cats happy and healthy?