This Golden Came Home From A Shelter With A Lot Of Baggage, But His New Family Took It In Stride!

This story is absolutely heartbreaking! Murdoc, a Golden Retriever, was living in a shelter when a man came to adopt him. His new owner brought him to his very own forever home where he was given the love and affection that he needed. But Murdoc came with some baggage. For some reason, Murdoc wouldn’t sleep at night. Instead, he would sit at the door of his new owner’s bedroom and just watch his owner sleep. At first the owner thought it was because Murdoc just hadn’t gotten used to his new home. But after many nights of this continuing, the man tried to tire Murdoc out by giving him extra play time before bed. Despite his attempts, Murdoc was still unsettled. He refused to fall asleep before his new owner. 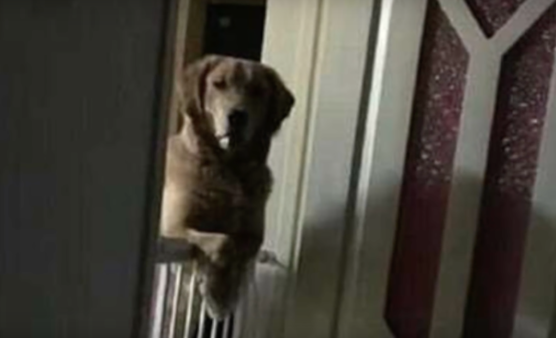 Worried that there was something wrong with Murdoc, his new owner took him to a veterinarian. But the vet couldn’t explain Murdoc’s behavior either. So the man went back to the shelter. He spoke with the staff there, told them of his concerns and what had been happening at home. Surprisingly, the shelter’s staff immediately knew what was wrong. Apparently, before Murdoc was brought to the shelter, he had another family. When his prior owners could no longer care for him, they took Murdoc to the shelter while he was still asleep and abandoned him there. The staff at the shelter believed that Murdoc would watch his new owner sleep because he was scared he would be abandoned again.

Thankfully, Murdoc’s new owner was a kind one. Instead of bringing him back to the shelter or ignoring the behavior, Murdoc’s new owner did everything he could to assure Murdoc that he was a member of the family. He hopes that Murdoc will eventually learn to trust him and no longer feel the need to stay awake at night out of fear of being abandoned
Share on Facebook
Share on Facebook