A Sanctuary Rescued A Goat From A Dairy Farm, But They Never Expected THIS To Happen!

This goat, named Butterscotch, was rescued from a dairy farm and now resides at Animal Place Sanctuary. Animal Place rescues farmed animals from slaughter and provides them with permanent sanctuary or homes. They operate a 600-acre sanctuary in Grass Valley, California, as well as a 60-acre adoption center in Vacaville, California. 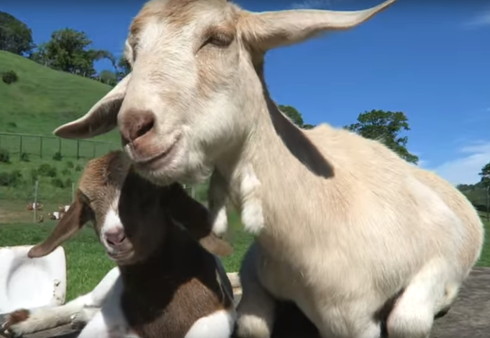 Dairy farm goats are used for exactly that: dairy. They are raised solely for dairy and are kept constantly pregnant so that they produce milk. Then once they give birth, their babies are sadly taken away from them so that the farmers can get the milk as opposed to the babies. When Butterscotch arrived at the sanctuary, she was over two months pregnant but they did not know that; especially since Butterscotch was very young herself at a year old. One afternoon the rescue ranch manager came outside to see Butterscotch in labor and was very surprised. Thankfully, because Butterscotch was rescued before she gave birth, her baby, named Bella, will get to stay with her mama forever! The two have a great bond and are inseparable. Watch them in the video below: