This Gentle Giant Likes To Pretend That He’s A Lot Smaller Than He Actually Is!

Tydus is a big dog! No joke, this Alaskan Malamute, when standing, is so huge he practically towers over his owner. It is absolutely amazing to see! Despite his size, this giant ball of fluff thinks he is a tiny little lap dog… meanwhile he can’t actually fit in his owner’s lap! But like all good owners, they ignore that and indulge his lap dog behavior. 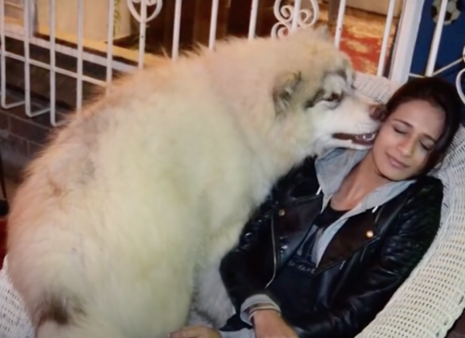 At one point, like all other puppies, Tydus was a tiny little thing. I know, it’s hard to believe. He actually resembled a bear cub with all that fluff. But as he grew older… he just didn’t stop growing. He’s a bear of a dog with a huge heart to match his huge size. He has such a great and positive attitude that it would be hard to be intimidated by him. He’s so playful and loving, he really is just a giant teddy bear that loves to cuddle. He enjoys being held and love to give kisses and harmless little nips to show his affection. But underneath all that love (and fluff, you cannot forget about that fluff), lies a mischievous soul. At two and a half years old, Tydus still has the soul of a puppy. He loves to create havoc… and just being silly in general.

Tydus is a great example of proving that the size of the dog doesn’t matter. It’s the size of their heart that truly shows how good and loving a pup can be. And let’s be honest, how can you not just melt at the image of this giant fluff ball goofing around?