Cat and dogs have been mortal enemies since the dawn of time. It may seem like they get along fine and dandy in some households, but they are notorious for being suspicious of each other, if not downright aghast at the other’s existence.

When fights break out among a home’s cat and dog, it’s often hard to tell who started it and who’s to blame. Was the dog too playful or too rough? Was the cat too sneaky or aloof?

One pet owner thought he’d get to the bottom of the relationship between his cat and dog siblings. So he set up a camera.

But what he ended up capturing is beyond your wildest imagination….

But it’s really, really funny, and went viral after it was posted online. 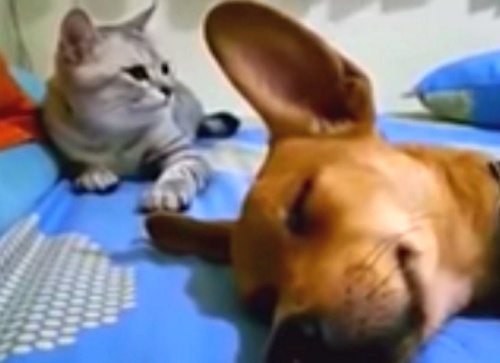 The video begins quite peacefully. Dog and Cat are lazing about on the bed. Dog is slipping into some happy doggy dreams and becoming very relaxed. Cat is surveying the area, relaxed but still regal, debating what to do next as Ruler of the Household.

Then, suddenly, a noise breaks the silence.

Dog has let out a toot. But he’s so deeply asleep, it doesn’t even stir him.

Cat does her best to ignore his lewd and rude behavior for a moment, but it’s difficult. She gives him the side eye, irritated but trying to tamp it down…

Dog has no idea what’s about to happen. Poor Dog. 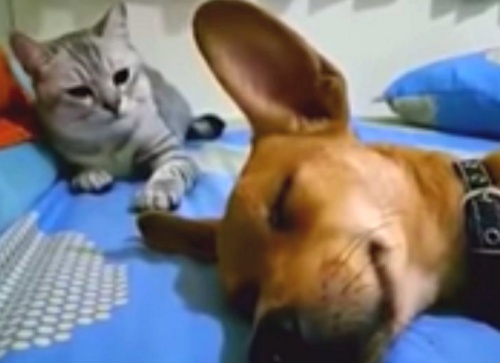 Abruptly, several seconds after the offending noise (and, we presume, smell), Cat lashes out at Dog, whacking him soundly on the head two times in quick succession.

Dog wakes blearily from his sleep, startled, and raises his head.

Then he rests his head back down. Did he learn his lesson? Only time will tell.

We’re so grateful that their owner was able to capture this lesson in etiquette and was willing to share it with the world. Here’s hoping that Cat doesn’t have to endure anymore of Dog’s gas, and that Dog won’t have to take any more whacks from his sister.