German Shepherd Plays Board Games With The Family During Lockdown

This year has meant spending a lot of time indoors in our homes. While there are many of us who have been trying to use the time at home to do home improvement projects or organize our living spaces, there are those of us who know that sometimes you just need to have some downtime. And what better downtime than gathering with our loved ones in order to play some board games?

While we may be playing more board games together than in years past, there is one family who has the most unique player joining them for Jenga: a four-year-old German Shepherd.

Any game, whether it’s Jenga or Tic-Tac-Toe, Anya plays them all.

As her owner, Lori Knoble, noted, the pooch is quite adorable and never fails to astonish them with her cleverness. According to The Good News Network, Knoble stated that she and her husband, John Knoble, acquired Anya from a local breeder when she was just a 12-week-old pup. It became quite clear rather quickly that she was pretty intelligent. The little pup had a natural talent for helping Knoble around the house with chores like removing the clothes from the dryer or fetching the T.V. remote.

The gameplay didn’t start until April when the couple was quarantined inside their Clevland, Ohio home. When they were searching for ways to keep busy, they decided to play a game of Jenga.

As the couple set up and began playing, it was clear that Anya wanted to join the fun. And she did! The pup picked up a Jenga block, pulled it out, and then waited for the next person to take their turn. 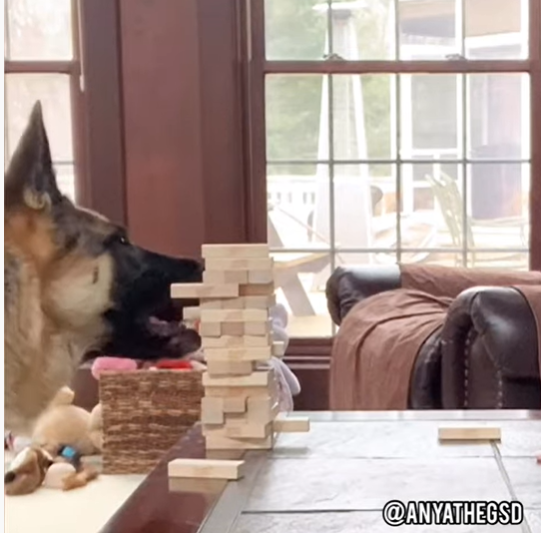 They didn’t have to train her at all, she just seemed to understand the concept of the game and wanted to play along. How cute is that?

The couple then took a video that proved she knew what she was doing – and it definitely warms the heart to watch. In the clip, the dog can be seen grabbing the block, pulling it out with ease, then placing it gently on the tabletop as she waits for the other players to take their turns.

Seeing how cute the game is, it’s clear that the couple is quite happy with their pup.

As Knoble said according to The Good News Network, “She has truly been a blessing to us and we aspire to share her light-hearted, amazing, silly antics with the world in hopes of spreading love and joy.”

Watch the game of Jenga below: