A rescue story by Erin Crowley

On a blistering hot day in August, we discovered a tiny kitten at the edge of life. She was sick, could barely breathe or open her eyes due to a terrible upper respiratory infection, had a big bloated tummy from tape worms, and was covered in fleas on every inch of her tiny body. We really didn’t think she would survive the night, but knew we couldn’t leave her there to die. So we wrapped her in a towel and brought her home in a garden pot to see if a miracle could happen to save her life.

We stayed up all night, feeding her formula and tuna juice with a dropper, and trying to give her strength. By 7am, she was still alive and we jumped in the car to rush to a vet nearby. At only 8oz, the amount of medicine we could give her was small, but the vet began her on a course of antibiotics for both her eyes and lungs, and prescribed “steams” 3-5 times a day to help keep her airways open. Her odds of surviving were very low, but my husband and I were determined now – this kitten had to live. 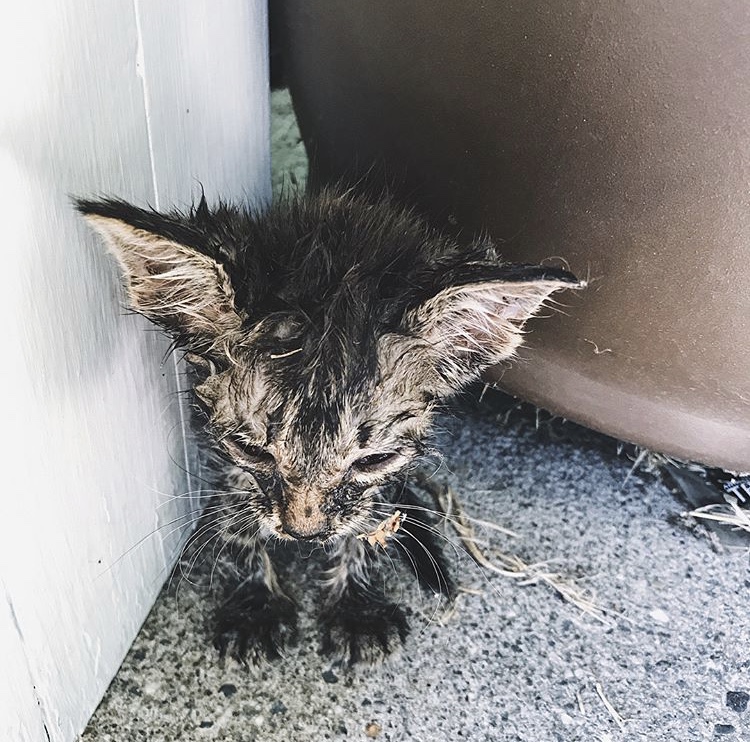 The first two days were tense. Every time we looked in her box we prepared for the worst, and she struggled to fight against the infection or take much food down. We bathed her in Dawn dish soap to combat the onslaught of fleas, and took turns enduring the nearly unbearable heat of a steamy bathroom during high summer temperatures outside. Nothing seemed to be working, and we began to come to terms with the fact that this little kitten was probably going to pass away soon, despite our best efforts.

But then, our first miracle happened: we introduced this sick kitten to Gatsby – the 4-month old puppy we had just rescued from the shelter a month earlier. 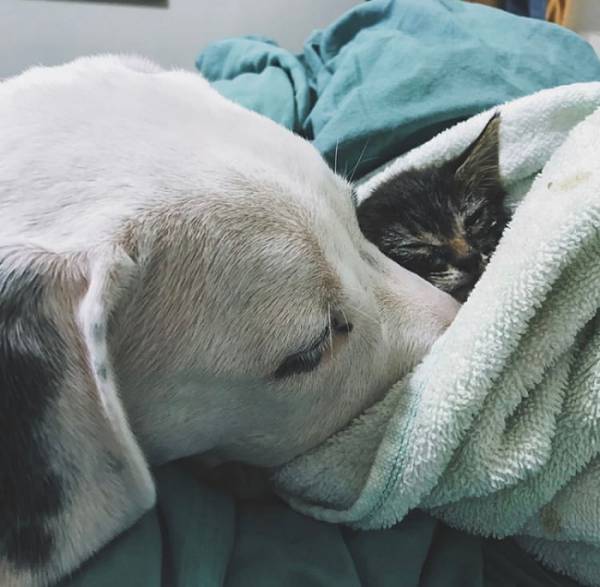 We knew that just one excited move by him could crush and kill her, and he was just a puppy himself who might not know how to behave around this tiny creature, just the size of our palms. We set her down on the bed, wrapped in her towel, and held our breath. But we were amazed by his reaction – Gatsby transformed into the most delicate and gentle dog we’d ever seen. He sniffed her, and immediately crawled close and began to lick her head lovingly. He nuzzled his nose into the towel with her, and rested her head on top of his snout, where he lay calmly and she relaxed into the warmth of his touch.

The kitten began to transform before our eyes. The warmth and connection of the puppy against her tiny body gave her life, and she immediately began to fight. Instantly, Gatsby and the kitten formed an inseparable bond, and we decided that it was time to give the kitten a name – Professor Minerva McGonagall – after the bravest Gryffindor tabby cat we knew. 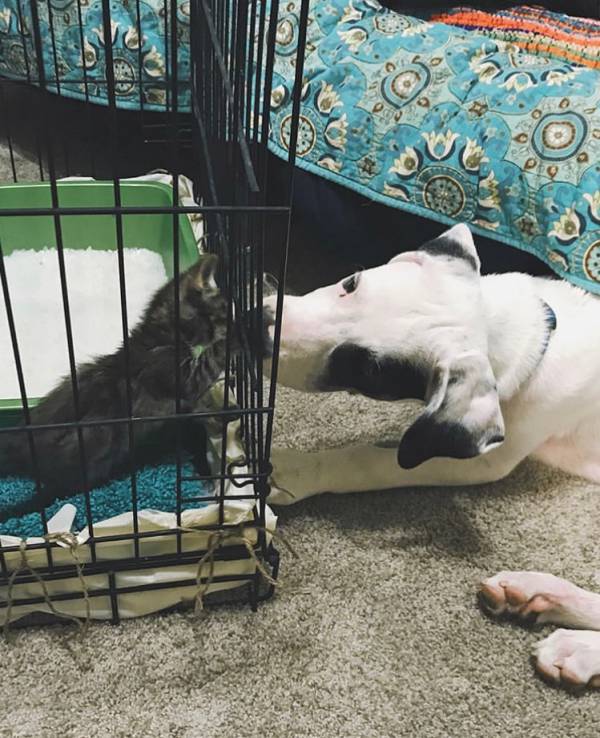 For the next two weeks, Gatsby and Minerva grew consistently closer. The very first thing Gatsby wanted in the morning was to say hello to his kitten, and she immediately would crawl out of her blankets to kiss his nose. As the antibiotics finally set in, the worms in her tummy disappeared, her lungs opened up, and her big, brown eyes started to look out clearly into the world. She was beginning to thrive.

A second course of antibiotics, what seemed like 1,000 shower steams, many sleepless nights, MANY hours of helping her potty, and lots of cuddles and kisses later, Minerva was finally out of the woods with her health, but her friendship with Gatsby was only just beginning to improve the health of her heart. 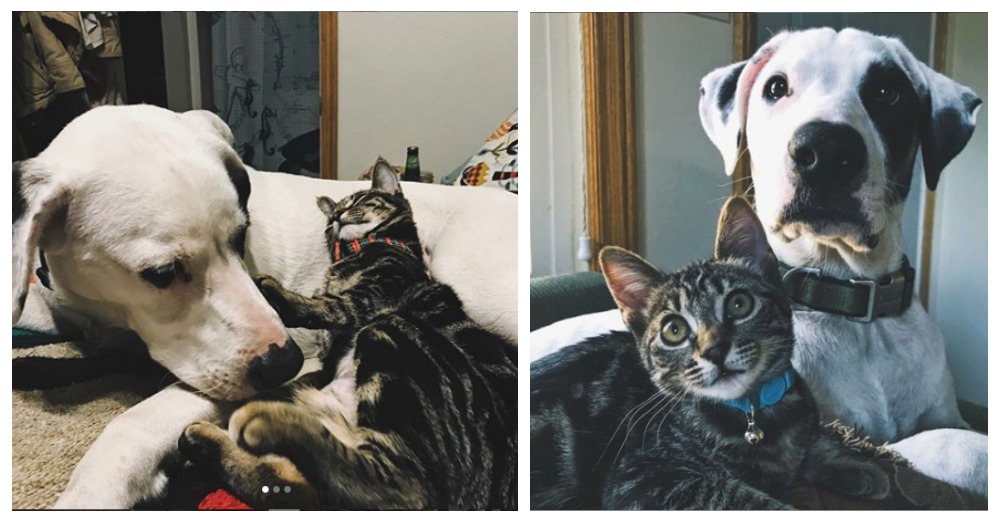 He kept her warm and snuggled close while she purred against his belly. They would play together for hours and bring so much joy to each other’s day. He would chase her around the house, she would zip under his legs and pounce on his back, and then they would tire themselves out and fall asleep inches apart. Gatsby was her big brother and protector, who helped her feel brave as she explored this new and big world around her, and Minerva was the energetic best friend he was missing in his life. 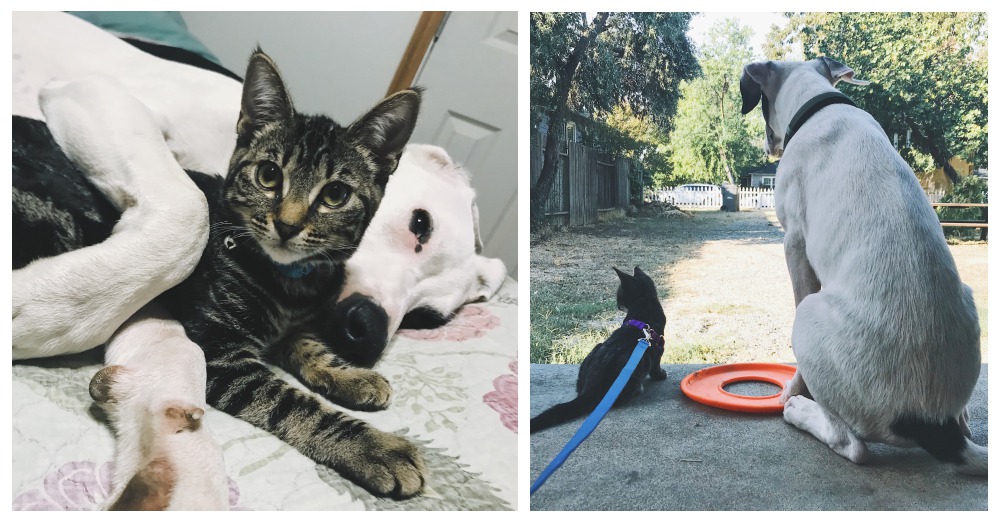 Now, Gatsby and Minerva are more than a year old and their love continues to amaze us. Fully grown and full of zest, Minerva is a healthy, stunning, and vibrant cat who makes an equal partner to play fetch with, and loves to copy her brother when he sits for treats (because kitties want treats, too!). They still cuddle each other as often as they play, and still seek each other’s comfort as often as when they were little babies.

These two have an incredibly special bond, and we can’t imagine life without them. More than that, I don’t think either of them would be the kind, affectionate, or thriving animal they are today without each other.