Living In The Wild Trying To Provide For Her Pups, This Momma Helps Rescuers In A Very Different Way

After being abandoned in Central California, Gaia was left to roam the streets on her own. Unfortunately, her bad luck didn’t end there. Shortly after being left on the streets, Gaia was injured after being hit by a car. But Gaia remained strong. Despite her injuries and lack of home, Gaia was able to give birth to her three adorable puppies: Sydney, Matilda, and Gabriella. After the birth of her pups, it seemed as if Gaia’s luck had finally turned. Two women found the family of four and decided to try to help. They left food and water for Gaia and her pups, and reached out to The Bill Foundation for help in saving the family. In turn, The Bill Foundation reached out to the Hope for Paws rescue organization. Eldad Hagar, a Hope for Paws rescuer, immediately responded to the call. He left Los Angeles at 3 a.m. and traveled to Gaia’s last known location. 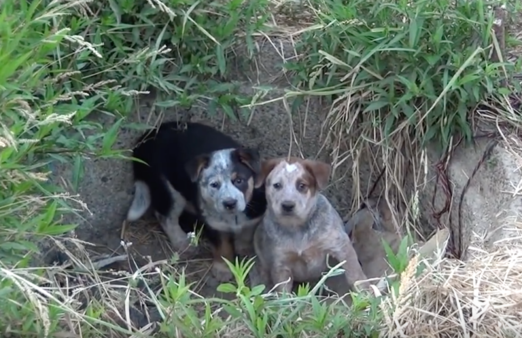 Eldad arrived shortly after sunrise and spotted the puppies right away, but Gaia was nowhere in sight. Not wanting to approach the puppies without knowing Gaia’s location, Eldad began to scan the area. It wasn’t until a passerby pulled over, that Eldad learned that Gaia had, yet again, been hit by a car, but this time she didn’t make it. Not knowing what to do and not wanting to leave the pups, Eldad tried everything he could think of to lure the three from their hiding place inside a drainpipe, but nothing would work. The three pups were so wary of human contact that it took over six hours for Eldad to bring them to safety! But his perseverance prevailed. He was able to rescue all three pups and bring them back to Hope for Paws where they were given the love and care that needed.