When This Woman Attended A Convention For Furry Friends, She Expected Something Completely Different

A woman who brought her Bernese mountain dog to a “furry convention” was simply looking for some fun for her friend, and after an awkward but warm reception, that’s exactly what she found.

When the the Motor City Furry Con opened its doors, it perked the ears of Cheryl Wassus, a southeastern Michigan native. Wassus, a volunteer with Pets for Vets, an organization that matches service animals with military veterans, learned that the convention was raising money for her nonprofit and expected to see pets aplenty when she arrived with her therapy-dog-in-training, Link.

But instead of the furry friends Wassus expected to see, the curious couple were greeted by a legion of IRL furries, humans who enjoy dressing up as alter ego animal characters.

Story is: Mom helps run Pets 4 Vets, which Furrycon chose as their charity of choice this year. She volunteered, not knowing what event was https://t.co/s077WbY76Y

Her son, Kenny Wassus, a producer for New York Magazine, shared images of his mom’s visit to Furry Con on Twitter. Before long, photos of Link and Cheryl were popping up on feeds around the world.

In her defense the logo/branding totally looks like that of many pet rescues in the midwest, early internet-ish, b&w, the obligatory paw lol https://t.co/nXzg5J07xY

According to Cosmopolitan, Wassus was asked to speak on Pets for Vets at the convention but was given little detail beyond that.

“I usually try to do some research the night before I go to these events, but the website was pretty obscure,” she said. “It had links and information on how to register but no pictures. So I just assumed it was a regular business convention of some sort.”

my mom thought furrycon was a pet event and volunteered w our therapy dog 😆 pic.twitter.com/mizlydLxjl

Her assumptions were challenged, but in the end Wassus found she wasn’t barking up the wrong tree. The positive cause she represents is supported by many different walks of life.

“This is just a whole subculture I wasn’t even aware existed,” she told New York Magazine. “When we set up tables and do promos and educate the public and do outreach, I had no idea the outreach was going to be other human … furry people. I guess you’re never too old to learn.”

the furrycon mixup story has gotten too big and went to link's head now he thinks he's a goddam hotshot, look at this idiot pic.twitter.com/ebYRCfi2yb

Link enjoyed the experience too, albeit not without a few exploratory sniffs.

“It was a little embarrassing at first because Link was just a little curious why people were wearing tails, so he was doing some serious tail-sniffing and checking out people,” Wassus said. “They weren’t offended, though, they just embraced him. It was all good. Just a real interested community.”

Not only interested, but invested. Pets for Vets was given $10,000 from donations raised at the Furry Con. Cheryl and Link came back with a new appreciation of the furry subculture as well.

“I train puppies and do training with Canine Good Citizen and do trip training, and you cannot replicate what that one afternoon of walking him through every imaginable costume and scenario, with all of these different people and being in a new place,” she said. “I was talking to one of the moms [of a furry], while I was sitting at our [Pets for Vets] booth, and she said a lot of these kids just aren’t understood. Her son got into it, and she said sometimes they don’t have the confidence to move around comfortably — socially, in groups — but they put on these costumes, and they’re transformed.” 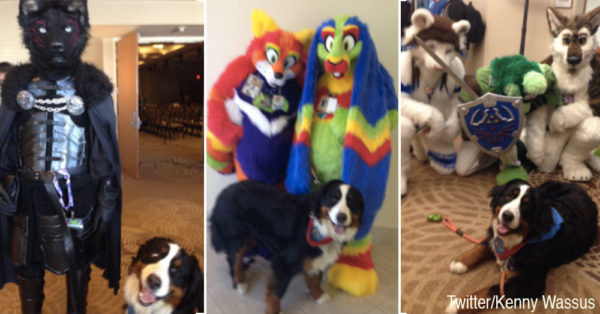 The Animal Rescue Site wishes the best to the Wassus family and Pets for Vets, a wonderful organization helping out our nation’s bravest. Veterans coming home with traumatic brain injury or post-traumatic stress issues face an entirely new battle. The VA’s U.S. Veteran Service Dog Program covers the cost of service dogs only in cases of physical disability. Dogs for mobility, hearing, or sight are covered, but dogs for psychiatric issues like PTSD are not. The VA claims that there is not enough evidence to show that the dogs are efficacious despite countless studies to the contrary.

Service dogs for PTSD can be part of an effective treatment which improves the quality of veterans’ lives, which is why the VA MUST cover the cost of service dogs for psychiatric conditions. Click the button below and tell the VA to change the U.S. Veteran Service Dog Program to cover service dogs for any troop that needs one!

PTSD service dogs can lessen a veteran’s perception of physical pain, decrease agitation and aggression, increase social interaction and ability to manage daily living, lower blood pressure and heart rate, decrease loneliness, and ease anxiety or depression. Service dogs for PTSD can be part of an effective treatment which improves the quality of veterans’ lives, which is why the VA MUST cover the cost of service dogs for psychiatric conditions!
Help Our Heroes Now!
Make a difference