Quilty has been locked up for repeat offenses. The rescue cat at Friends For Life Animal Rescue and Adoption Organization was placed in solitary confinement for breaking his fellow felines out of their kennels, “repeatedly, several times a day.”

According to CBS News, Quilty’s permanent record reflects an equally sordid past. Before the cat arrived at the rescue, he was known for opening closed doors through which a canine partner in crime would slip through.

After his punishment was shared on social media, the hashtag #FreeQuilty began accompanying pleas for the cat’s release (shared by shelter workers, no less!). But the protest was shortlived. Despite their best efforts, even staff at the shelter could not keep Quilty in confinement for long.

TODAY, a new day to judge humans. Never give up on your dreams, fam. XOXO See you guys in a few hours. . . . #freeQuilty #NoMoreDoors #QuiltyNotGuilty

“Quilty will not be contained. And he has no shame,” the shelter posted to Facebook. “We have since Quilty-proofed the cat room, while he took a brief hiatus in the lobby.

“His roommates missed him while he was banished to the lobby. They enjoyed their nighttime escapades around the shelter. The staff, however, did not miss the morning cat wrangling, so we’ll just have to agree to disagree there.”

Quilty, not satisfied with merely breaking out of the poke, managed to sneak in on a staff meeting a short while later.

His escapades have garnered no shortage of attention, but Quilty was still looking for a forever home days after his story went viral. His story reads as follows:

“I do know that I like to open closed doors. When I see one it challenges me, and I work hard to get it open and I’m usually successful.” 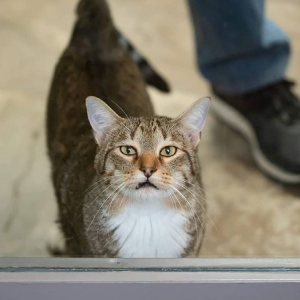 Several potential pet parents have been in to visit Quilty. It looks like he may be have a new set of doors to open in the near future.

“He hasn’t shown any slickness at all yet; he is the most loving and affectionate cat I have ever met!” one visitor told the shelter.

This Tiny Stray Kitten Became A Cuddling Mascot For 9-1-1 Dispatch Center: Click “Next” below!