Wounded And Abandoned At A Grocery Store, This Pooch Gets His Happily Ever After!

Meet Frankie! He’s a pit bull puppy that’s filled to the brim with energy. He was found abandoned near a grocery store and was covered in cuts and bruises. He was rescued by a kind couple and brought to the Vet Ranch clinic for treatment. His doctor just happened to be none other than Dr. Matt.

According to Dr. Matt, they were unable to determine the cause of Frankie’s wounds. They couldn’t tell if another animal had attacked him or if a human caused the injuries. Either way, Frankie didn’t let his various cuts and bruises stop him from happily exploring his new surroundings. He was still as playful and energetic as any other pooch. It was as if he didn’t even realize he had been injured. Despite his playful attitude, Frankie still needed to be healed. So Dr. Matt gave Frankie a nice dose of anesthesia and set to work. Dr. Matt shaved down Frankie’s fur in the areas that the wounds were in, cleaned them out, and stitched them up. 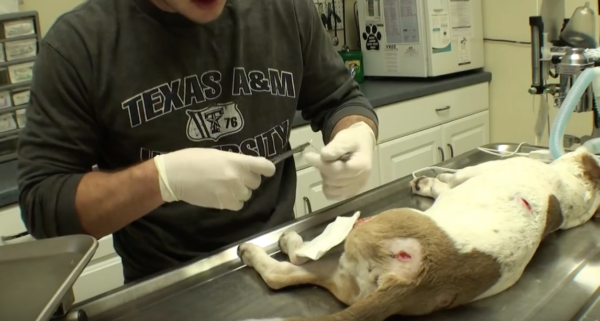 After his wounds were all stitched, Frankie was given some pain medication and antibiotics to help him heal and get rid of any infections that may have set into the wounds. About a week after his arrival at Vet Ranch, Frankie was doing much better. His wounds were beginning to heal and the only thing left was to remove the stitches when his wounds were fully healed. In an amazing turn of events, the couple that rescued him decided that they wanted Frankie to join their family! Dr. Matt gladly gave Frankie a clean bill of health and sent him off to his forever home.