Three neglected pitbull puppies were rescued from a backyard in Georgia after suffering in the heat with no shelter. One of the 7-week-old puppies was dragging his hind legs and had a wounded paw.

Friends to the Forlorn Pitbull Rescue took in the puppies and found them loving foster homes. They named the puppy unable to walk Augie and brought him to a vet to be examined. 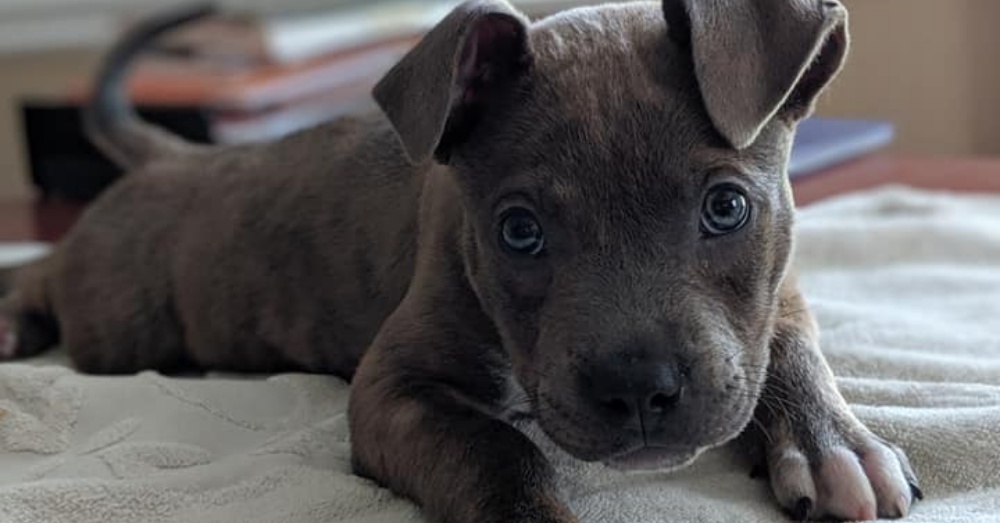 Iris, Augie’s foster mom, told The Dodo about the examination, “He (The vet) said to me at the time. He has neurological issues. He will never be able to walk.”

However, Iris wasn’t taking no for an answer and embarked on a year-long journey to help Augie learn to walk. The first step was making sure his injured paw healed, which it did but remained deformed. The next step was to teach the puppy to use his hind legs. 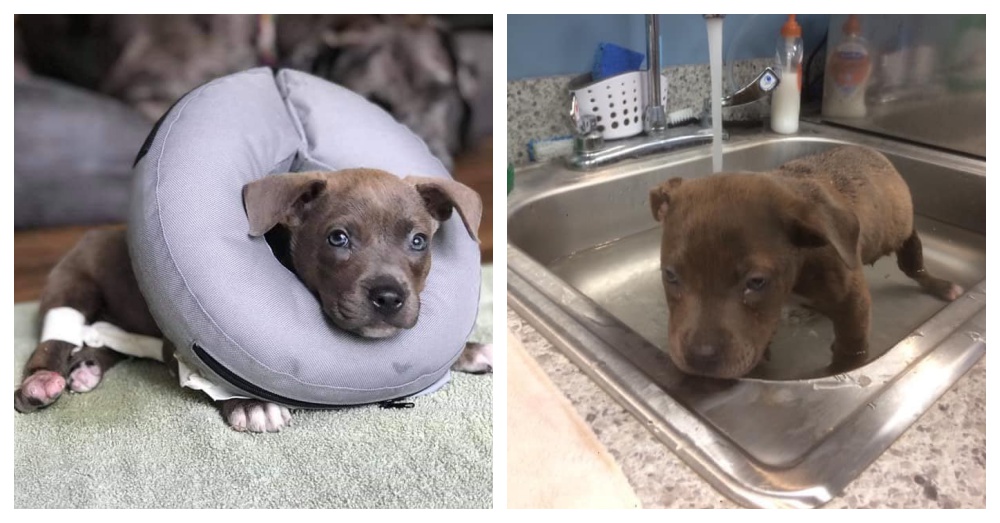 This process involved many steps to strengthen his muscles and teach him to use all four feet. Iris placed Augie on a treadmill and manually helped him move his hind legs and then they progressed to an underwater treadmill. However, when the puppy turned 5 months old, the vet discovered he also had severe hip dysplasia on his left hind leg. 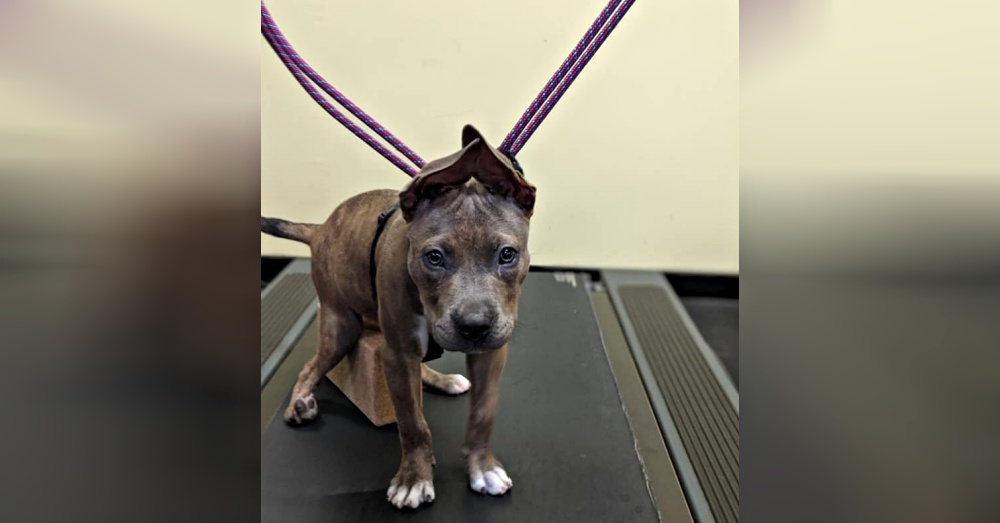 The only option was to perform an FHO surgery to correct the hip dysplasia and give him the best chance at a normal life.

All the while, Augie remained a happy and playful puppy who didn’t even realize he was different. His front legs were very strong and he managed to get around just fine. But Iris wasn’t giving up. 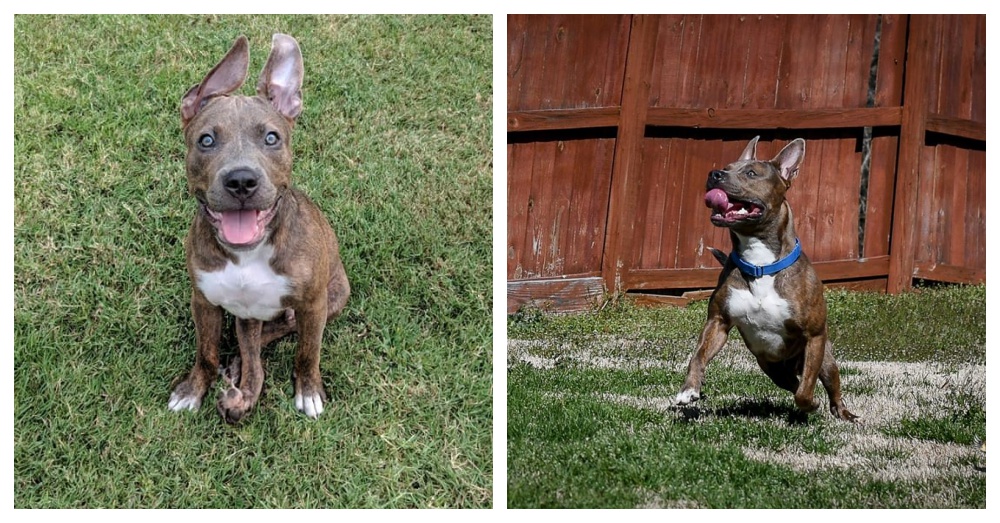 “We tried 99 things and so far we know that 99 things don’t work,” she said after trying countless mechanisms.

Augie was started on regular acupuncture treatments, physical therapy, and hind leg strengthening using Therabands, and suddenly he started to use his hind legs. 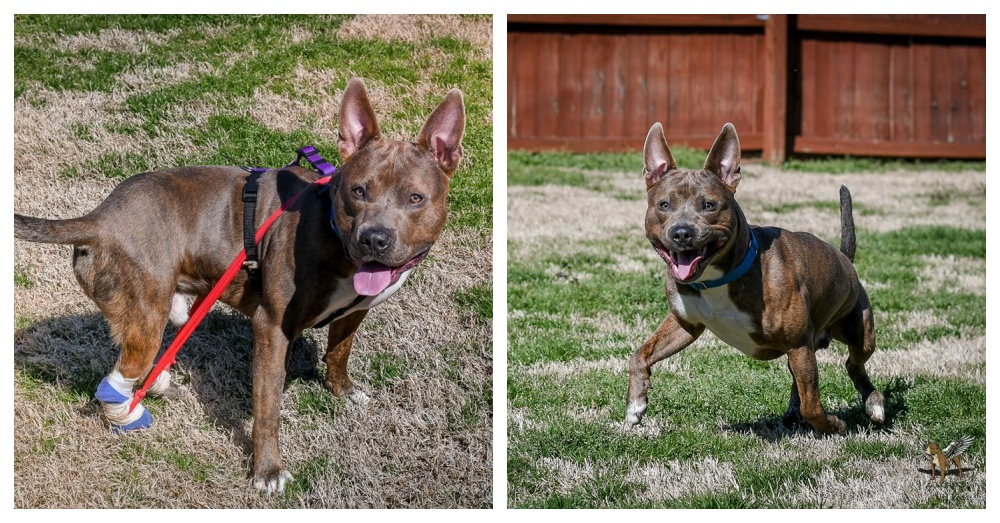 He now walks on his own, although it’s not like other dogs and a little wobbly. However, it is a work in progress.

To assist the sweet boy, he was fitted for a set of wheels to help him get around when he gets tired and to continue to build strength in his hind legs. His “mini wheels” don’t restrict him in any way. “It is so funny to watch him; he spins, runs, and has fun just like every other dog – he LOVES them!” 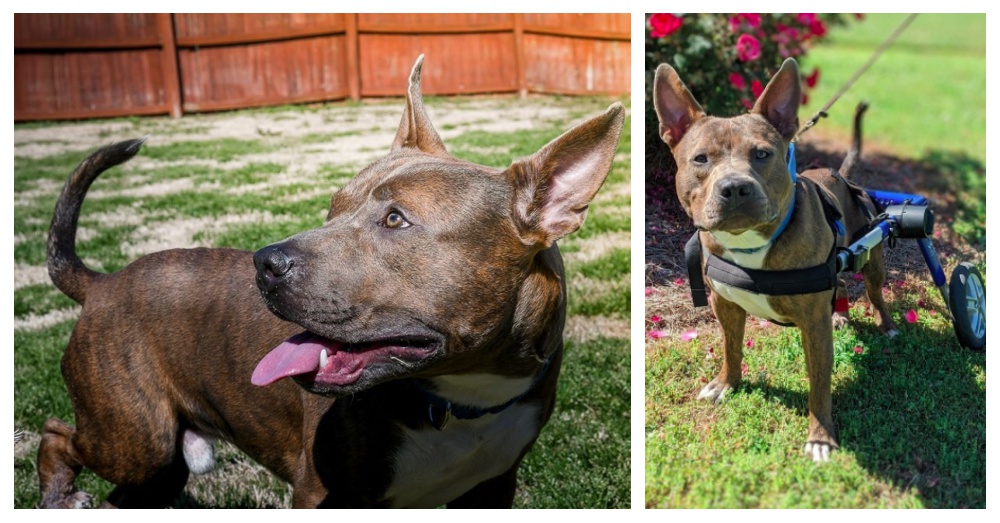 His foster mom says she only uses his wheels, which take a mere 30 seconds to set up, for long walks. Otherwise, he does zoomies in the backyard and plays with other dogs with no issue. “When he plays with dogs or gets tired, he still drags his hind legs at times, but we feel he will overcome this too,” wrote the rescue.

Now that he is able to get around on his own and is progressing, Iris feels he is ready for his forever home. Although she will miss him terribly, she knows there is a perfect home for him and she will help another. 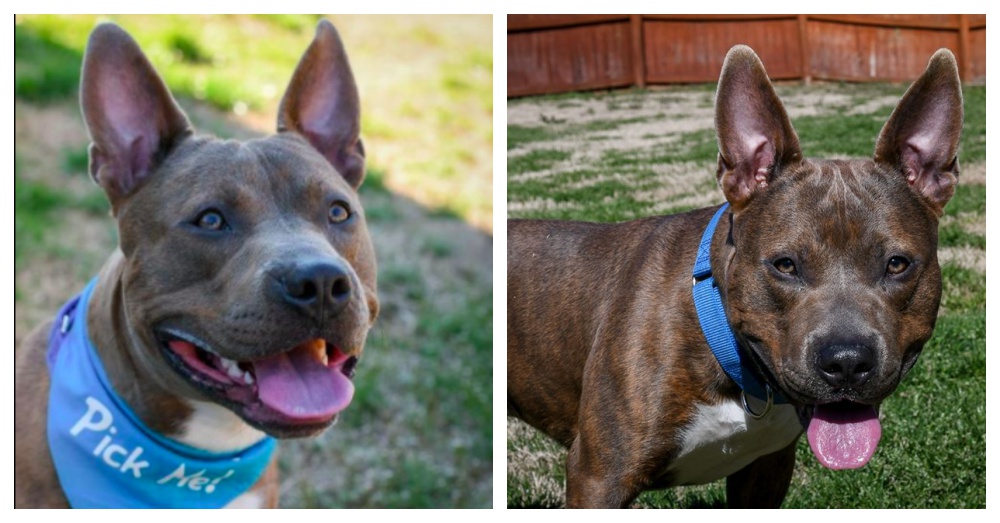 Augie is an inspiration to use all and absolutely loves life. He is looking for a forever home with another dog to play with and preferably a home without stairs. He’s house trained and feels comfortable in a crate but loves to snuggle on the couch. “If you want a dog that inspires you to make the best out of life, Augie is your guy!”

Learn more about Augie and his transformation in the video below. Don’t forget to share to help find him a loving forever home.