(Warning: The video below does contain some graphic footage. The graphic footage ends at time stamp 5:16, so if it is something you do not wish to see, skip it. I promise the story has a happy ending.)

Flynn was brought to Vet Ranch from San Antonio, Texas after being gravely injured when a car hit him. He was so badly injured that Vet Ranch wasn’t sure that he would survive. He had gaping wounds on both sides of his neck that went down to the muscle. Along with his neck wounds, his ears were seriously injured as well and he had various cuts and scrapes along the rest of his body. Dr. Wendy believed that the car accident wasn’t the only thing that damaged poor Flynn; she thinks that Flynn had been used as a ‘bait dog’ but with no proof the only thing that Dr. Wendy could do was try to heal him.

Wanting to ease the pain that Flynn was in, Dr. Wendy set to work. She gave him some strong pain medication to ease some of his suffering and began to clean his wounds and bandage them because they were too large to stitch close. By day 5 of is treatment, Flynn was healthy enough that they were able to administer anesthesia. It was also on day 5 that Dr. Wendy had to cut off the dead tissue that his ear had become. By the time day 8 rolled around, Flynn’s wounds were healed enough that Dr. Wendy was able to begin stitching them closed. On day 9, Flynn had taken a turn for the better. He was up and moving! And had finally started to eat! And on Day 16 the larger of his neck wounds was finally able to be stitched closed. 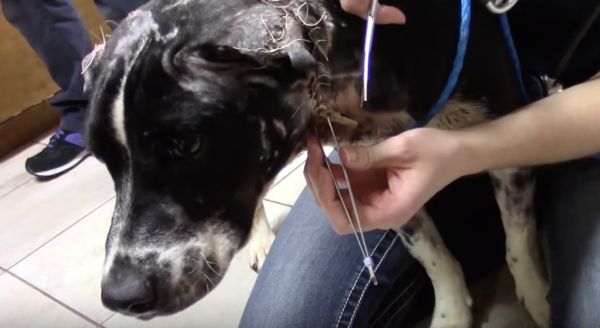 Flynn endured a very long recovery process. But after a very long month of recovery, a lot of surgeries, and the loss of both ears (he did maintain his hearing) Flynn was finally given a clean bill of health and sent to live in a foster home where he will receive all the love he could ask for.
Share on Facebook
Share on Facebook