Three Baby Raccoons Wandered Across A Creek And Made Some Interesting New Friends!

In Wooster, Ohio raccoons attacked a fisherman… well, they attacked with lots of furry hugs! The fisherman was at a creek when he saw three bay raccoons swimming straight for him. Once on land, they immediately went towards the fisherman and climbed on top of him in search of some affection, the fisherman was happy to oblige. The three baby raccoons decided that this fisherman was now their friend and began to follow him wherever he went. The fisherman was, once again, happy to let these friendly critters do as they pleased. This sweet fisherman lets these furry babies use him as their very own jungle gym and shower him with little kisses. 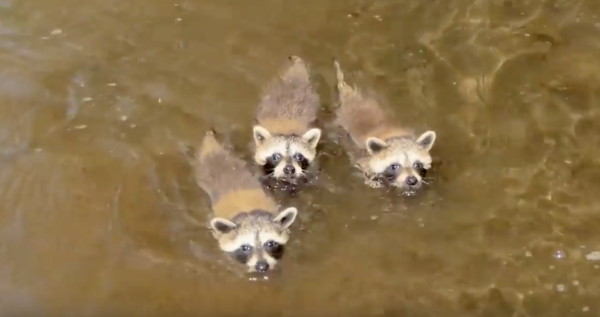 When another fisherman happened upon the scene, he joined in on the fun. He fed the furry babies some fish and even built them a shelter! According to National Geographic, it is perfectly okay to build a shelter in the wild for baby raccoons if it seems as if their mother is missing. And since neither fishermen could locate the babies’ mother, they can’t be sure if the raccoons just wandered away from their home or if they had been abandoned. By building them a shelter, the second fisherman was providing them a safe place to call home.

While baby raccoons are friendly in the wild and have no problem interacting with humans, it is stressed in the video below that raccoons should never be used as pets because they are wild animals and are hard to tame. So while these raccoon babies will not be finding a forever home with their fishermen pals, they did make some great playmates!
Share on Facebook
Share on Facebook