From A Cruel Owner To The Cruel Streets Of Tijuana, This Pooch Gets A Brand New Start!

Dwayne “The Rock” is Pointer that earned his name solely due to his inner strength and his ability to remain kind and loving despite the abuse that he had been dealt with.

Found on the streets of Tijuana, Dwayne was severely injured. He had suffered serious abuse at the hands of his owner. His owner would repeatedly beat him and even went as far as fashioning a muzzle for Dwayne out of wire. This caused his snout to become misshapen. Eventually, Dwayne’s owner was arrested for charges unrelated to animal abuse. 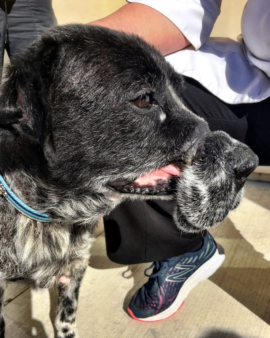 His owner’s arrest should have been the end of it. But unfortunately, with no one to care for him, Dwayne took the streets of Tijuana for safety and shelter. However, he did not find this. Instead, he was met with people just as cruel as his previous owner. According to Peoplepets, Dwayne faced even more abuse at the hands of locals. As he looked for food and shelter, people would throw things at him. The locals even went as far throwing hot water at him, scalding his skin. 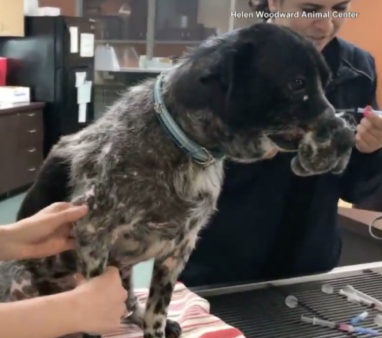 Hope eventually found Dwayne in the form of an independent rescue. The independent rescue was able to take Dwayne off the streets and treat some of his more minor injuries. For the bigger stuff, such as his damaged snout and legs, the rescue reached out for help and found their way to the Helen Woodward Animal Center. Dwayne “The Rock” now resides with a foster parent and is receiving the help and care that he needs through the Helen Woodward Animal Center. He still has a long road to recovery, but each day he is getting a little bit better.

It is an absolute miracle that Dwayne has managed to remain an affectionate and caring dog, despite being faced with the harsh cruelty that resides in the world. His trust in humans is outstanding and now he is a place that will give him all the tools that he needs to finally be able to live a happy life.