Rare Friendship Between A Dolphin And A Dog Goes Viral

Animals have such pure definitions of friendships. Unlike human friendships that are often full of unnecessary drama, animals keep it simple. They seem to know that all you need is someone who cares. It would seem that a dog and a dolphin found a friend in each other. And the pictures are giving us all the feels.

The photos of their friendship have gone viral ever since. People are falling in love with the pictures. They’re so wholesome! There is even one that has the golden retriever pooch licking the dolphin. It is clear that Gunner the dog and Delta the dolphin are absolutely best friends.

The pictures were shared to Twitter by Ken. His upload was captioned, “sorry to interrupt, important news.” And we can’t complain at all, the pictures are the perfect distraction from current events. The photos were uploaded on the 17th of June but in just a week they were shared around 242,000 and have received an incredible 1.3 million likes. 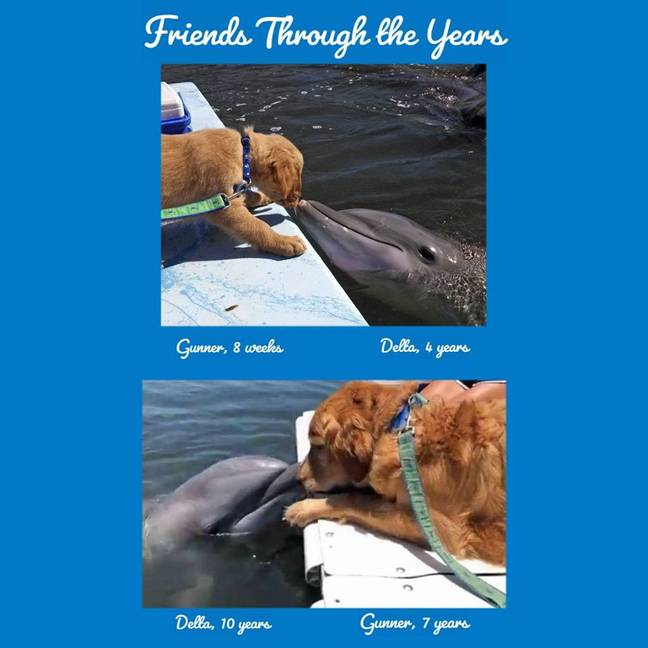 Following the viral fame, Twitter account We Rate Dogs shared some background information about the two friends. As it turns out, Delta has been friends with Gunner ever since the Goldie was a little puppy. That makes their friendship seven years strong as Gunner is seven-years-old. Delta on the other hand, is a little older.

The Dolphin Research Centre in Florida where she lives states that she’s ten-years-old. They opened up as well, explaining that Gunner was eight weeks old when the then-four-year-old dolphin first met him.

We have received information confirming the validity of the photo below. This is Gunner and his water buddy, Delta. Delta lives at a seaside sanctuary in the Florida Keys and has been best friends with Gunner ever since he was a puppy. 13/10 for both https://t.co/doLa57OnxI pic.twitter.com/2YfnYS2Xa8

Given how long they’ve known each other it is not surprising that they are so close with one another. As a result, lots of people were reacting to the friendship. This is the kind of friendship that people could learn a lesson from. All you need is a friend who cares just as much as you.