An estimated five million dogs are eaten in Vietnam each year, most within the Vietnamese capital city of Hanoi.

According to data from the Hanoi Veterinary Department, there are more than 400 businesses trading or slaughtering dogs in the city.

Many of the dogs eaten in Vietnam come from outside the country. In neighboring Thailand, dogs are commonly stolen from their families or taken off the streets of Thailand, thrown into overcrowded crates, which are stacked and illegally transported by truck and by boat to places like Vietnam where dog meat is eaten openly. 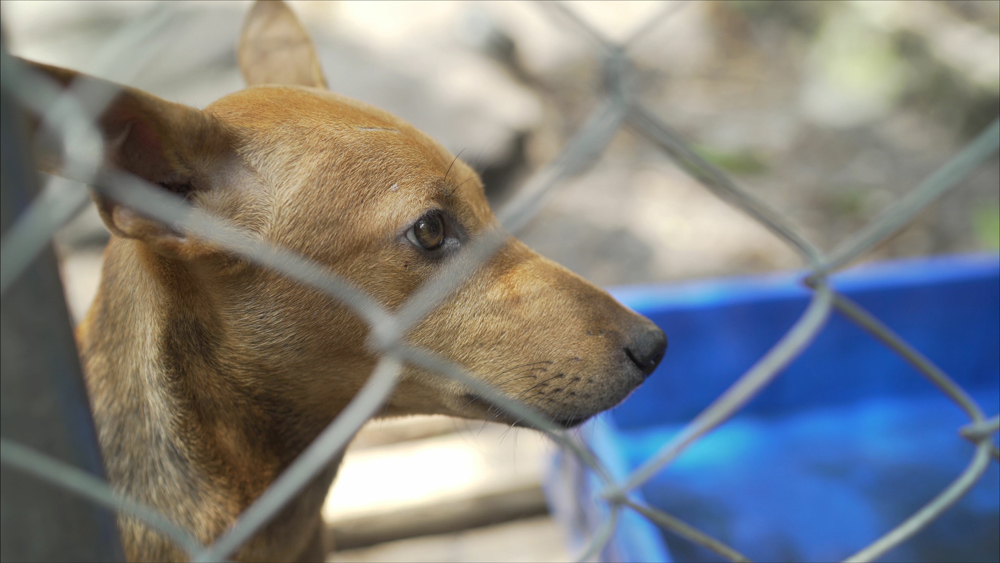 In Vietnam, the dog meat trade is also accompanied by violent crime.

One case involved three teenagers who were tragically killed while fleeing dog thieves during a horrific knife versus stun gun motorbike chase, Animals Asia reports. In Ho Chi Minh City, police arrested a 23-year-old man for stealing 200 dogs over a seven-month period with the help of a home-made stun gun. And in the north-central province of Thanh Hoa, a commune police chief was seriously injured after dog thieves attacked him with metal bars. The man was taken to a hospitalized with injuries to head, face and arms.

Meat dogs are typically sold for about $50 — much lower than the threshold for criminal charges around $100. This makes it cheaper for dog thieves to steal pets and guard dogs without worrying much about the consequences. 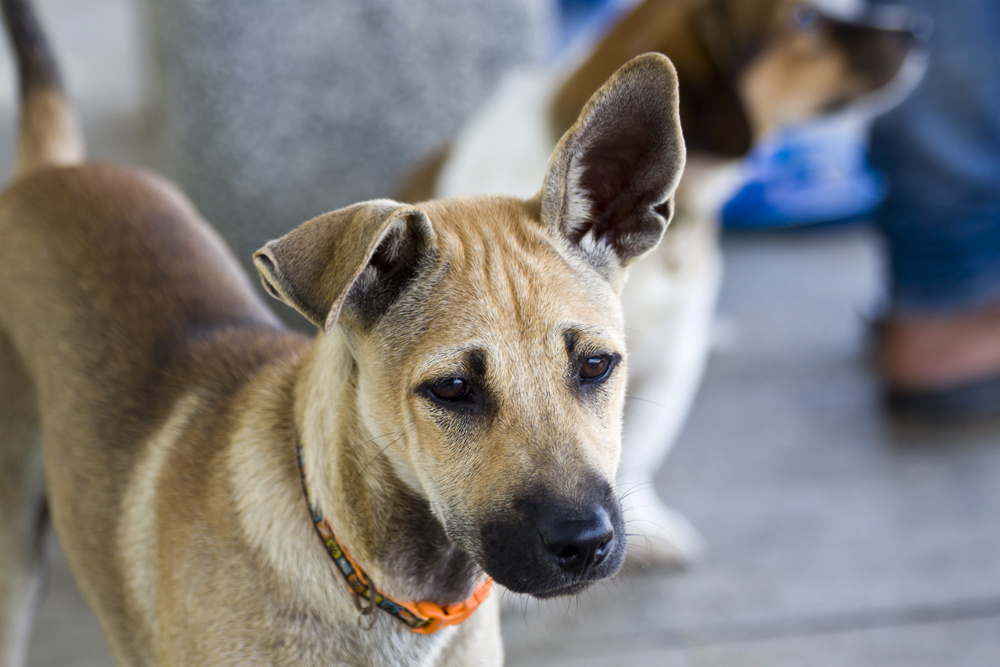 Source: Adobe Stock/Andrey
Pets and street dogs in southeast Asia are routinely stolen by thieves and sold on the black market.

The tradition of eating dog in Vietnam, primarily in the north, has been around for centuries. According to folklore, dog meat is said to increase a man’s virility, warm the blood on cold winter nights and help provide medicinal cures.

As The Guardian reports, some believe an animals are tastier if they suffer more before they die, “which may explain the brutal way dogs are killed in Vietnam – usually by being bludgeoned to death with a heavy metal pipe (this can take 10 to 12 blows), having their throats slit, being stabbed in the chest with a large knife, or being burned alive.”

“I’ve got footage of dogs being force-fed when they get to Vietnam, a bit like foie gras,” said John Dalley, head of the Thailand-based Soi Dog Foundation. “They shove a tube into their stomach and pump solid rice and water in them to increase their weight for sale.”

Others are not so scrupulous, stuffing dead dogs full of rocks to fetch a higher price on the market. 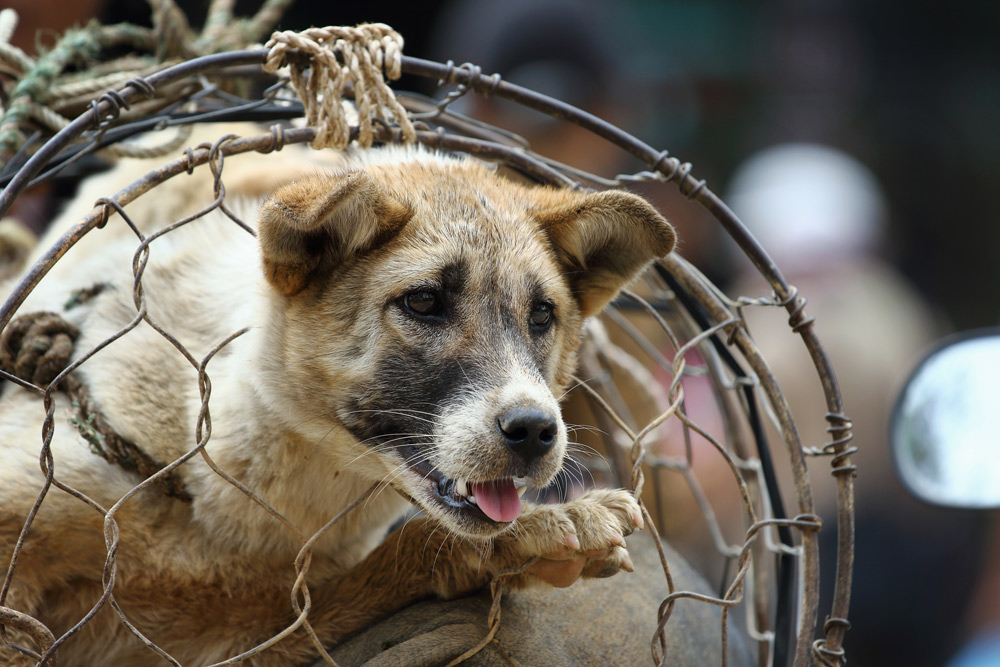 Poor treatment, dehydration, and starvation lead to rampant injury, disease, and death among the dogs during transport. Rabies, cholera, E. Coli, and distemper are all spread by this brutal trade, threatening animal and human populations. On arrival, surviving dogs are met with an inhumane death, their bodies sold to markets and restaurants for profit.

According to a report by PRI’s The World
Dog is not inexpensive. In Vietnam, dog meat costs about three times as much as pork. Owing to this expense is the fact that dogs are not livestock, and there is no efficient way to raise them en masse on intensive farms. 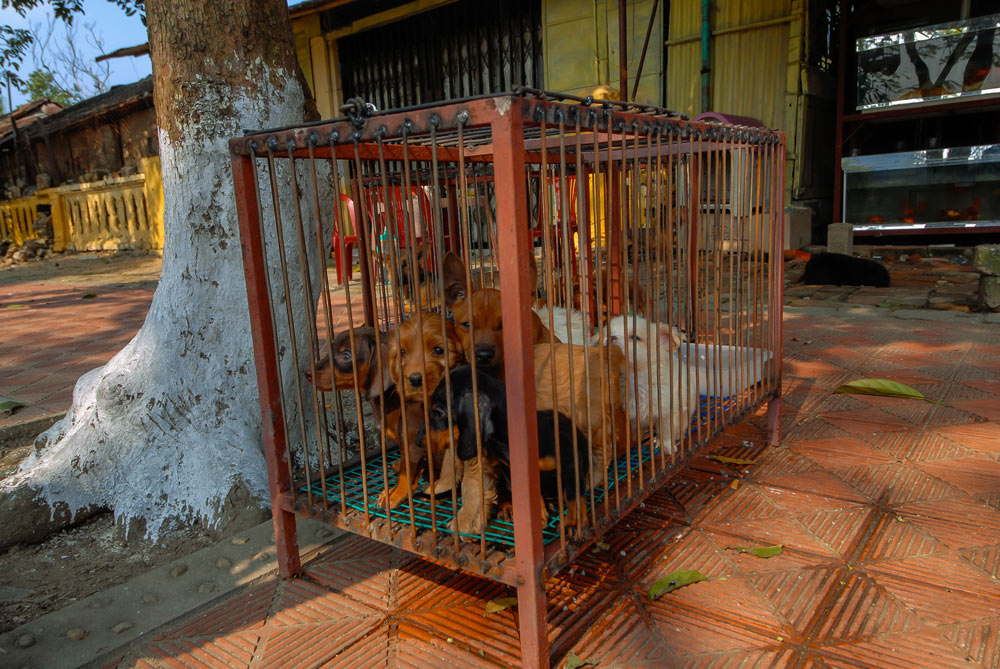 Source: Adobe Stock/Philippe
Dogs are often abused and starved before being slaughtered for meat.

Rosemary Elliott, president of the Australia-based group Sentient: The Veterinary Institute for Animal Ethics, says corraling dogs up tightly is akin to “throwing carnivores into a space and watching them rip each other apart.”

But tastes are changing. A study from FOUR PAWS International showed that, though 60% of Hanoians have eaten dog meat at least once in their lives, 44% say they wouldn’t eat it again. Today, only 11% of Hanoi’s population eat dog meat regularly, while less than 2% do in Ho Chi Minh City.

“People’s outrage is growing with reports of dog meat related illegality coming in daily,” said Animals Asia’s Vietnam Director Tuan Bendixsen. “While we can’t condone any violence, the outpouring of anger is a clear sign that Vietnamese people’s attitudes towards dogs are changing and they won’t tolerate theft or violence towards them.

“The dog meat trade’s Achilles heal is its illegality and that is what we, and our colleagues in ACPA, will continue to stress in our on-going work to end the industry.” 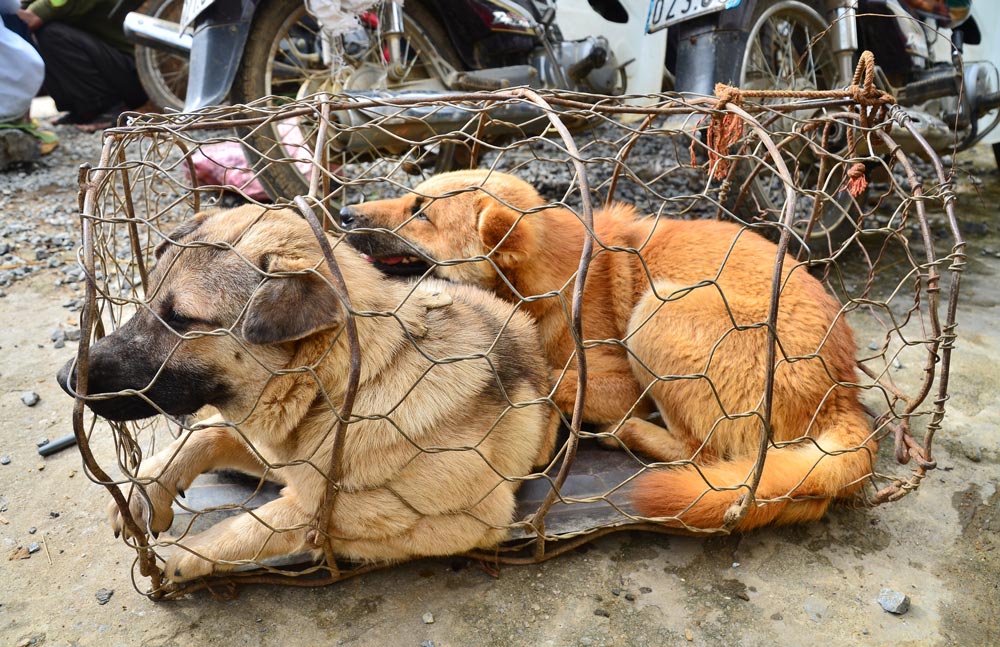 As Globe reports, Hanoi officials in 2018 announced a dog meat ban that would be in full effect in the city centre by 2021. But dog meat yet remains on menus in downtown Hanoi.

Because of coronavirus and global concern about animal meat sold at wet markets, Vietnam is actively reviewing its laws. Zoonotic diseases pose serious health threats to the world’s population, and leaving the dog meat trade to run unchecked could lead to the next global pandemic.

The time to act is now. Click below to make a difference.

Tell Vietnam to Take Dogs Off the Menu! The dog meat trade in Vietnam is horrific, illegal, and inhumane – and must be stopped.

About five million dogs are eaten in Vietnam each year, each of them subject to poor treatment, dehydration, and starvation before they are brutally slaughtered.

This awful practice must end or it will continue to put countless millions at risk.

Tell Vietnam that dogs are not a delicacy!