5,000 Dogs Served In Vietnam And Only 200 Came Back, But Now They’ll Live On Forever

Of the men and women who returned home after serving in the Vietnam War, some owe their lives to their own acts of bravery, others to the valor of the fallen.

A select few even owe their lives to dogs.

At least 5,000 dogs were deployed by the U.S. military during the war, many of them as guard dogs or scouts, JS Online reports. But their tours of duty were not punctuated with yellow ribbons or homecoming parades.

These dogs were never expected to come home. 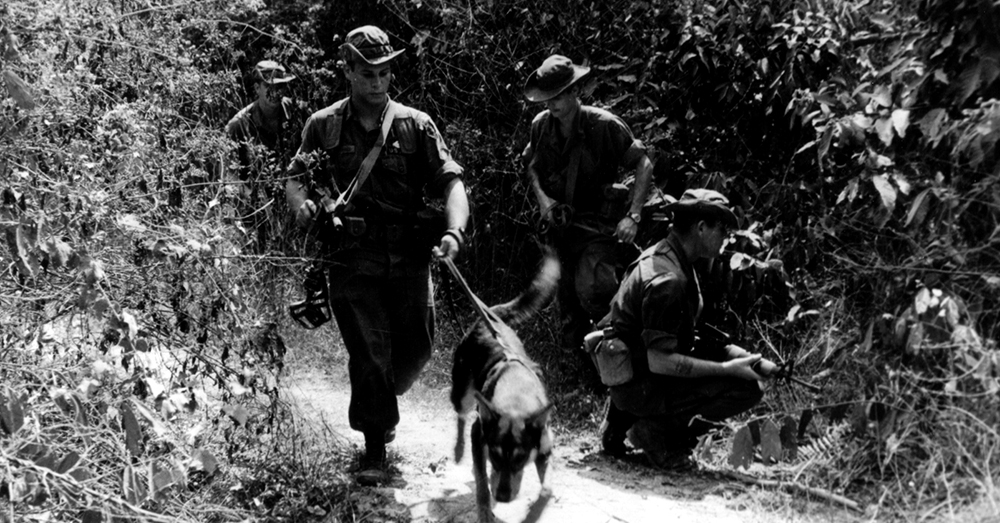 Source: Wikimedia Commons
A scout dog leading a patrol in a search for Vietcong.

They were transferred from one soldier to another until killed in action, or wounded, and euthanized. And before the last chopper left Saigon, most of them were put down, labeled excess equipment by the government. Only 200 of them ever made it back to the United States.

Now, after more than half a century, they’re finally being honored. The recently dedicated Highground Veterans Memorial in Milwaukee features a life-size bronze statue of an American soldier with an M-16 rifle and an Army dog. A German Shepherd, to be precise, modeled after those 74-year-old veteran Mike Voorhees worked with while serving as as Army dog handler in Vietnam. 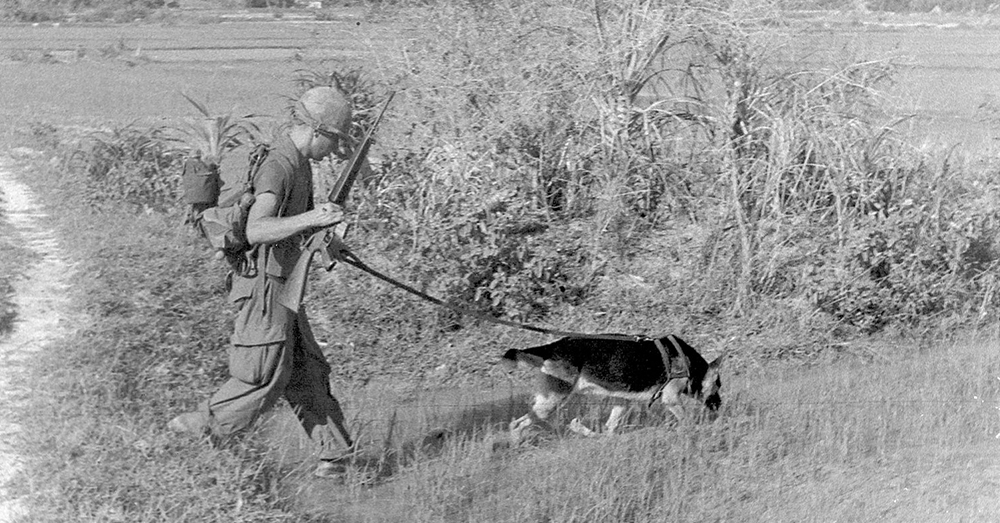 Now a man of the cloth, Voorhees’ time in the service gives him a certain credit others in his field undoubtedly lack. One of the German Shepherds he worked with, named “Satan,” proved invaluable as a comrade.

“I have one distinction no other pastor can say,” he told JS Online. “I can say Satan saved my life at least three times.” 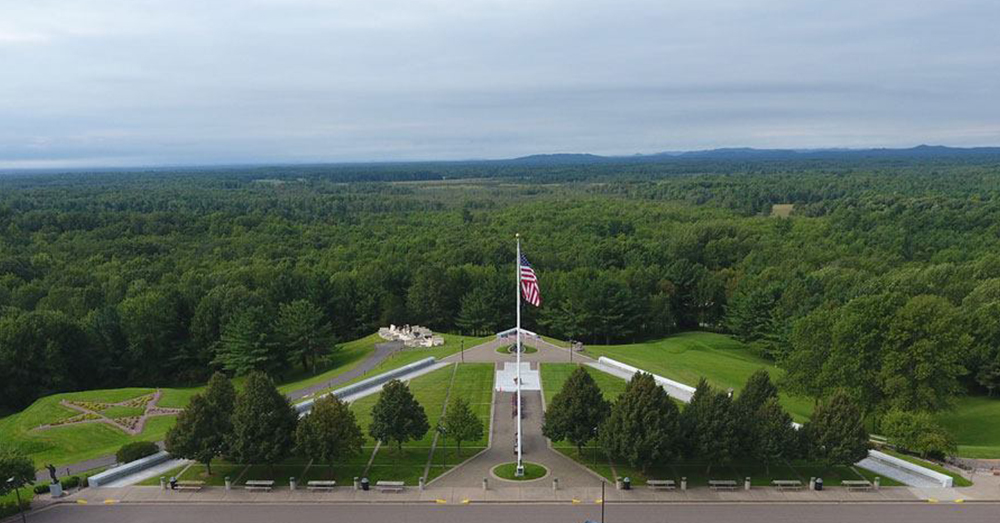 After Voorhees, Satan was transferred in 1967 to the care of Pfc. Erling Anderson. Anderson was killed in battle, and Satan wounded, but the dog recuperated, and went on to serve again. He once found a sniper perched in a tree, detected an abandoned Viet Cong base, and helped soldiers navigate the complex maze of tunnels the VC had built.

“Satan had kind of a hook on the end of his nose and when he smelled something his nose would go up and he would turn his head from side to side, sniffing the air. He would stop at one point and that was usually where the strongest smell was coming from,” Voorhees said. 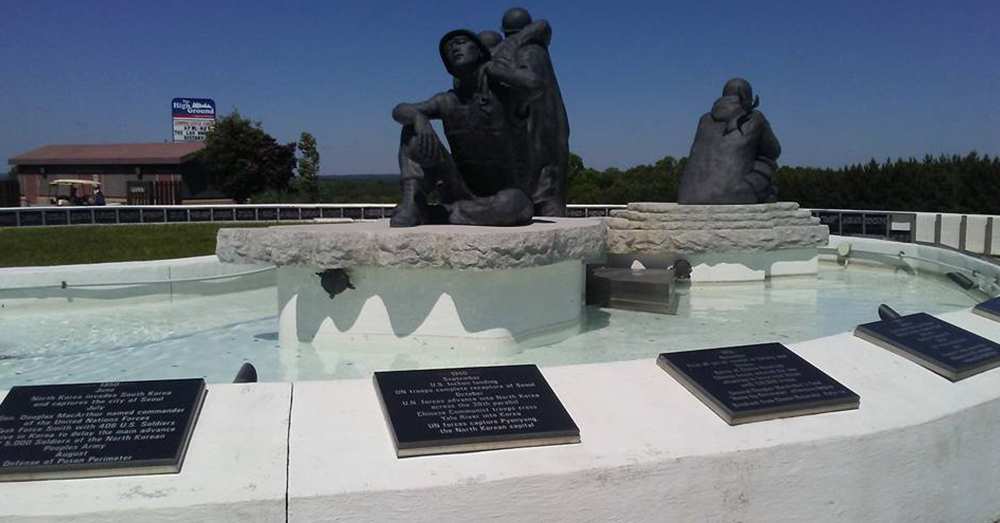 Satan eventually died from a disease he contracted from a jungle tick, but not before saving the lives of several others.

“I’m so grateful that the Highground is doing this,” Voorhees said. “I’m just overwhelmed with gladness and joy that finally the dogs are getting the recognition that they much deserved.”

It was Anderson’s widow, a resident of Eau Claire, Wisc., who offered the story to Navy Corpsman and retired Eau Claire police officer and University of Wisconsin-Eau Claire public safety official David Backstrom. Backstrom carried the story to the Highground park’s board of directors,
“I explained to them that a hero soldier and dog in bronze should be one of the sculptures placed at the Highground. After my 20-minute presentation, they all looked at each other and said ‘It needs to be here,'” he said. 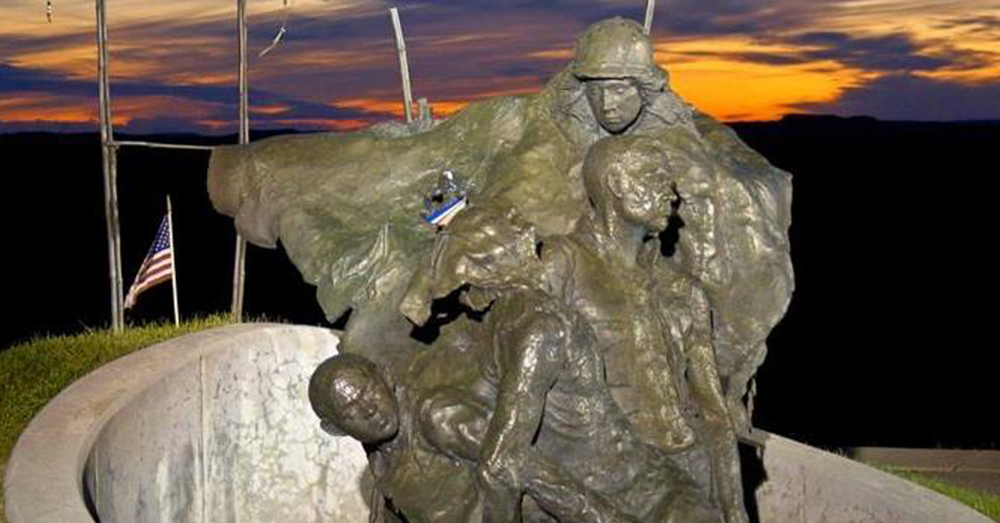 A few years and $200,000 later, the statue was cast by Michael Martino, a sculptor from LaCrosse, Wisc. Martino was picked by a committee of veterans who also suggested adding specific clothing and a second canteen to the work; for the dog, of course.

“I had the soldier kind of crouching down and one leg in front of the other so there’s forward motion while controlling the dog. They’re bonded at the hip,” Martino said. “The idea was the teamwork and closeness of the soldier and dog. It’s kind of an inseparable bond.” 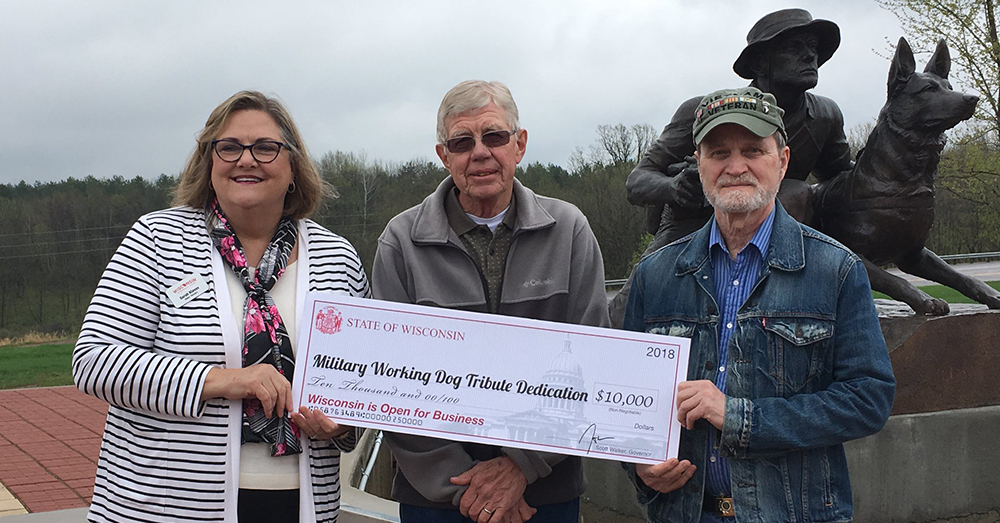 ‘Inseparable’ as they were, it wasn’t until the early-90s that the military updated its policy to bring them home after their work was over. Military Working Dogs (MWD) are now respected as veterans after their service. The same reverence now belongs to those who served in Vietnam.

Voorhees only wishes his buddy Satan was there to see it.

“The only regret I have in my life is I never went to say goodbye to Satan. If I had one minute back in my life, I would say goodbye. I just wonder if, in his mind, he was thinking ‘Where is my master?'” Voorhees said. “I struggle with that.”