Dogs Give Their Brother Kisses Just Before Saying Their Final Goodbyes

Growing up I had a cat named Patch. He was best friends with our dog Bonita. The two of them spent many years together outside in the backyard chilling. They’d take naps together in the sun, chase birds together, sit beside the barbecue grill in summertime waiting for scraps, and share the same water dish – Patch had his own but he preferred to share Bonita’s. Patch was the runt of the litter, but he also a bit of a ruffian, and would often get into scrapes with the other neighborhood cats that he enjoyed bullying. That is really when you could see the depth of their bond.

Bonita would be beside herself with worry, running around the yard and howling, desperately trying to get out like “I hear my homeboy in a fight! Let me help!” Then, Patch would return to the yard victorious and sporting a tuft of the other cat’s fur in his mouth. Bonita would run up to him, whining and wagging her tail, and covering him in kisses. Patch, in typical cat form, and just off the high of another successful fight, would swat her away only to return a few minutes later with an affectionate headbutt. When Patch passes away in 2010, Bonita grieved her friend for months.

As a kid, I was always reminded by my Uncle Max that animals are very sensitive creatures who feel the same things that we do. People don’t always see it, but they feel things very deeply, and they form strong connections with one another – not just with humans. I will always argue with anyone who says otherwise because pets very much feel love and sadness just like us. So, my fellow animal lovers, get out the tissues, because this story is definitely will definitely pull on the heartstrings as it deals with the enduring love between dogs. 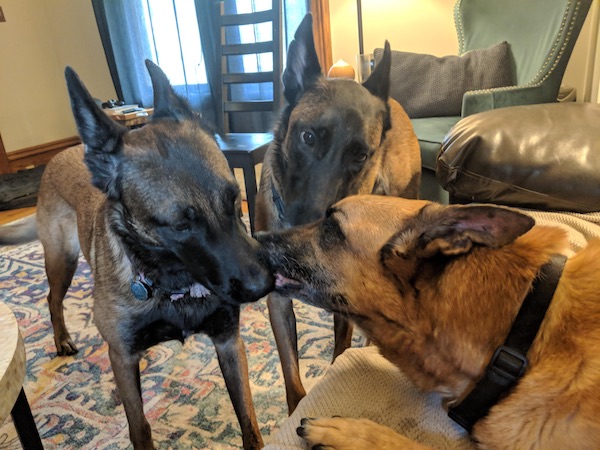 A very touching photo was shared of three Belgian Malinois dogs who were exchanging kisses as they said their final goodbyes. It definitely had animal lovers’ hearts breaking all across social media.

The photo was shared by Reddit user Rawtashk, who took a photo of their eldest dog, 11-year-old Sef, saying goodbye to his family. Sef was put to sleep later on that day.

Rawtashk wrote, “Our old boy is getting put down today. Somehow our other 2 seem to know, and they’ve been saying goodbye all morning.”

The family had previously arranged with their vet to come put Sef to sleep at their house – that way he could be surrounded by his family as he took the final step in life’s journey.

He commented in his post, “You know you have a good boy when your vet doesn’t normally do at-home euthanasia, but she volunteers to come out and do it for Sef.”

He added, revealing, “And that’s what happened this morning. Somehow Rhonin and Jaina both knew because they kept coming over and giving Sef kisses this morning while we waited for the vet. Sef was able to go peacefully at home, while my wife and I stroked his fur and told him how much we loved him and how much we were going to miss him.

“I love you, Sef. You were the best boy I could have ever asked for. I would have carried you forever, had I been able to, but it wasn’t fair for you,” Rawtashk wrote. 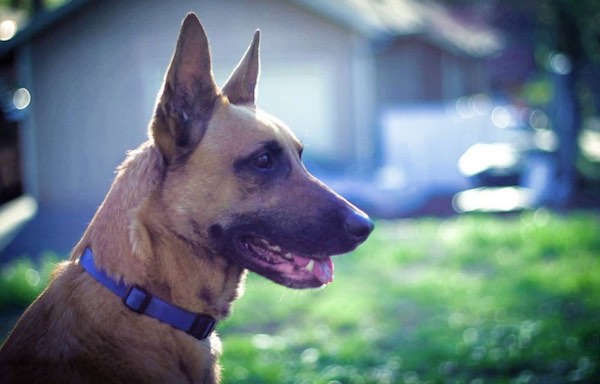 The family also followed up on the original post, writing, “Thanks for the kind words, everyone. We said our goodbyes and he’s getting cremated so we can put his ashes on the mantle next to our first dog. He was the best boy I could have ever asked for. Love you buddy. I hope you had a wonderful time.”

Sef’s owner later revealed to LADbible that since Sef passed away, the other two dogs have been sad.

“We have two dogs still,” he said. “A five-year-old male named Rhonin and a two-year-old female named Jaina. Rhonin has a very soft personality, and I can tell he still thinks something is wrong, although that might just be because he’s picking up on my general demeanor. Jaina is more outgoing and energetic, so she doesn’t seem too phased by it….but last night she did come over to the couch and sniff around at the blanket on the couch that has been Sef’s ‘spot’ for the last five months or so.”

The owner also stated that Jaina knows she’s not allowed on the couch, but nevertheless, jumped up only “curl up where Sef would normally be.”

Sef’s owners are hoping that the people who are moved by Sef’s goodbye will consider supporting a dog rescue and donate to the American Belgian Malinois Rescue in his memory. If you would like to make a donation in Sef’s honor, you can click here.