Over 100 Dogs Are Rescued From A South Korean Meat Farm

More than 100 dogs got a lucky break when the Humane Society International made the announcement that they were bringing them back to the US after having rescued them from the meat trade in South Korea. The dogs will be sent across several states to rescues in Virginia, Pennsylvania, New Jersey, Maryland, and New York. There, these dogs will be ready for adoption.

The HSI rescued 60 dogs from one dog meat farm in May alone, and also managed to get the establishment shut down. Even though the HSI is embroiled in a mission to shut down these meat markets, they aren’t leaving the dog meat farmers without a trade afterward. As the HSI has relayed, they work “with dog meat farmers to permanently close down dog meat farms and help them switch to alternative livelihoods.” 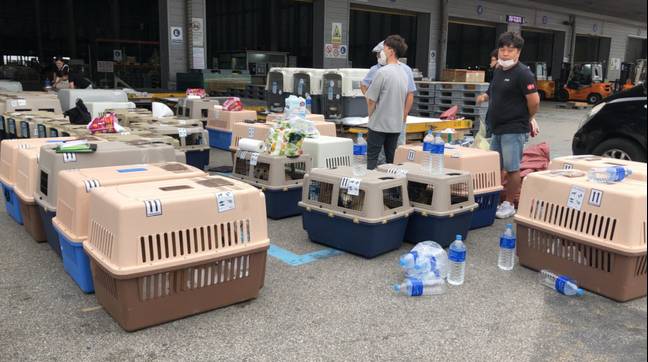 The HSI released a statement that revealed how dog meat is consumed across several Asian countries, but South Korea has the largest ratio of farming. There is an estimate that 2 million dogs per year are raised across thousands of dog meat farms in Korea.

As the press release continued, “The conditions on these farms are horrific – most dogs live their entire lives in barren wire cages without adequate shelter or veterinary care until they are brutally slaughtered, usually by electrocution or hanging.”

It is believed that 30 million dogs are annually slaughtered for the meat trade in Asia. The Bok Nal season in South Korea is coming up, which is when dog meat soup – known as “bosintang” – is made. This widely popular soup employs the act of electrocution as part of the process, which is commonly used in the US to kill meat animals as well.

That is why the HSI is constantly putting pressure on governments worldwide in order to get the practice of the dog meat trade banned. The President of the HSI, Jeff Flocken, stated that some countries and governments in Asia have begun to ban the practice – both for animal well-being and public health interests. However, he revealed that the government of South Korea has yet to take action in ending these cruel practices and create a better environment for its dogs.

Flocken added, “During the Bok Nal summer season, many thousands of these dogs will die just to be made into soup, and that’s a habit we’re glad to see Koreans increasingly questioning. But we are also urging President Moon Jae-in to join with other countries across Asia by taking action to dismantle this outdated and cruel industry.”

We can only hope that eventually, with enough pressure, these governments will take animal welfare more seriously for the dogs. As for the lucky 100 that made it out of the country, hopefully, they will all find loving, forever homes where they’ll be spoiled rotten for the rest of their lives.