Losing a friend can be one of the most difficult things we experience in life. Most of us have felt those feelings and it seems as if dogs are also able to experience them.

Harry the Shih Tzu is a great example. He had such a difficult time when George, his best friend passed away. That dog dies and Harry ended up grieving for a year and is still grieving, according to his owner, Caitlin Wynne. 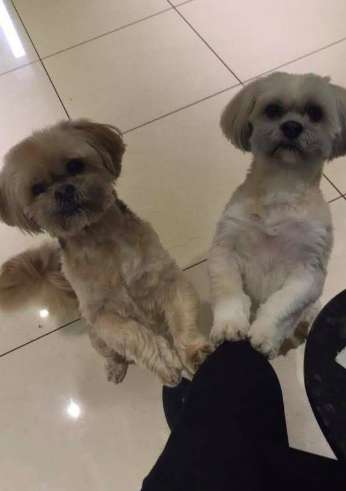 Harry and George hit it off from the moment they met: “We got Harry when George was 7 because it seemed like he needed a friend,” Wynne told The Dodo. “They got on really well. Harry was always more playful and energetic than George, but they’d still play and would always sleep next to each other.”

George also helped Harry with some confidence, helping him with some needed confidence: “Harry couldn’t stand being in a room without him and was very reliant on him,” Wynne said. “Harry was very timid when we got him and is still fairly timid now.”

Although they only had a single dog bed, they didn’t mind. The two slept together every night. Then one day, when George was 15, he got sick. The entire family was heartbroken and Harry did his best to care for his friend.

“They used to share the bed, but when George became ill, Harry slept next to the bed to give him space,” Wynne said. “I slept on the sofa the night before we had George put to sleep to keep him company and Harry was pacing around the room crying. [He] wouldn’t sleep all night, as if he knew something was wrong.” 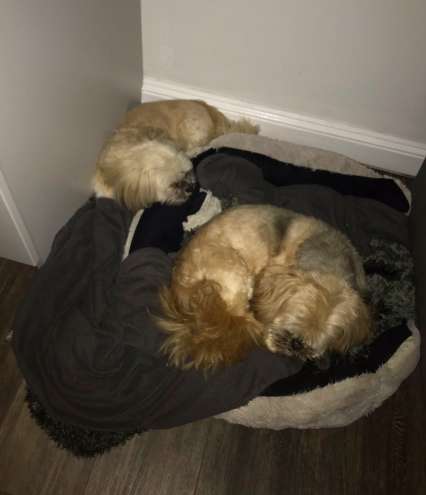 George was not able to recover and the family had to put him to sleep the following day. Harry went with him to the vet and would not leave his side. The last thing George saw before closing his eyes was his best friend, Harry.

Harry still goes to the bed where he and his friend shared their nights. When he lays down, he still leaves a spot for his friend: “He sleeps on the floor to the side of the bed now quite often,” Wynne said, “but I didn’t realize why until I was looking through photos of them both from a year ago.” 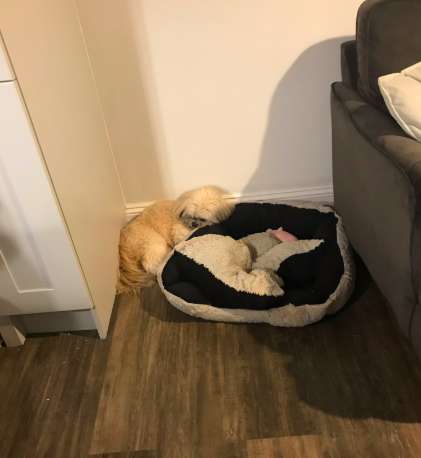 A heartbreaking photo was recently shared on Twitter and other dog owners felt it in their hearts.

Wynee and the entire family are helping the little dog to cope with the loss of his friend. They give him plenty of treats and cuddles and hope that he will heal soon.

They also realize just how special it was that they shared time with each other: “Almost a year on and he clearly still misses George,” Wynne said.