Monty and Rosie are two cockapoos who were born to the same litter nearly a year ago. However, they did not go to the same home. Like many doggie siblings, life sent them off to different forever homes. However, in a twist of fate, they ended up running into one another while out on a walk with their owners.

And the results were incredibly sweet! Their reunion was truly heartwarming to witness as the two long-lost siblings gave one another an actual hug when they came together again. It was clear that they were thrilled to see each other!

The two dogs instantly recognized one another when they saw each other – and there is nothing sweeter than that.

Their reunion was witnessed by a man who then sent it to his daughter, Libby Pincher, who was quick to share the touching moment with the internet. It went viral.

Libby posted a tweet with the picture attached which read, “pls look at what my dad sent me this morning I cannot even.”

Apparently, the text that Libby’s dad sent her, said, “So, Dave was out walking his dog, and there was a couple walking towards him with a white version of his dog. Turns out they are brother and sister from the same litter. But instead of just playing like they do with other dogs, look at this.”

The fact that they could still remember one another is just incredible and so sweet. It just goes to show how bonds among siblings are something unshakeable. 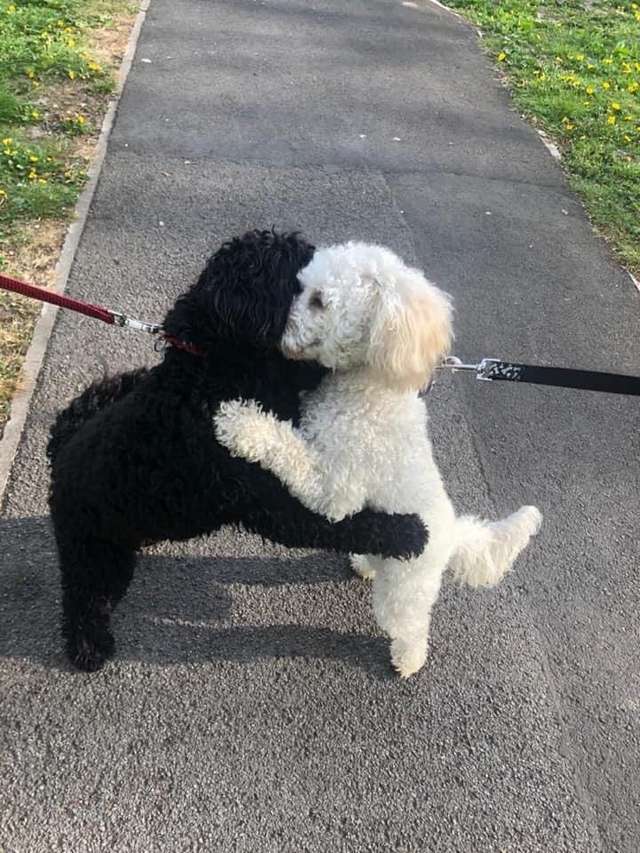 Rosie’s owner, Susan Killip, spoke to The Dodo to discuss the special moment. As she recalled, the two dogs just jumped on one another as though no time had passed.

She said, “It was amazing they remembered each other after 10 months of not seeing each other.”

If this doesn’t make you want to just smile and hug something, then I don’t know what will. We really don’t appreciate just how wonderful dogs are.