They Heard Cries Coming From A Sewage Tank…They Got There Just In Time!

People heard noises coming from a nearby sewage tank in India. It sounded like muffled moans, but they were unsure of exactly what it was. The only way to find out would be to go down and pull out whatever was down there. They alerted Animal Aid, a rescue organization, to see if they could come and help.

Animal Aid arrived at the scene and checked out the hole that led to the sewer tank. They knew some sort of animal was down there and didn’t hesitate to help. One volunteer laid on his stomach and reached down into the hole, while another volunteer held his feet. It was then that they realized the moaning sound was a young dog who was struggling to stay afloat in the water!

He lifted out the soaking wet pup, who was moments away from drowning. If they didn’t come to help this poor dog, he wouldn’t have survived. Luckily, that wasn’t the case and they got him out to safety. They immediately wrapped him in a blanket to dry him off and let him catch his breath. Then they brought him to their organization’s sanctuary. 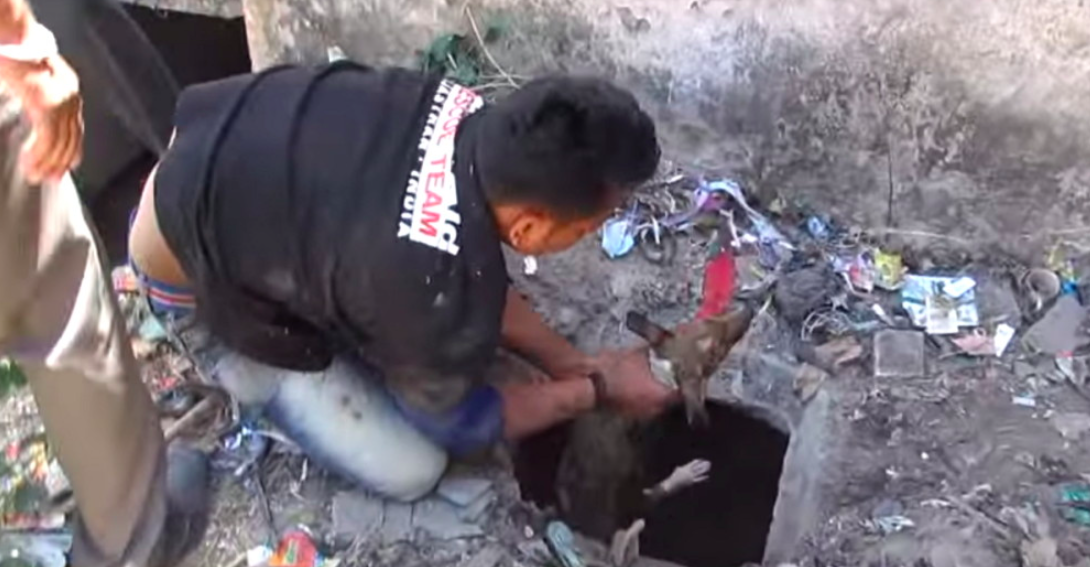 At the sanctuary, they gave him shots, IV fluids, and the proper medical care that he needed. After a little while, he was able to walk on his own. Then he started eating and drinking and acting like a normal pup. He was still very shy and afraid but the volunteers there quickly gained his trust. Thank God they saved this poor dog just in time! Now he will get to live a safe and happy life at their sanctuary!