Labrador Rushes Into The Water And Saves A Drowning Baby Bird

Dogs are more than just happy-go-lucky creatures. They are also highly empathetic as well as quick-witted when it comes to emergencies. If anyone has ever been in a sticky situation and a dog is nearby, you can bet that the dog will happily come to their aid. Which is exactly what happened when one dog noticed that there was a bird struggling in some water.

The heroic dog, Jax, first took notice that there was a baby bird in some water, struggling to stay afloat. The little bird was struggling, and it was clear that it needed to get out of the water quickly, or else it wouldn’t survive.

That is when the pooch jumped into action and went on to rescue the bird. Without hesitation, Jax jumped directly into the water and swam out to where the baby bird was drowning.

It was then with some gentleness and care that the dog scooped up the bird in his mouth, and transported him back to the shore where he’d be safe on dry land. 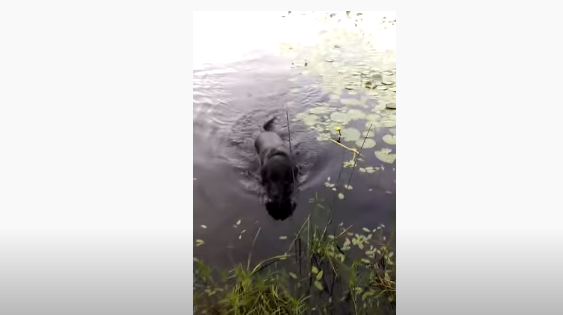 Thanks to Jax’s quick actions, the tiny bird’s life was saved. But Jax isn’t a rarity. In fact, there are many dogs like Jax who leap into action when the situation calls for it. I suppose it’s part of the dog’s nature to protect others without worrying so much about their own safety. It’s the kind of lesson in empathy that we could all stand to be reminded about.

Watch the Jax’s heroic rescue of the baby bird below: