Ask anyone who has a dog and they will tell you that they are amazing creatures. The same is obviously also true of a family who owns a German Shepherd that stays home alone every once in a while.

The brilliance of this dog became clear when security cameras were watching what the dog did in the living room.

At first, the dog was just resting peacefully on the floor when there was a knock on the door. He gets up and walks over to the door, almost as if he was curious as to what was going on.

This is where things get a little unusual. The dog opens the door and accepts a package. He then brings the package back in. The courier is perhaps a little curious as well, so he looks into the apartment but the dog barks to let him know he isn’t welcome inside. 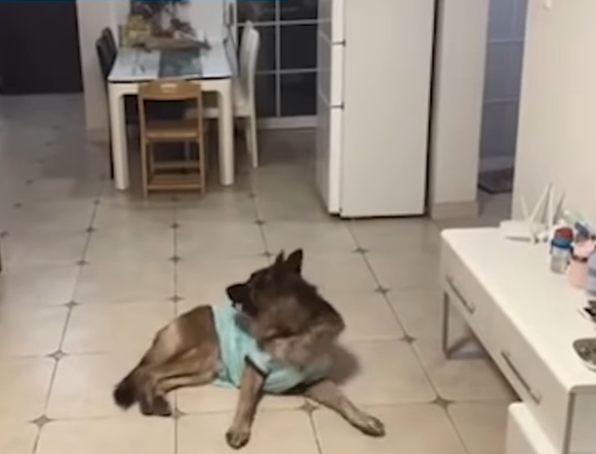 Some viewers are a little suspicious about who the courier actually is.

They think that it might be the dog’s owner and the dog was simply waiting for the next command, which is why he barked at him.

According to one viewer on Reddit: “Cute video but the delivery guy is the dog owner. We can hear the bark clear as day but not a peep from the package guy?” Another joked, “It’s obviously a person in a dog costume these people will believe anything.”

I have to admit, I was a little skeptical as well, but as it turns out, he really is that smart. His name is Nuomi and he helps his human family in many ways around the home.

He has been in the South China Morning Post, and they also have a video of him. They interviewed the carrier, and he says: “I was so scared that I didn’t even have time to take the receipt.”

Nuomi’s dad took the dog to visit the courier so he could give him some snacks and show him that Nuomi is actually a very gentle dog. You can see additional clips of this wonderful German Shepherd in the video below. Have a look, you may just learn something in the process!