Dog ‘Stands Guard’ While A Solider Naps At The Airport

There are few things that are more satisfying than being in the right place at the right time for the perfect photo. The photographers who just so happened to be at the airport in Indianapolis on this fateful day can definitely attest to that.

10 soldiers were not passing through this airport at the time. Typically, this wouldn’t be cause for picture taking but this was a different sort of occasion. These soldiers had two additional soldiers in tow….of the four-legged variety! One of the soldiers was exhausted (understandably so) and decided to catch some quick shut-eye.

However, it’s not always easy to nap in the airport. It’s bright, loud, and there’s always the fear that someone will steal our luggage. However, this soldier definitely did have to worry about that last point! One of the dogs in their group was quick to protect him while he slept. 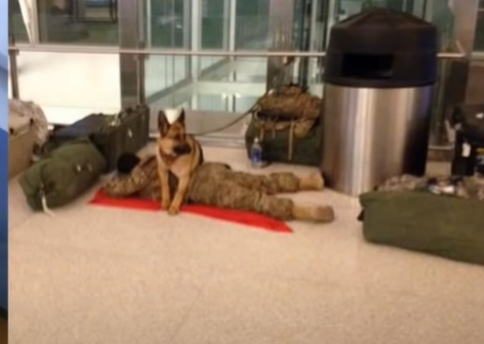 The little battle buddy took their duties very seriously and went above and beyond to make sure that their friend was safe. That’s all that anyone can ask from a bodyguard. These dogs are trained to protect their humans at all times, at all costs, and this is very evident when you see the photo.

Dogs really are man’s best friend and this is all of the proof that we could ever need. Check out the heartwarming moment in the clip below: