In the area of Columbus, Ohio, there are some concerns over dogs being poisoned. Advocates of animals in the local area say they are suspicious of a dog death last week and as many as 11 suspicious cases near that area.

Elaine Putnam received a letter last May in the mail and showed 10TV.

It was addressed to “Fat Girl and Brats,” and read, “Hey Fat Girl, you better figure out a way to stop your f****** dog from barking in the backyard all day or it will get a couple of rat poisoned meatballs. You Decide. Welcome to Melrose Street.”

“I was so scared,” Putnam told WBNS. “Not only for my dog but for my three young children. They are 5 and under and one has autism and likes to put things in his mouth. But he loves to play outside, so you know, any of them could have gotten hurt if there was any kind of poison in my backyard.”

A report was filed with Columbus police but they admitted they couldn’t do much about it. It was recently that police came asking her about a neighbor’s dog they thought may have been poisoned. 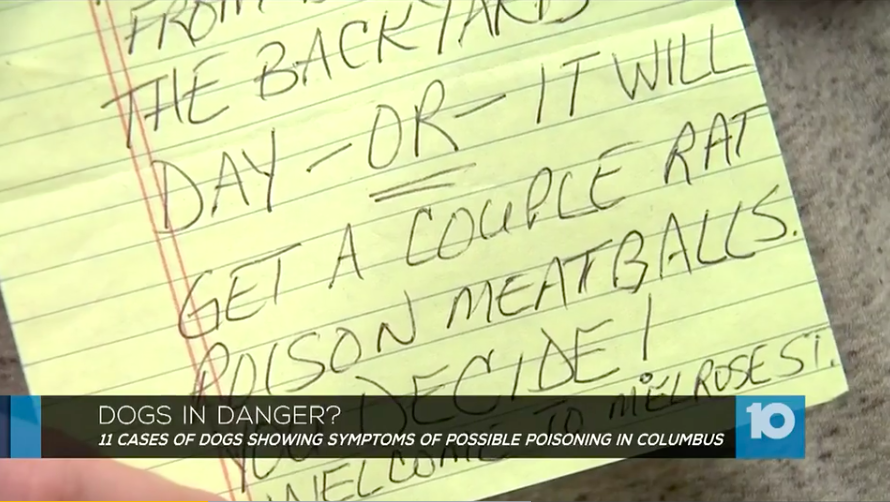 According to Columbus Humane, the death of Alain’s neighbor’s dog is being investigated and a necropsy report is pending.

Another case last week managed to grab the attention of the Franklin County Animal Shelter.

“The dog had symptoms, neurological symptoms. really sick, which our team suspected at that time of possibly being poisoned,” said Director Kay Dickson.

They are piecing things together after the two cases of dogs potentially being poisoned and the letter she received.

“That’s when we went back and started pulling everything from that zip code that we personally had contact with dogs in that area.”

As it turns out, 11 separate incidents of possible dog poisoning exists between Elaine’s ZIP Code and the neighboring ZIP Code within the past year.

“There’s definitely a concern in that area,” said Dickson. “And if I had a pet out in that area, I would definitely be very cautious in letting them out without me by their side. Same thing with my children.”

“It’s heartbreaking and it’s scary and it’s frustrating,” said Putnam. “That someone is actually taking the steps to not only threaten people but actually follow through with those threats.”

A $5000 reward is being offered by Columbus Humane for information leading to an arrest. You can call 614-777-PETS, extension 250 if you have any information.