Owner Thought Her Dog’s Nose Had Fallen Off

It seems like a scene out of a horror movie. It happened when a dog’s owner turned around and thought she saw her pup chewing on his own nose.

You heard it right, Jade Murray was frightened when she thought her French bulldog’s nose had somehow fallen off. She grabbed the pooch quickly and began looking at what she thought would be a terrible wound. That is when she realized that the nose he was chewing on was actually a piece of a toy.

The account was shared by the 23-year-old on Facebook and before long, it was going viral. The post ended up receiving almost 250,000 likes, shares, and comments within a day. 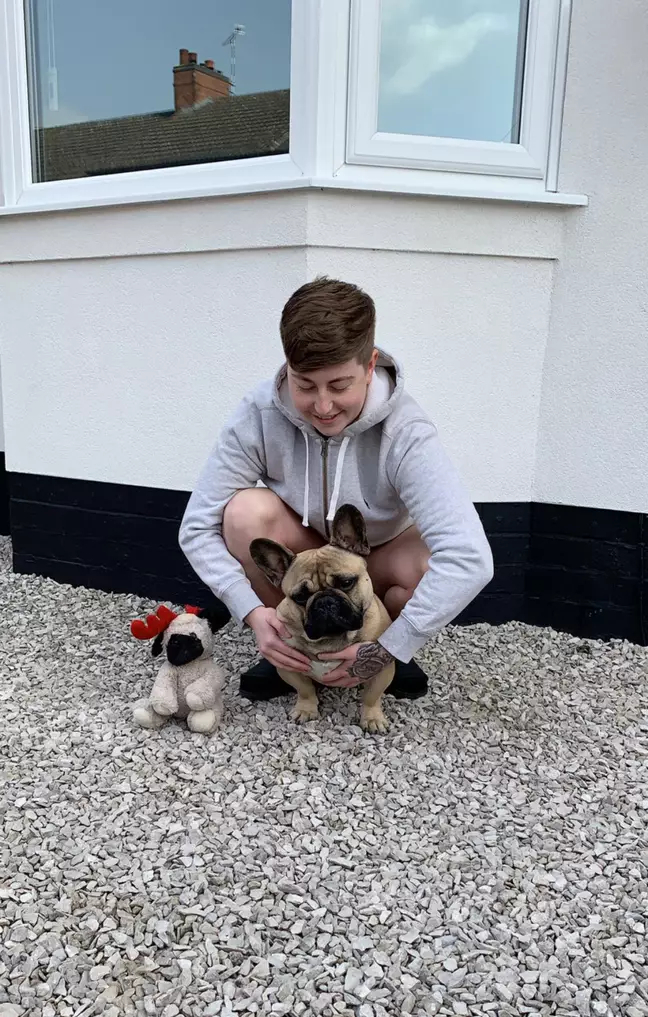 The dog’s owner, from Coventry, West Midlands said: “I did have a moment of absolute panic. I thought, ‘It can’t be his nose, surely not.’

“But it looked exactly the same as his nose, so it was really strange.

“At that point, I had this mad thought – that he didn’t have a nose.

“Eventually I plucked up the courage to pick it up and realized it was plastic and that he must have pulled it off one of his soft toys.

“It all happened so quickly that it didn’t even cross my mind at the time that I might need to take him to the vet’s.” 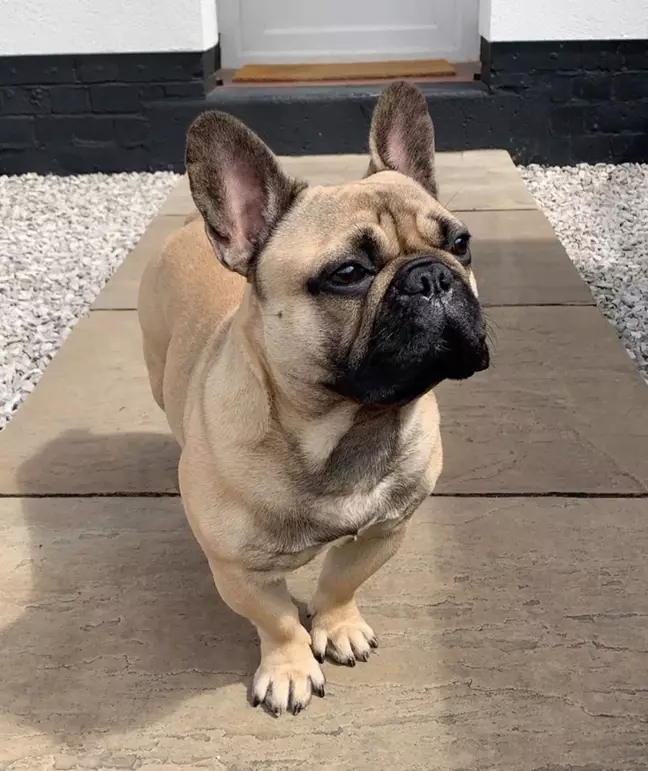 For a moment, she thought that he had chewed off his nose but it didn’t take long until she realized that Lenny was actually chewing on something made of plastic.

Jade added: “It’s only 30 seconds to a minute later that I thought, ‘I’m being stupid,’ and picked it up and it’s plastic.

“I looked at him because he was looking through the gate at me and his nose was still there, so it’s all good.

“As soon as I realized and the panic was over I called my mum to tell her about it as he’s our dog. 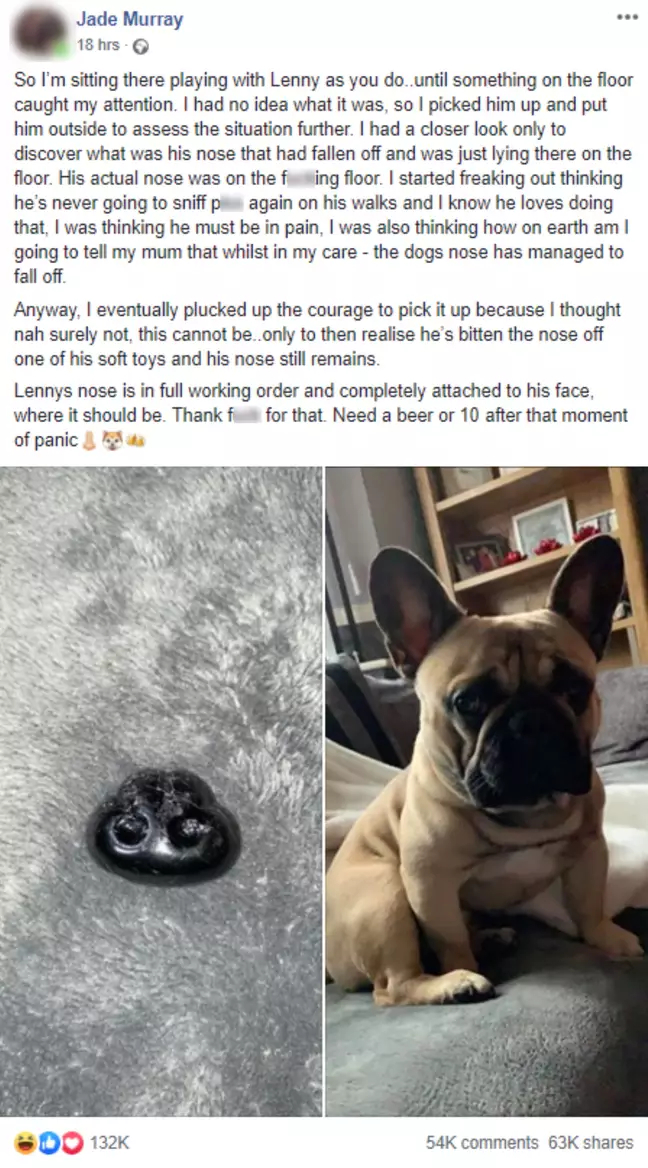 “When I told her, I genuinely thought Lenny’s nose had fallen off when I was playing with him. She was just howling and told me I was an idiot.”

After Jade caught her breath and realized everything was okay, she went on social media to share the story with her friends.

Jade wrote: “Lenny’s nose is in full working order and completely attached to his face, where it should be. Thank f*** for that. Need a beer or 10 after that moment of panic.” 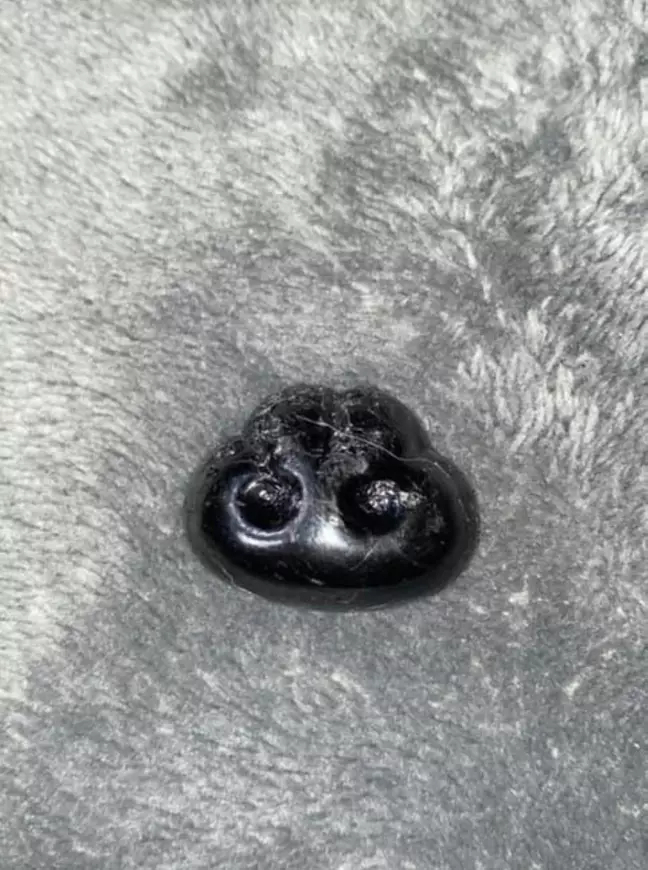 After having some time to look back on the incident, Jade said: “I knew Lenny was a special dog when we picked him, and now he’s an internet sensation. He’s not even one and he’s already going around the world.

“I put the post up about 15 minutes after it happened, once I had typed it out and explained my story. Next thing you know, it’s gone viral. It’s mad.

“Most people found it absolutely hilarious and said the way I described the story made it sound so dramatic but it’s so funny.

“Other people said they can understand why I panicked for a minute because it looks exactly the same.”