From the moment Aeida joined her family in Australia, she and the dog next door, Cashew, have been best friends.

When Aeida first joined her family in Australia, it didn’t take long for her to become instant best friends with the dog next door named Cashew.

The inseparable duo play together and do everything together – so much so, that their families had to think of something to make it easier for the dogs to see one another.

That is when the two families decided to build a doggie door between the two homes. Now, Aeida and Cashew are able to hang out whenever they want. The two canines are joined at the hip, and divide their time between the two houses. Aeida has even gotten close to Cashew’s human siblings.

Nicole Ackehurst, Aeida’s mom, told The Dodo, “Aeida is very friendly and loving. She really just loves everyone and anything — especially our neighbors’ children.”

Recently, Aeida’s parents noticed that she seemed to disappear in the evenings for a period, but just figured that she was off playing with Cashew. But then, their neighbors let them know that Aeida, in fact, was joining the kids’ bath time instead.

“Our neighbors sent us a Facebook message with Aeida sitting in their bathtub,” Ackehurst commented. “We believe that was the first time she had done it.”

Aeida’s parents were quite amused since the stubborn Aeida normally hates to take baths, however, it seems like she’s willing to bend the rules for the kids.

Now, most evenings before bedtime, Aeida heads next door in order to partake in the kids’ bath time. It’s quickly becoming her favorite nighttime ritual, and of course, the neighbors enjoy having her over.

“She will join them at bath time at every chance she gets,” Ackehurst said.
Since Aeida and Cashew are so connected, it’s only natural that both families would see both dogs as a part of the family – so it’s only normal that each gets to participate in the neighbors’ family activities. 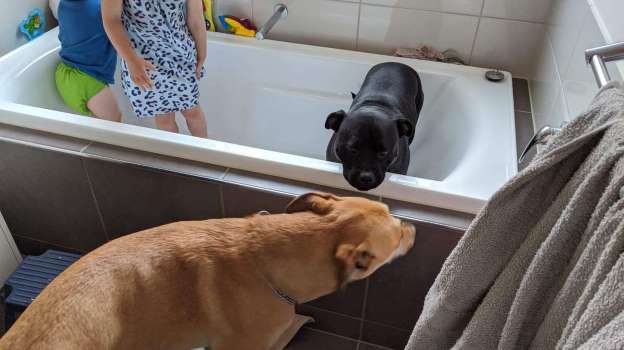 “I’m pretty sure our neighbors love having her over, just as we love having Cashew come over too,” Ackehurst said. “Aeida and Cashew are great friends, and have such a strong bond. They’re both considered great parts of our families.”

If you’re curious to see what other shenanigans Aeida gets up to, you can follow her on Instagram.